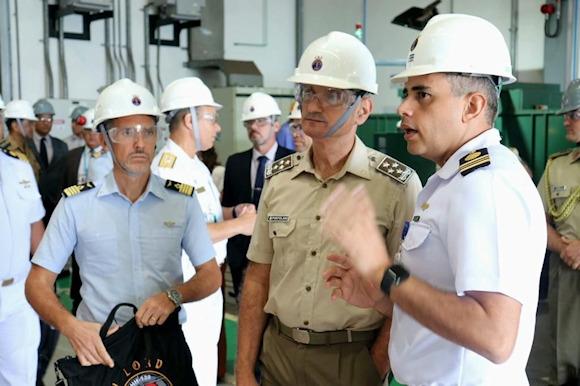 A delegation of Segredifesa, chaired by the general of the army corps Luciano Portolano, secretary general of defense and national director of armaments, has just completed an institutional visit to Brazil in order to strengthen bilateral cooperation in the aerospace, defense and security sector with the South American country and ensure full availability and maximum Italian collaboration, also in modality Government-to-Government (G2G), in the analysis of suitable and quality solutions that can be presented by Italian companies in the sector.

During the works, issues concerning participation in joint scientific and technological cooperation activities as well as the promotion and exchange of knowledge and experience between national defense industries were discussed. The Brazilian authorities have expressed a keen interest and reiterated appreciation for the excellence of the technologies and products of the Italian industries in the aerospace, defense and security sector, in particular those developed in the space and cyber domains; terrestrial - in particular for the new 8x8 armored vehicle for which there is an interest in the initial acquisition of a batch of 98 specimens by 2026, possibly to be extended to further units in the years to come -; maritime, with the off-shore e in-shore patrol vessels, naval anti-mine systems and command and control systems; aircraft, with reference to the advanced training jet / fighter attack and the possible training offer at the International Flight School offices in Italy.

The occasion also allowed the visit of some of the most important Brazilian industrial realities of strategic value, such as the Itaguaì naval complex and the EMGEPROM and CONDOR companies.

The Brazilian authorities stressed the strength of the national defense industrial base which currently accounts for 4,78% of GDP and generates about 2,9 million direct and indirect jobs.

General Portolano highlighted that the visit took place on the basis of excellent friendships and already solid and concrete cooperation that could lead to further development opportunities within the framework of a possible medium-long term strategic partnership.

Among the programs already underway, the Italian-Brazilian combat aircraft AMX should be mentioned; LVM protected tactical vehicles Lynx and 6x6 armored vehicles VBTP-MR Guaranì (jointly developed by the Brazilian Army and Iveco Defense Vehicles); the 105mm cannons Oto mod. 56 supplied to paratroopers and light infantry and to the agreements developed in the helicopter and satellite field with Leonardo and Thales Alenia Space.