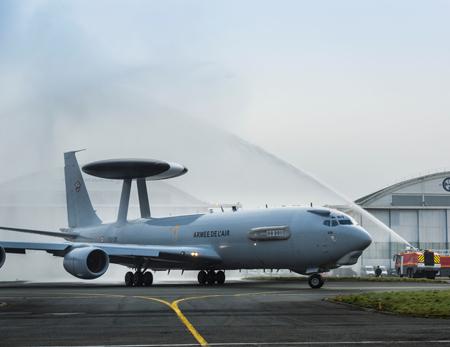 The update is part of an agreement (Foreign Military Sale) of the 2010 between the French Direction Générale de l'Armement (DGA) and the US government.

In June 2013, Boeing, as an AFI KLM E&M subcontractor, began upgrading the aircraft's electrical, mechanical, structural and mission hardware systems. The Mid Life Upgrade - the largest ever for the French AWACS - should provide an even more complete picture of the battlefield and more usable information, reducing the workload of crews.

The aircraft is now subjected to flight and ground tests at the Avord air base, before being delivered by the end of the year, once accepted by the DGA.

The update is modeled on the Block 40 / 45 contract signed by the US AWACS fleet.

The first aircraft was housed in Le Bourget, near Paris, the other three will be upgraded to a new plant at Charles De Gaulle airport.

(in the picture: The E3F is greeted by a water cannon at Le Bourget on January 31 before starting the tests)