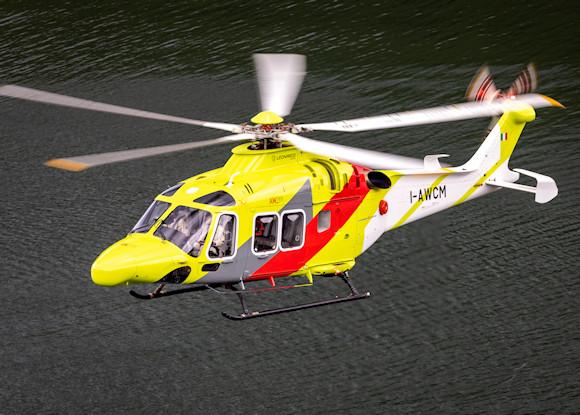 The operational capabilities and configuration options of the AW169 light intermediate twin-engine helicopter continue to grow through some recent EASA (European Aviation Safety Agency) certifications. In particular, these allow the adoption of skates and the exclusive use of advanced autopilot functions for search and rescue tasks (SAR Mode - Search and Rescue) with only one pilot on board according to the rules of IFR (Instrument Flight Rules). These certifications follow further increases in capacity including the introduction of the latest update of the avionics software to the Phase 8 standard and functionality for Offshore missions combined with the HTAWS (Helicopter Terrain Awareness Warning System) for operations in the maritime environment.

The introduction of skids adds to the options already available for the landing gear (retractable and fixed), providing the market with all the expected solutions. This makes the AW169 the only modern helicopter in this certification class capable of offering all options, further demonstrating the design versatility of this helicopter model. This certification will make it possible to start deliveries of helicopters equipped with skids, with the first foreseen for some Italian operators with responsibilities in the field of public safety.

Advanced SAR functions introduce dedicated search paths capable of guiding the helicopter in automatic mode along a predefined route, thus reducing the pilot's workload during this critical phase of the mission. The AW169 is the only helicopter in its weight class to have advanced SAR modes. The high level of automation has made it possible to obtain a certification that also provides for the possibility of having only one pilot on board, making the AW169 the first civilian certified helicopter in the world capable of carrying out SAR operations with this characteristic. Further developments underway in order to further increase options and mission kits include modular auxiliary tanks with capacities between 700 and 880 kg of fuel or the presence of three seats in the third row capable of bringing to eleven (from the current ten) the number of passengers in the cabin, providing operators with an even higher degree of freedom in managing missions, maximizing the versatility of the machine in terms of load and range. These latest innovations are added to the performance enhancement packages certified at the end of 2021 and which further increase the helicopter's behavior in all conditions and for all operational applications, making the AW169 the helicopter model with the best weight / weight ratio. power in its class.

Designed for maximum versatility, the AW169 remains true to this feature which it will maintain in the future in order to meet the most stringent requirements. The AW169 continues to offer new capabilities to operators aiming to achieve the ideal combination of low cost, typical of light helicopters, with the performance, load capacity, cabin space offered by superior models, all combined with a range of constantly expanding support and training services.

The introduction of the AW169 has strengthened Leonardo's competitiveness and position in the world helicopter market by consolidating the company's presence in the emergency medical services sector, increasing the number of operators for law enforcement, civil protection and fire prevention. It further strengthened the company's leadership in the twin-engine VIP segment, providing operators with an additional option that ranks between the popular AW109 and the bestseller AW139. The helicopter also represents an extremely functional solution for short-range operations in support of the energy sector and has allowed Leonardo to increase its role in the field of supporting the maintenance of wind farms. The helicopter's 'dual' design has responded to a series of government, security and defense requirements, in Italy and around the world, for missions such as surveillance, troop transport, combat, rescue, firefighting, training, mountain rescue and MedEvac (medical evacuation).

Over 300 AW169s have been ordered to date, with around 150 units delivered from the final assembly line in Vergiate to operators in 25 countries. The global fleet has accumulated more than 125.000 flight hours in all types of missions and in all conditions. The helicopter that has flown the most to date has exceeded 3000 hours carrying out helicopter rescue missions in Sweden.

Leonardo announces the completion of the merger between the US subsidiary Leonardo DRS, Inc. ("...
577
Read

The 25th committee took place on 7 November at the Emmen air base, in the Swiss territory of the Canton of Lucerne...
715
Read

The launch of the Multipurpose Offshore Patrol Vessel (PPA) "...
4143
Read

It took place on Tuesday 22 November at the Rome headquarters of Rheinmetall Italia, belonging to the Rheinmetall AG Group and...
1313
Read

– The US Air National Guard (ANG) has issued an Deployment Recommendation for the active “expendable” countermeasure...
9502
Read

Today, the assembly of the AIAD, the Federation of Italian Companies for Aerospace, Defense and Security of ...
1143
Read