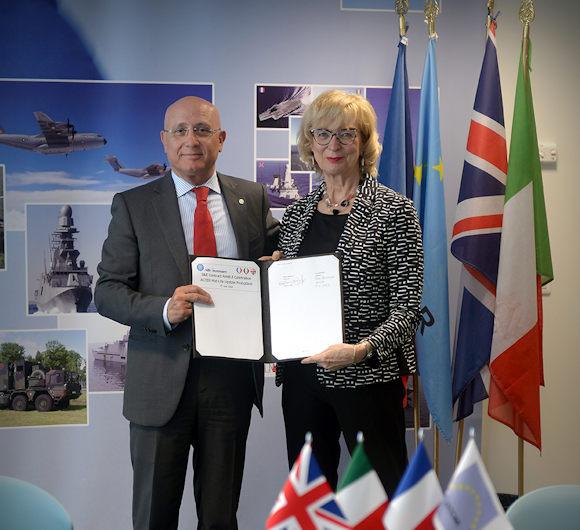 On 9 June 2021, Eurosam, the Franco-Italian consortium participated by MBDA and Thales, signed a contract with OCCAR (Organization Conjointe de Coopération en matière d'ARmement) for the production of the half-life upgrade of Italy's ASTER missiles. and the United Kingdom. The contract follows the one signed in January 2020 for the upgrade of the French ASTER missiles. All domestic customers have now commissioned the refurbishment of their ASTER missiles in service: the French, Italian and British navies, the Italian Army and the French Air Force. The contract was signed at the OCCAR headquarters in France (Paris area).

The update operations will be carried out in the next few years in the respective national maintenance centers: the MBDA headquarters in Selles Saint Denis (central France), the CIMA (Advanced Ammunition Center) in Aulla, located near the MBDA site in La Spezia in Italy , and at Defense Munitions Gosport, near Portsmouth, UK. The modernization contract was an opportunity to implement the latest environmental regulations (REACH) in the production process and waste disposal will be managed in factories that have been built according to the latest environmental standards.

This contract ensures improved efficiency of ASTER missile-based systems, thus continuing to ensure the sovereignty of customers' airspace by protecting their territory, population, as well as their operational troops and fleets.

The signing took place after the success of the three ASTER missile launches carried out during the "Formidable Shield 2021" exercise, the main NATO air defense and anti-missile defense exercise, which saw the participation of 10 marines and took place in the second half of May, at the British Ministry of Defense shooting range in the Hebrides, Scotland. During the exercise the ASTER 30s were successfully launched by French, Italian and British ships, consolidating the missile's position as the main contributor to European defense.

ASTER missiles represent the cornerstone of European air defense programs. For air defense from naval units they are operational on the most recent ships in service with three of the major European navies: the Italian, French and British. For land-based air defense the current SAMP / T configuration, with its multifunction passive antenna radar, has been successfully used in France and Italy since 2011. Thanks to its 360 ° capability, this system already provides protection of vital resources against omnidirectional threats over large areas, well over 15.000 km², with an effective altitude of more than 20.000 meters and at distances well over 50 km.

A new generation of SAMP / T systems, called SAMP / T NG, has been commissioned by France and Italy and will be delivered starting in 2025. The SAMP / T NG will guarantee protection against new and challenging threats and allow the implementation of new concepts operational. This system will include, in particular, a new 360 ° multifunction radar equipped with an electronically scanning active rotating antenna and an expanded ASTER family that includes an enhanced missile: the ASTER Block 1 NT (new technology) with a new seeker and a new computer capable of countering emerging modern threats. It will allow a radar detection range of more than 300km and an interception range of 150km.

ASTER missiles for naval and land based air defense systems are also in service with several other Armed Forces around the world.