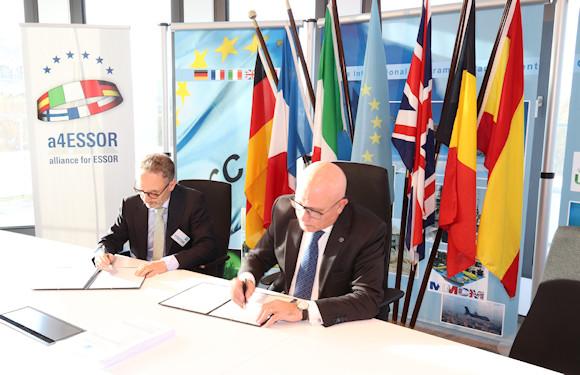 a4ESSOR SAS (Alliance for ESSOR), a multinational joint venture that is developing a secure European Software Defined Radio (SDR) technology, has signed the procurement contract with OCCAR, the European intergovernmental organization for joint armaments cooperation, for the realization of the ESSOR New Capabilities (ENC) project. The initiative was financed by the European Defense Industrial Development Program (EDIDP) under the Grant Agreement n. 044.

ESSOR New Capabilities aims to develop three new waveforms - ESSOR NBWF, ESSOR 3DWF and ESSOR SATCOM WF - which will increase the interoperability of the European Armed Forces. Furthermore, the project envisages the enhancement of the pre-existing framework, with the aim of managing the waveforms throughout their entire life cycle and guaranteeing their interoperability once they are transferred to national radio terminals.

Lino Laganà, President and General Manager of a4ESSOR, stressed that the new contract is a key element in the framework of the common European defense. He also highlighted the privilege and great responsibility of managing the new projects financed by the European Commission and the ESSOR nations - Italy, France, Spain, Poland, Germany and Finland - after the work and the positive results achieved with the first form of wave, the ESSOR Wide Band WaveForm, and within the ESSOR framework.

The ENC project is part of the ESSOR program, focused on improving the interoperability and security of tactical communications on land (ESSOR HDR WF and ESSOR NBWF), air-ground-air (ESSOR 3DWF) and satellite (ESSOR SATCOM WF). By ensuring compliance with the Software-Defined Radio platforms based on ESSOR and on the Software Communication Architecture (SCA) and by adopting a very rigorous methodology in the qualification of the interoperability between all the consortium radios that host these waveforms, ESSOR guarantees the Armed Forces an effective ability to work together.

The procurement contract follows the EDIDP Grant Agreement, which OCCAR, on behalf of the European Commission, and the ESSOR partners signed last July. The project will also see the involvement of some companies that are not part of the ESSOR nations, namely Telespazio Belgium, controlled by Telespazio (joint venture between Leonardo, 67%, and Thales, 33%) and Edisoft (Portugal).

- A data-driven approach to design and manufacturing processes. This is the new model launched by ...
518
Read

The German armaments giant has formalized the offer to Leonardo for the acquisition of 49% of the shares ...
13125
Read