Donbass still burning: the Kiev forces resume the initiative a few steps away from Donetsk 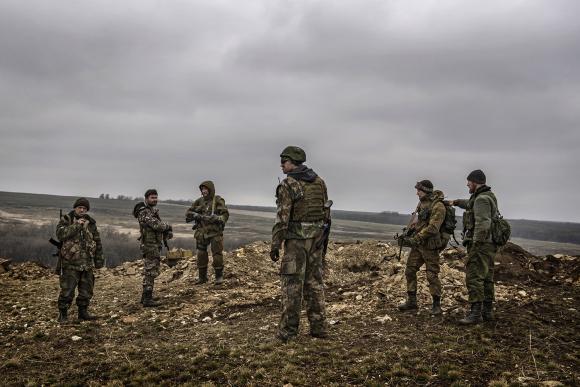 The clashes continue in the Donbass: on the one hand the Ukrainian regular forces, on the other the United Armed Forces of Novorossiya, a separatist militia cartel considered a group of terrorists by the Kiev government.

In the area of ​​Avdiivka, a city in the hands of government forces less than 20 km north of Donetsk, the artillery activity knows no rest, while movements of ground troops suggest a recrudescence of operations in the coming days.

All the territory that goes from Peski (west of Donetsk) to Gorlovka (north east) is affected by a redeployment of Ukrainian forces.

Airborne troops of the 80a Brigade and unit of the 79a Air Assault Brigade would have been dislocated as a reinforcement to the 72a Mechanized Brigade of Colonel Sokolov, now fully deployed in the Avdiivka area.

The paratroopers departments deployed in these hours are officially stationed respectively in Lviv under the West Operation Command and in Mykolaiv in southwest Ukraine. As well as the troops of the historic 72a Brigades have however been employed since 2014 in war operations against the pro-Russian forces of the Donbass and boast a great deal of experience on the ground. Together with the 79a and at the 80a Brigade (which currently also has T-80 tanks), other airborne units are also operational throughout the Donbass area: the 25a Brigade (forced to leave Crimea in the 2014) and the 81a Brigade constituted precisely in the 2014 with elements coming from 25a.

The concentration of Ukrainian troops would serve to prevent the penetration of pro-Russian forces west of road 20, along the coal basin that runs alongside Avdiivka on the left side. The eventuality could result in the isolation of entire Ukrainian wards, with the specter of setbacks suffered in 2015.

Beyond the military situation on the ground, the conditions of the civilian population worsen and the flight from areas on the front line begins again. The distribution of light and gas in many urban areas has been interrupted. At the same time, the tone rises between Kiev and Moscow, which mutually accuse each other about the responsibilities of the new escalation.

According to the Kremlin, the Kiev government is forcing its hand to avoid a possible isolation as a result of the election of President Trump. An eventual agreement between Russia and the United States in Eastern Europe would deprive the current Ukrainian leadership of its main political, economic and military sponsor. The clashes would have resumed on the initiative of the Ukrainian paramilitaries supported by the artillery of the regular forces. The bombings in the last 48 hours would have involved Donetsk suburbs, plunging the Ukrainian city back into the horror of war.

Vice versa Kiev accuses Russia of betting on the new American course to continue to arm the separatist rebels of the Donbass and thus have a free hand in eastern Ukraine.

Diplomacy is at work to avoid the reignite of the conflict that in anticipation of the end of winter, could re-explode on a large scale.

The next few hours will be crucial to understand not so much the possible military evolutions as the possible new geopolitical balances.

On the subject see the online defense reports on Donbass.

Agreement reached between USA, Russia and Jordan. The rebels tied to the sign of the Free Syrian Army abandon the ...
13367
Read

The news bounces on all media, even those absent in these years of Syrian counter-attack against terrorists ...
19183
Read

The latest dispatches speak of a counter-offensive ISIS in Hama's bag, where the militiamen of the Caliphate are now ...
19664
Read

The Israeli government follows with great apprehension the evolution of the war in Syria. The growing role of Iran, ...
6226
Read

Thirty years ago it would have been unthinkable, but in the Near East everything is possible. As we write, the army ...
8121
Read

In the hot hall of the Syrian desert, in the southeastern part of the country, countdown began. The militias ...
22875
Read

In Syria, the latest news from the front focuses on Deir Ezzor's director. Syrian troops ...
10263
Read

"Mum them Turkish!". This time to shout out are the Saudis, promoters of the regional crisis with Qatar but now ...
9729
Read

The black continent becomes more and more yellow. If the penetration of the Asian giant in Africa was limited to ...
13259
Read

Israel, after a few years of deafness, returns to play a more visible role in the Middle East. The evolutions of the ...
5061
Read