Home geopolitics Venturi Times Ankara on the offensive in the north of the S ... 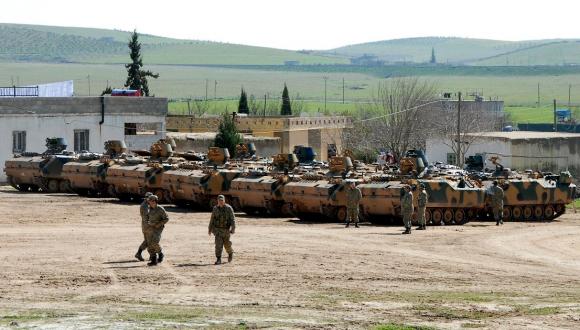 The first real massive attack began on the night of Monday, July 3. Turkish artillery began hammering with T-155 howitzers and T-122 rocket launchers Sakarya the positions of the Kurds of the YPG in the district of Afrin, in the north of Syria.

We are only a handful of kilometers from the Turkish border, crossed by conspicuous armored forces of Ankara for two weeks. We talk about tens and dozens of tanks and armored vehicles belonging to the 7 ° Army Corps.

- move away from the border the Kurdish forces of the YPG for a distance not less than the 30 km;

- create a corridor between the buffer in the northeast of Syria in the hands of the pro-Turkish rebels and the governorate of Idlib (northwest) where the Turkish supremacy is being challenged by the new jihadist cartel Hay'at Tahrir Al-Sham, heir of Al Nusra (Al Qaeda), but unwilling to take orders from Ankara.

According to the Turkish newspaper Daily (Sabah, the offensive will be similar to Shield of the Euphrates ended last March and will head to the same city of Afrin, capital of the border district.

The bulk of the contingent involved will be rebels, although some groups such as i Descendants of the Saladin, seem reluctant to attack the Kurds. Air support, artillery and armored troops will still be supplied by the regular Turkish army.

The militias YPG I am the armed arm of the Party of the Democratic Union, considered by the Ankara authorities affiliated to PKK and therefore as a separatist terrorist group.

Turkish intervention, however, is not limited to the actors involved, but takes on regional significance.

Halfway between the city of Azaz (controlled by pro-Turks on the road between the border and Aleppo) and Afrin (in the hands of the Kurds), is the Russian base of Kafr Jana. Last March, Moscow had agreed with Turkey a common presence in northern Syria. As incongruent as it may seem with the complex scheme of alliances in the Syrian crisis, the Russian presence represents a geopolitical fact of great importance. Basically, in the context of the de-escalation zones, Moscow is not opposed to the strengthening of the Turks near the Syrian border, focusing rather on the frictions that this may entail within NATO. 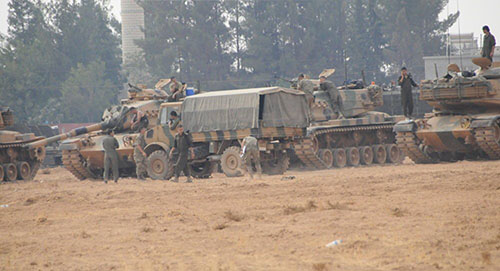 The data sends furies over the high Kurdish commands that are believed (statements of the 5 July of the "general" Kurdish Sipan Hemo) victim of a conspiracy ordered by Turkey, Russia and Syria.

About relations between Ankara and Washington, relations remain in balance on the brink of a collapse (see article). The United States is firmly opposed to a Turkish intervention against the Kurds, to the point of starting to patrol the border post of Tall Abyad with its own military, on the east side of the Turkish-Syrian border. Also the influx of American weapons for the SDF continues to arrive on time: in these hours, dozens of Humvees armed with anti-missile missiles and machine guns were delivered to Qamishli.

The possibility that Ankara could implement a true invasion of North Syria has been suspended since August of 2016 when it was with the operation Shield of the Euphrates, behind the official purpose of attacking ISIS, Turkey was already aiming to contain the Kurds in the northeast regions (east of the Euphrates).

All the media attention has been captured by Euphrates Wrath, the operation of the Syrian Democratic Forces, Kurdish majority militias supported by the US, aimed at releasing Raqqa from the Islamic State. In reality, penetration beyond Raqqa (Arab city, not Kurdish, ed) does not fall within the strategic interests of the Kurds except to the extent that the operation increases the credit to be collected with the West at the end of the war. When diplomacy will finally take the place of arms in Syria, the price for the service provided by the Kurds will not be less than federal autonomy. At least according to the internal calculations of the Rojava. 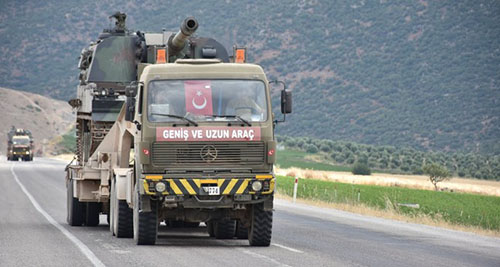 A large-scale clash between Turk and Kurdish north would in any case distract the Kurdish forces from continuing the operation against ISIS in the south. In this context, the primary interest of the US-led anti-ISIS coalition would be compromised, namely to prevent the Iraqi and Syria boundaries coming to Assad's hands.

In other words, an open war between Turkey and Kurdish militiamen would clash with the American project of a long-term permanence in eastern Syria.

Currently the portion of Syria east of the Euphrates between Iraq and Turkey (except for the territory still in the hands of ISIS) is in the hands of the Kurds supported by the Americans. There are already seven US bases standing in the Arab country, including Tabqa Airport, west of Raqqa (and the Euphrates ...). The Syrians push west to get to the river and break the siege of Deir Ezzor. On this dial will be the military game of the coming months, with ISIS now in liquidation.

The future US presence in Syria, on the other hand, will depend on relations with the Kurds and on the ever thinner thread that binds Ankara to Washington.

Turkey in Syria and USA flop