Syrian Diary. Cap.3: At the front with the "Falcons of the Desert" 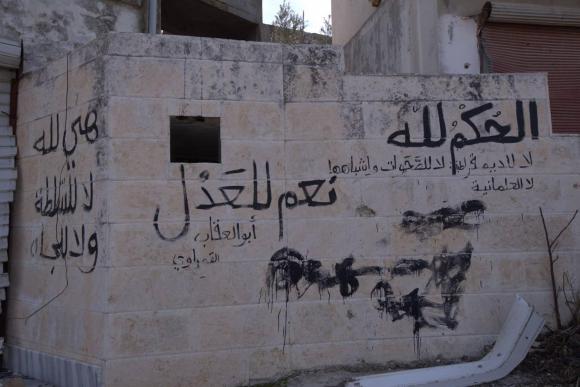 From a small town along the coast we head north. Near Latakia we meet for the first time a column of Russian trucks followed by a BMP traveling on a tablet. The Syrians accompanying us are keen to point out that their help has been overrated in the West. They cleared the sky but did little on the ground. A few minutes and from the side facing the sea, Russian anti-aircraft and anti-ship batteries emerge. A backdrop of light and wind accompanies us.

We exit the freeway traffic and enter into a stretch of traffic on a lane. The concrete part partially protects against the shots from the north. After a quick stretch we reach the first checkpoints of the Falcons of the desert. They are an elite force of volunteers Defense committees. They are the perfect synthesis of this war: well-trained, tenacious, famous for determination, are citizens who have chosen to free Syria from terrorists, indeed, from "rats" as they call invaders and traitors. They have a twin body, i Hawks of the sea, involved in coastal defense. These men, unknown to us, in Syria are legend.

They were waiting for us. Smiling faces of all ages do not look like extraordinary fighters who only two days ago have rejected another attempt to re-occupy Salma, the mountain town where we are heading.

Salt the road and salt the cold. The route is bargained by motorbikes that carry the shuttle to carry food, ammunition and even wounded. At a checkpoint some soldiers barely stand on the crutches: they are the wounded who chose to remain at the front with their brothers of war and blood. It's moving. 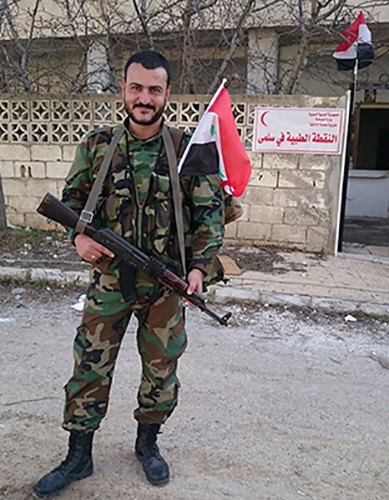 By climbing the altitude the cold increases but remains bearable. Nothing to do with the January half-meter of snow when fighting here often with a hard egg a day to feed.

Perched on top, Salma is virtually destroyed. There is no building that has not been damaged. As soon as we get there comes a message on cell phones: "Welcome to Turkey". The border is actually at 15 kilometers. Telephony sometimes goes beyond geopolitics. Or vice versa, who knows ...

The city was taken despite the contrary Russian opinion. The attempt seemed crazy. Thousands of terrorists had been assassinated by Syrian counterparts (for money or for coercion).

The terrorists are mostly ethnic Turkmen Al Nusra militiamen who come and go from Turkey. Ankara's support is brazen. Until a few days ago there was a direct channel of supplies and Turkish ambulances commuting. But aid is not just about logistics. An officer (in woodland camouflage without grades) tells us that the Turkish artillery fired on Syrian positions for days. A practice that still continues.

Just the protection of the Ottoman artillery ended up betraying the defenders. Relaxed in the city, they saw themselves plunging into them falcons Syrians who under heavy grenades have been assaulted with a bloody home-based crash.

In the escape the "rats" have left some cars filled with explosives that mutilated and killed eight men. The blasters worked days to defuse all the scattered traps around. In the same days the terrorists have tried several times to regain positions but have always been "beaten".

We turn between rubble, camouflage, broken walls with written in Arabic and a cold too beautiful for the horror that envelops.

The mere fact of being told by Westerners fills the eyes of the men we meet with a sincere happiness. It is a small emotion, in a tremendous tragedy. 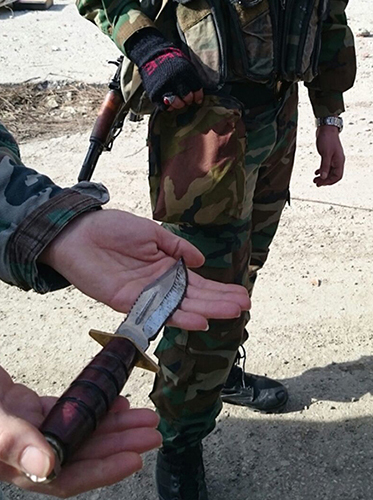 One of them shows a Turkish manufacturing knife subtracted from a murdered terrorist (photo). Another shows one with the word "USA" and gestures makes sense of the dynamics with it has become its own: it has machine gunned down the enemy, has ripped against it, pulled it out of the sheath and ended it.

As we climbed up the mountain, the artillery bucks made the earth tremble. Now that we are in the city are stronger and at times they intensify cadence. Fortunately for us, they are shots on the go.

We ask another soldier if he wants to tell something about the assault. He sighs and begins to talk.

"I was with a team that went up through a forest under the city when suddenly a thick fog fell. A few steps and we hear a great number of terrorists coming. I thought we would all be dead when one of us suddenly shouts: The terrorists, now a few meters away, without stopping, replied confidently: Go ahead, we'll take care of those ... We continued for a while and then we fell behind them: we killed 35. Only at the end, with shaking hands, did I realize how much fear I had lived through those moments ”.

The stories follow. Someone we ask to explain who they are falcons draws a parallel with Italy, and describes them as a kind of marines. The news of the heroic tenacity of the two Italians has come here too ...

Meanwhile the artillery hits around us intensify. It sounds strange to say, but after shaking hands with men like these we leave the area with regret. A hint of regret that remains in the wind.

(photo opening Online Defense: written on the walls of Salma by terrorists "Yes to the law of God and yes to his justice." "No to Democracy").