Syrian diary. Cap.2: Damascus is reborn, on the edge of the war 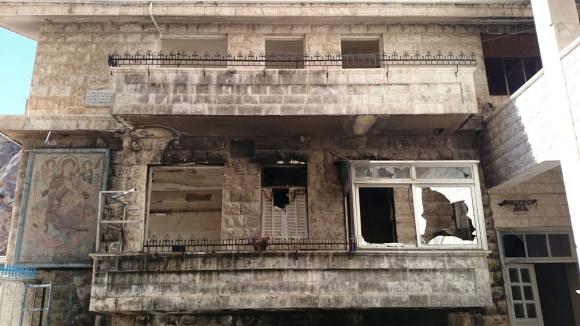 Damascus is a city at a minimum. Getting there is a strange effect, especially if it is not the first time: little traffic and too many lights turned off at night. For those who live there or have already been there for the last four years, it's different. In reality, the city is flourishing. The people are starting to return to the restaurants, the streets are filled, some flowers come out from the rubble and splinters of the wall.

Until recently, military Kalashnikovs were the rule at military checkpoints. Everywhere the ostentation of weapons became cumbersome, obsessive. Renouncing herself, Damascus smelled of lead and heavy dust.

Today, even without lowering our guard, the general impression is a great desire for normality. Safety passes from the barrels of lowered guns, from a few more smiles, from a greater availability of soldiers and security men. If it is a policy or a behavior linked to the good news coming from the front, it is not known. The men sitting in the less hurried cafes of yesterday demonstrate it: Damascus launches signs of a return to life, slow but progressive.

From the attack of the Sayyida Zeinab mosque three days ago to the echo of the detonations we have got used to it. In the background of each day there are roars and the return of explosions in the distance. Whether they are bombs, rocket grenades or cannonades is unclear. It is an endless litany, heavy and discreet at the same time. The war is there but you can't see it. It carries its load of anguish with discretion, intertwined with that normality that is desperately needed.

Yet despite the horrors Damascus retains all its charm: between the architectural lace of the old city and the colors of the spice stalls, in the ancient and narrow streets of the center you almost forget that a few kilometers from here there is still hell. A hell that has lasted for too many years and that these people do not deserve.

Tomorrow we will approach the places where we shoot, where we fight, where we win or die.