Ukraine: Has the Russian convoy north of Kiev dispersed? Is the siege of the capital imminent? Here's where it ended up 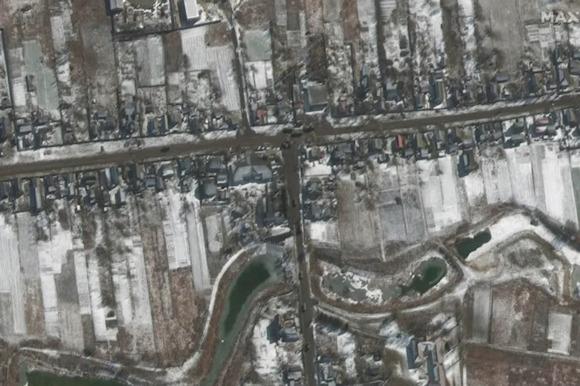 Remember the headlines and politicians' comments about Kiev's next fall in the aftermath of the Russian aggression on February 24? Remember, too, the infamous 60-70km convoy of armored vehicles and vehicles north of Kiev that the newspapers had given wide coverage, pointing to as proof that the siege and siege of the Ukrainian capital was a done deal? Well, according to satellite images from the Maxar company, the vehicles are no longer in line and have dispersed, looking for safer positions, around and inside the villages near the Antonov airport, 25-30 km from Kiev. Above all, there are no signs of further inflows from the Belarusian border. As Ukrainian sources said last week, the wide gorge that passes by Irpin, Bucha and Hostomel itself makes the task easier for the defenders and transforms military vehicles in transit into "shipments of fresh meat".

In the past few days, two Russian convoys headed for the Ukrainian capital have also been killed, to which the drones and other anti-tank systems supplied to the Ukrainians have given no escape. This happened in the parts of Brovary - a suburb of Kiev where Russian vehicles had been brought apparently "undisturbed" - and of Mokrets, closer to the Chernihiv oblast, where the troops sent by Putin for two weeks have not been able to get the best of local resistance.

In the absence of a huge number of means that lock the Ukrainian capital in a vice, the siege and capitulation of Kiev will be just a fantasy of inexperienced commentators more than a reality. Russia in the short and medium-short term does not have those means over there. Could those vehicles be the columns of Belarusian vehicles seen in recent days moving from the north of White Russia and from the parts of Brest? Possible, but under three conditions:

So, will the "battle of Kiev" not take place? It is too early to tell. Certainly, those who will have to fight it still have not managed to get out of the mud and shelter from the hit-and-run attacks of the Ukrainian resistance. In short, to think that all of 60-70 km of vehicles are still intact, with high morale and ready to fight is hard to believe.

To understand the situation on the ground, we confirm that our personal contacts on site have easily moved several times to and from Kiev and have finally gone West with their hearts in their throats but without particular difficulties. Among other things, for days there have been no more news of "assaults" by Russian special forces on the capital, given the increased security of the city.

Lithuania has begun to ban the rail transit of goods subject to EU sanctions to the ...
11683
Read

The war in Ukraine - now close to the end of four months - has introduced us to some places whose ...
6256
Read

There are few doubts: the first ... unfortunate meeting between the Russian Fleet in the Black Sea and a couple of ...
8832
Read

The Russo-Ukrainian War threatens the survival of hundreds of millions of individuals around the world as claimed ...
30955
Read