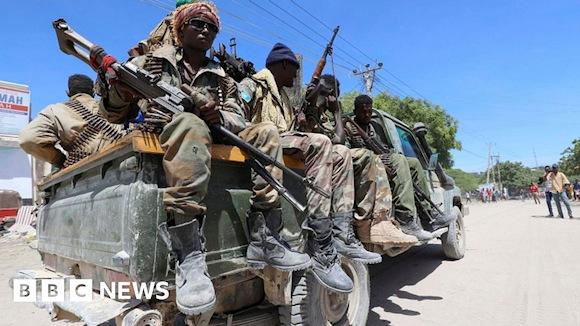 The wave of terrorist acts in Somalia does not stop. Even today, the Somali police announced that three people were killed and five injured in an attack. The explosion occurred in the Dayniile district of western Mogadishu.

The bomb placed on the side of a road, apparently had as its objective a vehicle of the deputy mayor of the Somali capital, Ali Yare, but those who were hit were mostly students returning home from school.

No group has yet claimed responsibility for the explosion but the first suspects remain the al-Shabaab group, linked to al-Qaeda.

On Saturday, however, two explosions devastated Mogadishu1 causing around 120 deaths and 300 injuries; according to President Hassan Sheikh Mohamud, the number is set to increase. The attack was claimed by Islamists from Al-Shabaab.

Within a few minutes there were two explosions caused by as many car bombs in the center of the Somali capital.

A vehicle loaded with explosives was detonated in the vicinity of the ministry of education. A few minutes later another explosion occurred in the same area in front of a busy restaurant. The explosions were followed by gunshots against the ministry.

The attacks took place near the busy Zobe intersection. In the same place, at the K5 intersection, which is lined with government offices, restaurants and kiosks, a truck full of explosives exploded on October 14, 2017, killing 512 people and injuring more than 290. The country's deadliest attack ever. by Al-Shabab.

On Sunday, October 23, there was another attack, this time on a hotel in the center of the port city of Kismayo in southern Somalia. The assault began in the late morning when an explosive car first rammed the entrance to the Tawakal Hotel and then, the armed commando, opened fire, killing nine civilians and wounding 47 others. Security officers killed three of the attackers and a quarter died in the bomb explosion.

In August, the jihadist group launched a 30-hour attack with firearms and bombs on the Hayat hotel in Mogadishu, killing 21 people and wounding 117.

Somali President Hassan Sheikh Mohamud, elected in May, pledged after the August siege to lead a "total war" against the group. The fighters responded by killing prominent clan leaders in an apparent attempt to dissuade support for that government offensive.

Just Saturday a meeting was taking place in Mogadishu between the president, the prime minister and other senior officials in which the security of the capital was discussed.

Somalia's international allies including the United Nations, Turkey and the African Union force tasked with helping Somali forces take responsibility for security by the end of 2024 have condemned the attacks. The AU ATMIS mission, on Twitter, stated that "These attacks underline the urgency and critical importance of the ongoing military offensive to further degrade Al-Shabaab".

Turkey, in a note from the foreign minister said: "We are deeply saddened to learn that many people lost their lives and were injured in the terrorist attacks that took place today (29 October) in Mogadishu, Somalia. We condemn these atrocious terrorist attacks in the strongest possible terms."

The United States deployed its ground troops in small numbers to Somalia in May 2022. At the end of 2020, US interim secretary of defense Miller presented Trump's plan to withdraw US troops from overseas missions. In addition to the total withdrawal of soldiers from Afghanistan and Iraq, the project also included the withdrawal of American troops from Somalia. A few months later most of the troops were redeployed to other territories such as Djibouti and Kenya, where the US has air bases from which it launches missions against Al-Shabaab.

US personnel trained and supported Somali forces, including its special forces, in counter-terrorism operations.

There have been several American attacks on jihadist targets in recent months. The latest was on 23 October when AFRICOM conducted an air raid in defense of the army near Buulobarde, in coordination with the Somali government, against Al-Shabaab. Two terrorists were killed and no civilians involved.

Earlier this summer, President Joe Biden was urged by the Secretary of Defense, L.Austin, to maintain a fixed contingent in Somalia for "To allow a more effective campaign against al-Shabaab, which has strengthened and constitutes a greater danger".

Let us not forget that in neighboring Ethiopia the Tigray conflict (see Ethiopia, the conflict and the forgotten humanitarian catastrophe) risks having consequences far beyond its borders as the Ethiopian army is also engaged in the fight against Al-Shabaab in Somalia.

Somalia remains fundamental for the security context in East Africa and strategically important also for Italy given its geographical position.