Syria: the Russians reclaim Palmyra and resumes the government offensive on Deir Ezzor 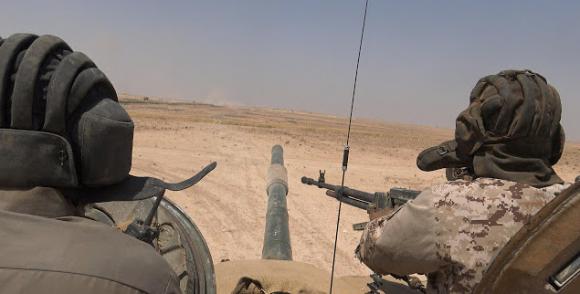 The reconquest of Palmyra by the Syrian army is producing effects throughout the southern sector of the Arab country.

A detachment of Russian specialists from the International Antimine Center reached the Hmeymim airbase, in the Latakia region, to then be transferred to Palmyra where it would strengthen existing personnel. More than 150 are the Russian military specialized in the neutralization of mines currently operating in Syria.

The safety of the Palmira area, including the gas fields, the power plant and numerous villages in the mountainous areas near the archaeological site, is the result of a further advance towards the east of the Syrian forces.

The operations must be considered within the general offensive on Deir Ezzor, a city besieged by the ISIS distant about 150 km from the Syrian avant-gardes arriving from Palmyra.

From around 24 hours the bombardment of the Russian air forces that attack the concentration camps and infrastructures of the Caliphate scattered in the desert areas surrounding the important center on the Euphrates is incessant.

Government reinforcements from Homs continue to flow into the area. At the 5a Legion (unit mentioned several times, trained directly by Moscow and formed by volunteers only), the departments of 18 are addeda Competent Armored Division by Sector, National Defense Forces, several Hezbollah units and Iraqi Shiite paramilitaries.

The desert area around Deir Ezzor could be the next collection point for thousands of ISIS militiamen fleeing northern Iraq. The city assumes a great strategic value also in virtue of the fact that if the Syrian army were to break the siege after three years, the forces of the US-led coalition would be forced to accelerate the offensive on Raqqa at that point also reachable from the south .

The war in Ukraine has multiple side effects, including the run-up of the countries most dependent on ...
1755
Read

At the height of three days of tensions, the Latvian parliament approved a bill allowing the ...
48539
Read

On 7 May, NATO Secretary General Jens Stoltenberg of Norway during an interview with the newspaper ...
3111
Read

“The Russians don't have the ability to enter the Azovstal tunnels ... That's not just a normal tunnel, that's a ...
9785
Read

The escalation of tensions between Russia and Israel continues. The statement on ...
7287
Read

This tweet you see is not the reaction of a keyboard lion, nor the post of a bored retiree passing the ...
3205
Read

Yesterday, on the sidelines of the visit of the speaker of the American lower house, Nancy Pelosi, Jim McGovern, a ...
5526
Read

"A major escalation is avoidable", so tweeted a few days ago Tor Wennesland, special coordinator of ...
882
Read

This would be an unbelievable story, if the protagonist on the Russian site hadn't told it, complete with video ...
7451
Read