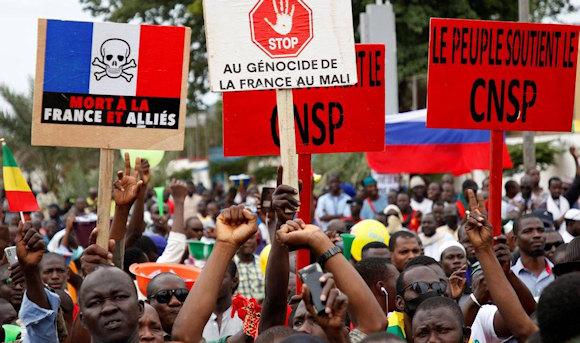 For several days in Chad (one of the poorest countries in the world) demonstrations against the French presence in the country have raged. Already last autumn the population took to the streets to prevent the re-election of the "president" Mahamat Idriss-Déby.

The demonstrators took to the streets to protest against the interference of France and to demand the abandonment of the country by the former colonizer. They also say no to the installation of French military bases on their territory. French flags burned and several “Total” fuel stations looted, induced the Chadian riot forces to use tear gas and water cannons to disperse the rioters and several arrests were made.

Max Y. Loalngar, spokesperson for the movement Wikit Tama was arrested after the march on May 14, 2022, which turned into a violent demonstration in several cities of Chad against French politics. He is accused by the Ministry of Public Security of vandalism.

In the Sahel there is a resurgence of anti-French sentiment stronger than usual.

In late February, Mahamat Idriss-Déby, who leads the Chadian Transitional Military Council, announced his intention to strengthen the United Nations Multi-Dimensional Integrated Stabilization Mission in Mali (MINUSMA) by adding 1.000 of his troops to the 1.400 already deployed. One of the problems that he will have to face, however, is the equipment material.

After this announcement, the military adviser of the UN peacekeeping department, Birame Diop, wanted to assess the needs of the Chadian army which would need at least a hundred armored vehicles and observation drones. It seems that the French have not accepted these requests which has led General Diop to negotiate with the Turks who are already supplying materials to Chad. 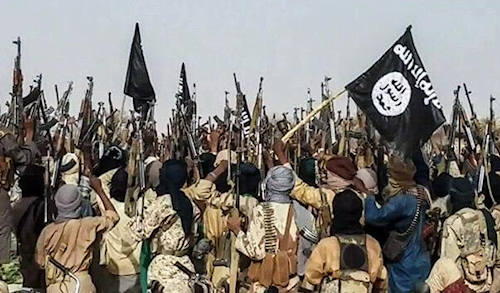 Terrorism spreads in the Gulf of Guinea

Terrorism does not seem to stop but is spreading more and more in Togo, Mali, Niger and Burkina Faso. In the night between 10 and 11 May an attack perpetrated by a terrorist group in northern Togo on the border with Burkina Faso killed 8 soldiers and 13 were injured. There have never been any attacks of this magnitude in the country. Military sources reported that the attack was perpetrated by about sixty armed men and that the fighting lasted more than two hours and a group of soldiers called to help was the victim of an ambush. The European Union High Representative for Foreign Affairs and Security Policy, J. Borrell, also said the attack in Togo shows that the terrorist threat is spreading to the Gulf of Guinea countries.

It seems that some jihadist groups are establishing bases in Burkina Faso and Mali to expand in Benin, Ivory Coast and, to a lesser extent, in Togo, Ghana, Senegal and Guinea.

Several armed groups are very active in Burkina Faso, Niger and Mali. In particular, the Katiba Macina (also known as Front de libération du Macina, founded in 2015 by Amadou Koufa), linked to Al-Qaeda, is trying to strengthen its presence both in the south-east of Burkina Faso and in the south-west of Niger, also spreading to Benin and in Togo.

In Mali the Katiba Macina (pronounced "Katiba Massina", ed.) is wanted by the local armed forces supported by the Russian group "Wagner" and has claimed to have taken some members of the latter hostage.

Second Human Rights Watch the Malian Armed Forces and associated foreign soldiers reportedly summarily executed some 300 civilian men, some of them suspected Islamist fighters, in the city of Moura, central Mali, at the end of March 2022. The men were among those detained during a military operation that had begun on March 27. It seems that forces of the Malian army and foreign soldiers, identified by various sources as Russians, executed in small groups several hundred people who had been arrested in Moura. However, from Bamako, they deny the presence of other foreign forces (see Russians) on Malian territory. 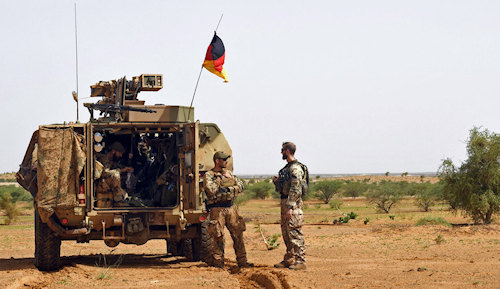 Germany expands its presence in the Sahel

In Germany, the government is currently deciding to expand military operations in the Sahel by increasing the number of its men in the various UN and EU missions present in the area. The motion will be voted on next week. About 300 men are expected to reinforce the MINUSMA contingent by taking over from the French troops who are expected to leave Mali in the coming months to move to neighboring countries. These are medical services, support forces for the continuation of operations at Gao Airport, as well as an additional security and support company for the operations of the ground reconnaissance forces. The German reinforcements will not only be in the MINUSMA contingent but also in the EUCAP Sahel Mali and EUCAP Sahel Niger missions. The reinforcements that Germany will deploy would, according to the government's proposal, improve the operational capabilities of the security forces of Burkina Faso, Mali, Mauritania and Niger and of the joint task force of the G5 Sahel countries (Burkina Faso, Chad, Mali, Mauritania and Niger).

Officially, the German move is aimed at containing the massacres perpetrated by the coup government of Mali in alliance with Russian forces but it should not be forgotten that Mali is geostrategically important and rich in resources (oil, uranium, gold).

German Foreign Minister Annalena Baerbock said that "we are not just focusing on what is happening on our doorstep" ma "We continue to take our responsibilities in the world seriously". Return of German imperialism on the world stage and in particular in Africa?

Libya makes people talk about itself again; she is an actress who cannot miss on the Mediterranean scene where, instead, politics ...
104
Read

Vilnius calls, Minsk answers. Thus, we can summarize the (nth) frantic hours in the relations between the little but ...
11213
Read

Lithuania has begun to ban the rail transit of goods subject to EU sanctions to the ...
12397
Read

The war in Ukraine - now close to the end of four months - has introduced us to some places whose ...
6937
Read

There are few doubts: the first ... unfortunate meeting between the Russian Fleet in the Black Sea and a couple of ...
9244
Read

Poland, after supplying Soviet arms and weapons systems worth $ 7 billion to Ukraine ...
8615
Read

The Russo-Ukrainian War threatens the survival of hundreds of millions of individuals around the world as claimed ...
31447
Read

President Joe Biden has signed the measure, approved by the Senate, which authorizes and facilitates the provision of a ...
14552
Read

A battalion-level tactical group (BTG) would have been annihilated by (yet another) Ukrainian ambush on the river ...
18536
Read