The Italian Embassy in Kiev is operational again 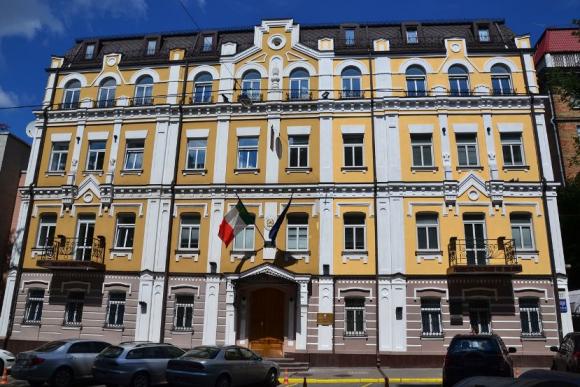 Our embassy in Kiev will be fully operational again, one of the first to return to the Ukrainian capital. Ambassador Pier Francesco Zazo and his staff returned to Kiev from Lviv protected by the men of the escort formed by soldiers of the 7th Carabinieri Regiment "Trentino Alto-Adige" leading department that operates, as well as the others of the 2nda mobile police brigade, in high-risk areas. We remind you that the escort, protection and surveillance in all Italian diplomatic offices abroad is the exclusive task of the Arma.

The diplomat said that “The reopening of our Embassy in Kiev represents an exciting and hopeful moment more than fifty days after the beginning of the conflict. […] The reopening of our headquarters is a symbolic gesture but which these Authorities greatly appreciate. Today we feel even closer to the Ukrainian government and people and we will continue to assist our compatriots in the best possible way ".

The embassy offices are essential for citizens and entrepreneurs with interests in Ukraine and are responsible for assisting Italian companies that have activities in that territory, sharing useful information. From the beginning of the hostilities, the services have evidently been limited and focused on assisting fellow countrymen and issuing emergency travel documents, suspending other services such as issuing passports, legalizations and visa applications.

The Minister of Foreign Affairs and International Cooperation wrote on social media that the embassy “Will be fully operational from Monday. It is the symbol of an Italy that wastes no time, never stops believing in diplomacy and persistently seeks peace " while in an interview with Rai Radio 1 he stated that "The channel with Moscow should not be closed. The expulsion of the members of the European delegation from Moscow is the response to the expulsions by the EU a few weeks ago. We expect the same action from Moscow that responds to our expulsion of 30 Russians with diplomatic passport. We will see in what terms it will affect our diplomatic personnel. But we keep the channel open with Moscow and we also keep open a red line for the evacuations of civilians. We must not stop believing in diplomacy ".

Ambassador Zazo's task will certainly be challenging and important.

Stay close to the Ukrainian authorities and collect information and useful elements for the reconstruction of the facts for "Pursue the path of justice". Visits will begin in the next few days in the areas adjacent to the capital where the ferocity of the fighting has caused violence, death and destruction but the Minister has specified that at the moment "Italy does not have the elements to verify whether a genocide is taking place in Ukraine". This last term is provoking in recent days conflicting reactions on the part of the various world leaders, in particular the greatest exponents of the United States, Ukraine, Russia, France and Israel.

Another objective of diplomacy in the difficult Ukrainian theater is that, according to the head of the Farnesina, “To restart the dialogue process between Ukraine and Russia. Zelensky made some important openings, now Putin must speak " in order to create humanitarian corridors to evacuate the population from eastern Ukraine where the fighting is increasingly intense. Getting to a momentary truce on the occasion of the upcoming Orthodox Easter (April 24) appears to be a difficult challenge but it could be theincipits to establish a solid foundation for "Arrive at a peace conference".

The war in Ukraine has multiple side effects, including the run-up of the countries most dependent on ...
2638
Read

At the height of three days of tensions, the Latvian parliament approved a bill allowing the ...
84412
Read

On 7 May, NATO Secretary General Jens Stoltenberg of Norway during an interview with the newspaper ...
3502
Read

“The Russians don't have the ability to enter the Azovstal tunnels ... That's not just a normal tunnel, that's a ...
11389
Read

The escalation of tensions between Russia and Israel continues. The statement on ...
7902
Read

This tweet you see is not the reaction of a keyboard lion, nor the post of a bored retiree passing the ...
3441
Read

Yesterday, on the sidelines of the visit of the speaker of the American lower house, Nancy Pelosi, Jim McGovern, a ...
5976
Read

"A major escalation is avoidable", so tweeted a few days ago Tor Wennesland, special coordinator of ...
962
Read

This would be an unbelievable story, if the protagonist on the Russian site hadn't told it, complete with video ...
7828
Read