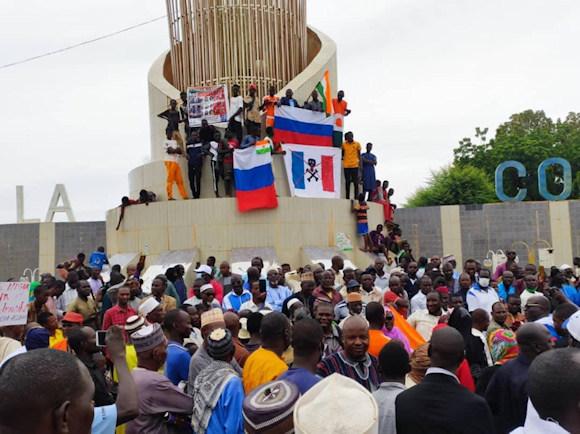 Sunday 18 September the Movement M62 which brings together about twenty structures of civil society and trade unions organized a march in Niamey followed by a meeting in front of the National Assembly (the single-chamber parliament of Niger). The objectives of the demonstration were to protest against the high cost of living, the increase in the price of diesel, the presence of force Barkhane and express their support and solidarity with the Malian people in the defense of their sovereignty and their referral to the Security Council against France for supporting terrorism. Even in the streets of Niamey, in the protests against the French anti-jihadist force "Barkhane" Russian flags were seen shouting "Barkhane out", "Long live Putin and Russia".

Resentment against France and the "Barkhane" mission has developed in recent years due to the numerous jihadist massacres in the Sahel which have created a sense of insecurity in the population, helping to delegitimize state authorities and shifting popular consensus in favor of the authorities coup d'état.

In this context, the contractors of the Wagner group they easily managed to fit in and garner the favor of citizens.

After the expulsion from Mali, the French soldiers of the "Barkhane" mission (about 3000) were deployed in the Sahel region, in particular in Niger which, in April, had voted and authorized a deployment of international anti-jihadist forces on its territory.

The coordinator of theM62 Abdoulaye Seydou, in his speech, said:"theThe Sahel is facing a terrorist war invented by France with the Libyan leadership and the arming of terrorist groups that have attacked Mali and extended their terrorist actions to the neighboring countries of Mali, Niger and Burkina Faso, with the complicity of local governments, thus opening up to France the possibility of setting up military bases with the unrecognized plan of selling off our resources and alienating the sovereignty of our states. In Niger, Issoufou Mahamadou's planned liquidation of the Nigerian army for the benefit of French forces and war affairs agents has led to worsening of insecurity resulting in thousands of civilian and military deaths and the destruction of means of subsistence of populations due to an inadequate state "

Mali, in the eyes of the Nigerians, has become a model to follow and imitate after having obtained the departure of the French military from its territory. Gamatié Mahamadou, a civil society actor said “Since they kicked France out of Mali, the Malians have internal peace of mind. They have internal peace and they have peace on the territory. "

The French forces, according to the jurist Boubacar Amadou Hassane, would now be forced to succeed in the fight against terrorism: “If the French fail to achieve plausible results, it means that civil society will continue to contest their presence and demand their departure. So, in a certain sense, in Nigerian territory, the forces of the Barkhane mission are subject to an obligation of result ".

The climate that reigns in Niger and in neighboring countries is very heavy, the population is disoriented and exhausted by famines and by the rage of jihadism which in recent months has carried out several terrorist attacks in which many civilians have lost their lives, different local military and the UN mission in Mali (MINUSMA).

On 19 June, the explosion of an IED in Kindal involved a UN convoy where a soldier from the mission was killed. On July 6th two peacekeepers United Nations were killed and five were seriously injured by a bomb that hit the vehicle in which they were traveling on the Tessalit-Gao road. On August 16, in Ber, another MINUSMA soldier lost his life following a kamikaze attack on the base of the mission by an Islamist militiaman. These are some of the latest attacks on the contingent in Mali which has now also lost the reinforcement of the "Bahrkane" mission.

Will the same fate befall Niger? 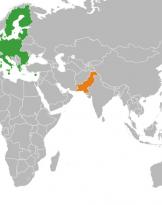 A high-ranking Pakistani diplomat allegedly was involved in a scam involving the granting of visas for ...
1334
Read 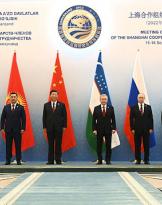 The twenty-second edition of the summit of the Council of ...
1830
Read

This morning the report, a bit slow and boring, of the war in Ukraine in the last two weeks has suffered a ...
12309
Read

A few hours after our article on the "game changer" induced also and above all by the HIMARS weapon systems in the war ...
24075
Read

Friday 8 July a few kilometers from the site of the massacre of almost two entire battalions about two months ago (...
18215
Read

Libya makes people talk about itself again; she is an actress who cannot miss on the Mediterranean scene where, instead, politics ...
2566
Read