Home geopolitics Foreign Shorts The gas wars: from Asia to Europe from ... 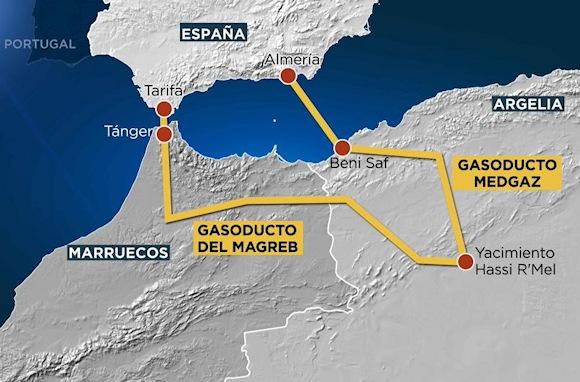 The war in Ukraine has multiple side effects, including the run-up of countries most dependent on Russian energy resources, to seek alternative sources of supply or to implement some of the existing ones.

The Italian government, in recent weeks, has given a mandate to some of its exponents to renew or sign new contracts with international partners to remove the specter of a profound energy crisis, in part already underway.

In conflict in Eastern Europe, it is grafted onto the now eternal challenge being fought in North-West Africa which sees Algeria, Morocco, Western Sahara, Mauritania and Spain as actors directly involved.

Clashes, retaliations and suspicions are not only concentrated on the border near Guerguerat but also in the diplomatic and political relations between the states involved and beyond.

In this geopolitical framework, the Russian-Ukrainian conflict has led to an increase in gas prices and Algeria, a historic enemy of Morocco, has expressly threatened to suspend gas exports to Spain if the latter would have channeled it to the Morocco.

Spain in the first three months of this year received about 26% of the gas consumed by Algeria through the GME (Maghreb-Europe) gas pipeline and has ensured, through Minister Teresa Ribera Rodriguez, that “Not a single molecule of the gas arriving in Morocco can be attributed to the gas coming from Algeria”.

At the same time, Leila Benali, Moroccan Minister of Ecological Transition, declared that her country is about to buy LNG (liquefied natural gas) on the international market to be regasified in Spanish plants and then redirected to the Tangier and Ain Beni Mathar power plants closed some month ago, when Algeria interrupted the direct flow showing a determination hard to find elsewhere considering that in addition to the suspension of diplomatic relations, it prohibited the overflight of Moroccan aircraft through its airspace.

The Spanish Prime Minister, after recognizing that the autonomy plan proposed by Morocco in the Western Sahara conflict, is the solution "more serious, more realistic and more credible" last March, he gained antipathies and suspicions from Algeria so much that he now has to reassure the Algerian Energy Minister, Mohamed Akrab, to certify and make public the origin of the LNG transported to Morocco. Having no legal obligation to do so, will Morocco make this information public? Unlikely.

There is constant talk of Qatar and the United Arab Emirates as alternative sources of supply with which, especially the latter, Rabat has good relations and should get gas at discounted prices.

Minister Mohamed Akrab has indeed declared "any shipment of Algerian natural gas supplied to Spain, the destination of which is not that foreseen in the contracts, will be considered as a breach of contractual commitments and, consequently, could lead to the termination of the contract that binds Sonatrach with its Spanish customers".

Algiers is also irritated by the fact that the Spanish government is going to fill, through the pipeline, the energy deficit that Morocco has suffered since President Tebboune closed GME last October.

Should Algeria suspend exports to Spain, Italy and France would be ready to increase imports from it and Spain would increase its reserves by acquiring LNG from the United States (compared to the first quarter of 2021, in the same period of 2002 imports from USA have increased by 460%), however, paying more than what comes from the Oran-Almeria (Medgaz) gas pipeline and which does not require regasification.

On the one hand, the Spanish government extends its hand to the Moroccan government "To look for an alternative to its electrical and industrial needs" and on the other, it does not want to deprive itself of gas from Algeria, guaranteeing the latter that the gas that will end up in Morocco will not be Algerian.

“We would like to have better relationships than the current ones. We are not afraid of a gas outage from Algeria, but we certainly hope that things will go better " this is what he declared also in these days, during the twelfth edition of the conference "The State of the Union"1 which is taking place in Fiesole, Minister Teresa Ribera Rodriguez.

The continuous fluctuations of the Spanish government which tries to navigate between Algeria and Morocco, trying not to upset anyone, actually have strong possibilities of further irritating the two nations and exposing itself to further pressure from them; meanwhile, Algeria has already reduced the flow of gas in the Oran-Almeria pipeline and Morocco continues to postpone the opening of the land borders with Ceuta and Melilla and Spain has not yet activated the flow of gas to Morocco (citing reasons' techniques').

Italy remains to watch the developments of the affair in which once again, the forgotten conflict in Western Sahara originated the Algerian-Hispanic-Moroccan crisis and has significant geopolitical implications not only between Europe and Africa.

In the meantime, the UN continues its mission (MINURSO) in those territories, trusting in a lowering of the tones of recent times among the parties concerned.

Vilnius calls, Minsk answers. Thus, we can summarize the (nth) frantic hours in the relations between the little but ...
10488
Read

Lithuania has begun to ban the rail transit of goods subject to EU sanctions to the ...
12322
Read

The war in Ukraine - now close to the end of four months - has introduced us to some places whose ...
6872
Read

There are few doubts: the first ... unfortunate meeting between the Russian Fleet in the Black Sea and a couple of ...
9202
Read

Poland, after supplying Soviet arms and weapons systems worth $ 7 billion to Ukraine ...
8585
Read

The Russo-Ukrainian War threatens the survival of hundreds of millions of individuals around the world as claimed ...
31406
Read

President Joe Biden has signed the measure, approved by the Senate, which authorizes and facilitates the provision of a ...
14534
Read

A battalion-level tactical group (BTG) would have been annihilated by (yet another) Ukrainian ambush on the river ...
18512
Read

For several days in Chad (one of the poorest countries in the world) demonstrations against the French presence have been raging ...
2639
Read