Western weapons go to the Russians 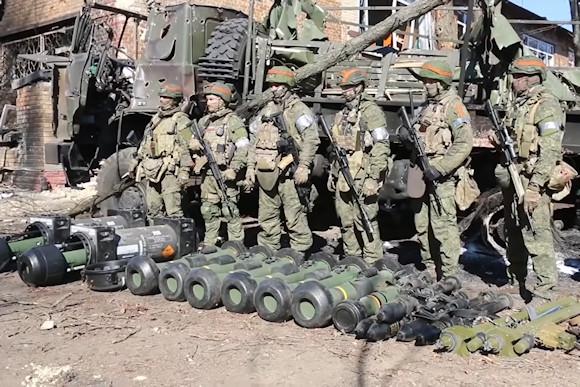 The Italian Parliament today voted for a new shipment of arms to Ukraine, in the vain hope that they will at least slow down (I don't think anyone seriously thinks that Kiev has any chance of victory) the Russian advance.

However, public opinion is not exactly cohesive about the usefulness of supplying weapons to a nation at war. Apart from the moral discourse, one should ask oneself whether the anti-tank and sup-air missile systems really end up in the hands of the Ukrainian regular forces or if they go to arm someone else.

Apparently the now famous FGM-148 Javelin, NLAW and Panzerfaust 3, the latter acquired by the Italian Army in the 90s of the last century (17.000 units), would have ended up in the hands of the Russians who are using them to arm the militias of the separatist Republics.

In practice, what has already happened in Afghanistan is happening, where the jihadist groups were able to dispose of huge quantities of weapons that NATO sent to the reconstituted Afghan Army which, as our readers will remember, melted like snow in the sun even earlier. the departure of Westerners from the country.

Beyond the tactical situation on the ground, the choice of the European Union and NATO to feed the Ukrainian “resistance” by proxy could reveal another failure. In practice, not only is the goal not achieved but money is spent to support the counterpart, as director Nanni Moretti would say: "Let's continue like this, let's get hurt".

The entry of Sweden and Finland into the Atlantic Alliance is in serious danger of causing, if not war ...
2642
Read

Libya makes people talk about itself again; she is an actress who cannot miss on the Mediterranean scene where, instead, politics ...
1994
Read

Vilnius calls, Minsk answers. Thus, we can summarize the (nth) frantic hours in the relations between the little but ...
11471
Read

Lithuania has begun to ban the rail transit of goods subject to EU sanctions to the ...
12468
Read

The war in Ukraine - now close to the end of four months - has introduced us to some places whose ...
7137
Read

There are few doubts: the first ... unfortunate meeting between the Russian Fleet in the Black Sea and a couple of ...
9356
Read

Poland, after supplying Soviet arms and weapons systems worth $ 7 billion to Ukraine ...
8668
Read

The Russo-Ukrainian War threatens the survival of hundreds of millions of individuals around the world as claimed ...
31562
Read

President Joe Biden has signed the measure, approved by the Senate, which authorizes and facilitates the provision of a ...
14581
Read