Home geopolitics Foreign Shorts The grip on Mariupol, the mockery of Kherson ...

The grip on Mariupol, the mockery of Kherson and the trap of Kiev… The war continues 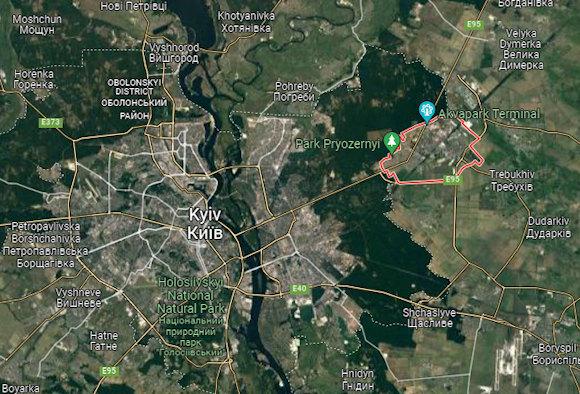 The situation on the ground in Ukraine speaks of ongoing offensives and counter-offensives and increasingly confirms that if both sides are not in a position to lose, neither side can truly win.

The Russians Mocked in the South?

Let's start from Kherson, the first - and so far only - Ukrainian city that fell into the hands of the Russians. Despite the huge protests against the occupation, what makes noise would be a blitz by the Ukrainian forces, a prelude to a counter-offensive in a south-southeast direction.

The attack, indeed the attacks, by Ukrainian forces on March 15, it is not clear whether with artillery, drones or aircraft, it could represent the greatest humiliation inflicted on the Russian armed forces and defense systems since the beginning of the war on February 24. last. If from a first observation, on the basis of the images of the MAXAR satellites, the destruction of three helicopters and the damage to the airport appeared, the @planet images taken a few hours later show the signs of a second attack, if possible, a devastation even bigger. Bellingcat talks about another five aircraft destroyed, even more signs of fires and three vehicles escaped from the Kiev counter-offensive. In short, the Russians not only failed to receive a first offensive, but they had at least a second, very visible one. 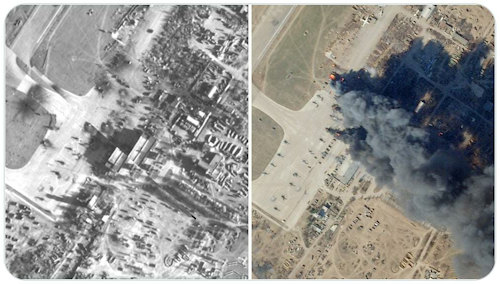 You can observe the two photos, taken after some time.

It seems grotesque that the frequent declarations by the Russian defense ministry regarding the destruction of Ukrainian air forces and anti-aircraft defense capabilities are followed, in addition to Washington's categorical denial, by this unjustified massacre.

The news is accompanied by others - now a daily practice for those who, like us, follow the war in depth - of shooting down Russian planes and helicopters. Despite not having provided videos and photos of everyone, only for Thursday 17 March the Ukrainians declared the shooting down of 7 Russian Federation aircraft, a helicopter and 3 UAVs.

In recent days, the Chechens have occupied important steel plants in the city, in a district that is difficult for the forces of Kiev to keep. Meanwhile, the Ukrainian paramilitaries of the Azov regiment - let's remember: ideologically akin to National Socialism and often in friction with the Ukrainian regular forces - they showed images of the destruction of four tanks and two armored personnel carriers of the Russian forces, also on March 17.

The battle of Kiev is not at a turning point

The Ukrainians seem to have given up on defending the territory between the north-east of the country and the town of Brovary (opening photo), located 20-30 km from the center of Kiev, preferring to "wait" for the Russian attacks in the streets and the ruins of the town, which has by now remained almost depopulated. It should be noted that the only viable route for the Russians if they want to attack Kiev from that side passes through the center of Brovary, but exiting the residential area enters a dense forest that covers the entire eastern side of the city. Having an oscillating depth between 5 and 10 km and an L-shape that wraps the same Brovary on two sides, it is to be excluded that this forest can be bypassed, since it goes far south of the Ukrainian capital, or - so to speak - removed with the use of incendiary devices, since the ground is muddy and there is still snow.

The impression is that Moscow's troops have gone into another bottleneck, like the one north-west of Kiev, near Bucha and Irpin. Some industrial plants built less than a kilometer inside the forest, could lend themselves to the launch of Russian paradutists, to hit the defenders in Brovary from behind: however, given the Russian difficulties in the skies of Ukraine, this would not have enormous possibilities of success.

Finally, it should be added that the supply lines from Russia to the Brovary hinterland appear extraordinarily long and difficult to manage.

The entry of Sweden and Finland into the Atlantic Alliance is in serious danger of causing, if not war ...
3097
Read

Libya makes people talk about itself again; she is an actress who cannot miss on the Mediterranean scene where, instead, politics ...
2060
Read

The war in Ukraine - now close to the end of four months - has introduced us to some places whose ...
7159
Read

Poland, after supplying Soviet arms and weapons systems worth $ 7 billion to Ukraine ...
8678
Read