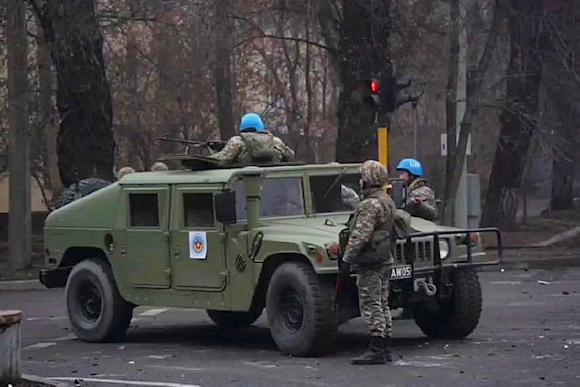 The closure of the Internet in Kazakhstan continues throughout the day of Monday 10 January even if it does not seem to have had great effects in calming the protests and political unrest. Earlier today, some users were briefly online for the first time in five days, while many in Nur-Sultan remain logged in. Many in the new capital, formerly called Astana, are unaware of what has happened in the rest of the country.

If the Internet is out of order, governments do not fail to send messages and tissues. Some are really perplexing, like the one below ...

According to the Ministry of Foreign Affairs of the Russian Federation, 1.600 requests for evacuation of Russian citizens to Kazakhstan have arrived in Moscow. Recall that almost a quarter of the population of the Central Asian giant is ethnically Russian, but not all Russian speakers are also Russian citizens. It is not known whether Moscow intends to use the anxiety of the Russian-speaking minority in the short term to justify a more massive intervention in the future.

It is a fact that a contingent is already present and that, as you are about to read, its mission does not appear entirely clear.

During a joint press conference with the Kazakh Ministry of Defense, the commander of the CSTO forces Andrei Serdyukov reported that the initial deployment of the troops has been completed: according to the Russian general, CSTO troops will be deployed in Kazakhstan until after the full stabilization of the situation in the country. However, at the same time the press office of Kazakh President Tokayev said that the CSTO mission could last in Kazakhstan as little as a week, as order has been practically restored in Almaty. Apparently no one asked for an explanation of this contradiction.

If this sounds like a strange charade, who knows what you will think of the crisis in the Kyrgyz crisis in Kazakhstan?

Kyrgyz President Sadyr Japarov says he is well aware that many Kyrgyz citizens are reported to be detained in Kazakhstan and that although some of them may take part in riots, the government will work to ensure that the innocent are released. Earlier today, the chairman of the Kyrgyz State National Security Committee Kamchybek Tashiev addressed the protesters in front of the Kazakhstan embassy claiming that the Kyrgyz government had delivered a protest note for the unjust detentions.

As if that weren't enough, in the last few hours the case of Kyrgyz jazz player Vikram Ruzakhunov has swelled out of proportion (and then deflated), who appeared - once arrested - in the Kazakh state media portrayed as a dangerous rioter. Previously, lawyers and diplomatic personnel sent by the Kyrgyz embassy were denied access to the prison to meet him. The same thing was repeated with all the Kyrgyz detainees in Kazakhstan. Then, after hours of tension, Kazakhstan security forces released the jazz musician and deleted his "confession" video in which he claimed he was unemployed and had been paid to participate in the protests. Meanwhile, it is known that the military contingent from Kyrgyzstan in the CSTO mission in Almaty will have the "TEC-2" power plant in custody.

Not even the two major powers in the world seem to have much of a grip on the Kazakh crisis right now. Read below to understand better ...

Beijing and Washington have their say

Chinese Foreign Minister Wang Yi said that China is willing to strengthen cooperation with Kazakhstan on law enforcement and security in order to jointly oppose interference from outside forces and ensure the security of key cooperation programs. At the same time, after three days, someone pointed out that certain invitations to the massacre of President Tokayev were a little "politically correct": for this reason, US Secretary of State Blinken at the end of the weekend condemned the statement by the president of the Kazakhstan to "kill without warning" and condemned such a policy if actually applied.

Speaking of murdered deaths, read below ...

Also over the weekend, Tokayev formalized the dismissal of two vice-presidents of the National Security Committee of Kazakhstan: Osipov and Ergozhin, both close to the former leader Nazarbayev. Meanwhile, a member of the National Security Committee, Colonel, Azamat Ibraev was found dead in the courtyard of his residence in Nur-Sultan. He reportedly fell out of the window.

Finally, the images of Kazakh soldiers on the streets of Almaty wearing United Nations helmets (photos), evidently used without a mandate from anyone, are traveling around the world. Maybe some rioters fell for it and got shot?

Vilnius calls, Minsk answers. Thus, we can summarize the (nth) frantic hours in the relations between the little but ...
8719
Read

Lithuania has begun to ban the rail transit of goods subject to EU sanctions to the ...
12159
Read

The war in Ukraine - now close to the end of four months - has introduced us to some places whose ...
6746
Read

There are few doubts: the first ... unfortunate meeting between the Russian Fleet in the Black Sea and a couple of ...
9124
Read

Poland, after supplying Soviet arms and weapons systems worth $ 7 billion to Ukraine ...
8554
Read

The Russo-Ukrainian War threatens the survival of hundreds of millions of individuals around the world as claimed ...
31337
Read

President Joe Biden has signed the measure, approved by the Senate, which authorizes and facilitates the provision of a ...
14505
Read

A battalion-level tactical group (BTG) would have been annihilated by (yet another) Ukrainian ambush on the river ...
18470
Read

For several days in Chad (one of the poorest countries in the world) demonstrations against the French presence have been raging ...
2624
Read