Home geopolitics Foreign Shorts War and noise of war between India and Paki ...

War and noise of war between India and Pakistan: update of the morning 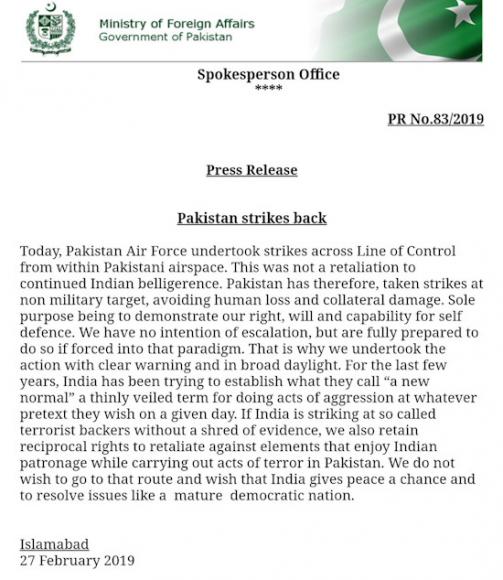 The ambassador of Islamabad in Washington has asked the United States to take a more active role in the crisis, not only to add - through the National Security Council and the Pentagon - to requests for moderation and not implement escalation that in these hours come from all the major powers.

Meanwhile, the airspace over the two countries remains closed, with heavy consequences for flights between Europe and the East / Oceania and today will not open the Indian schools placed in a band of 5 km inside the country, along the border with Pakistan.

In New Delhi, Prime Minister Narendra Modi announced that he does not intend to retreat in the face of international pressure and to have given a "free hand" to the armed forces to take whatever action they deem appropriate for the security of the country. Yesterday, the Indian government also handed over a file on the attack of the 14 February to the deputy high commissioner of Pakistan, which will be examined in Islamabad. Fortunately, there is no talk of ultimatum or explicit requests, at least for now.

Before concluding, we attach a copy of the statement by the Government of Pakistan in response to Indian attacks on terrorist camps located in the territory of Islamabad. It can be summarized in three lines, starting from the title: "Pakistan counterattacks: not for retaliation, not against civilian targets, without the will to start an escalation of the confrontation, but to demonstrate our ability to react. India has been provoking us for some years: we too, at this point, consider ourselves legitimized to hunt down Indian terrorists ".

We will update you in the second part of the day, hoping that you do not need it before.