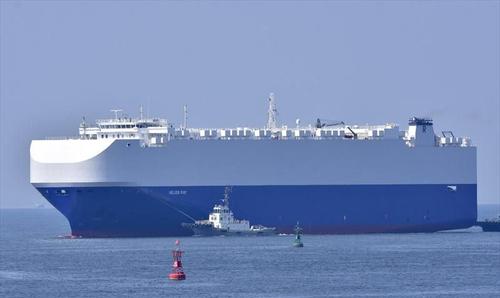 An Iranian Navy frigate, possibly a class unit Alvand, launched two torpedoes at a freighter owned by an Israeli company.

The cargo Helios Ray flew the Bahamian flag and carried vehicles from Saudi Arabia to Singapore. It is currently headed for the Dubai port for repairs, as the two torpedoes caused two gashes in the hull above the waterline, without compromising its buoyancy.

The accident - at least this is the most accredited hypothesis - took place last February 26 off the coast of Oman. It could have been an error of assessment by the commander of the Iranian unit, who would have mistaken the cargo for another target.

However, the leaders of the IDF accuse Tehran of having deliberately hit the Israeli ship, moreover the Knesset, the Parliament of the State of Israel, is considering the possibility of possible retaliation.

Iran refused government involvement in the incident, even though the Iranian newspaper Kayhan, very close to President Khamenei, labeled the attack on the freighter as a retaliatory gesture for the recent attacks by Israel and the US on Iranian bases in Syria and Yemen (thesis not very credible given the low intensity of the attack by the Iranian Navy).

However, the episode could further increase the tension between the two countries, in fact, to throw water on the fire, also the statements of the president of the Knesset Benny Gantz who declared that Tehran is trying to hit the infrastructures and Israeli citizens.