Home geopolitics Foreign Shorts What's behind the cancellation of the exercise...

What is behind the cancellation of the "Desert Shield" exercise between Russia and Algeria? 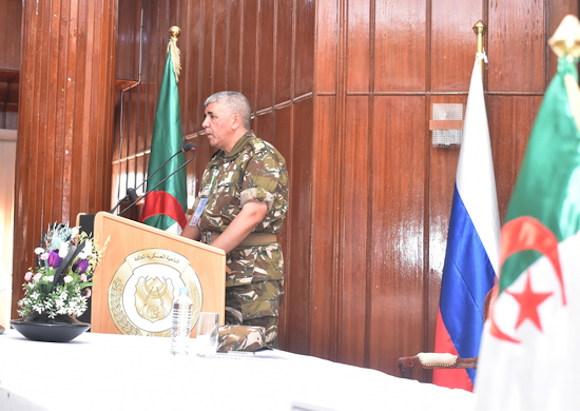 All the main newspapers in the sector announced the holding of the Russian-Algerian exercise called in recent weeks “Bouclier du desert 2022” (Desert Shield in English). Then came the announcement from the Algerian defense ministry stating that the exercise had not been carried out without specifying the reasons1.

Some analysts motivate the decision with the great expenditure of Russian energy on the Ukrainian battlefield2 but this can be denied as Moscow has, on the contrary, expanded its military influences in various areas and in particular in Africa.

The operations should have ended on November 28 and should have employed about two hundred soldiers of the two countries' anti-terrorist forces simulating operations in a desert environment.

The headquarters should have been established in the base of Hammahìguir about 50 km from the Moroccan border, the old French bulwark of the war of independence.

Algeria accuses Morocco of financing and training political entities, classified as "terrorists", such as the Mak and Rachad movements. The Russian Foreign Ministry spokeswoman said that the anti-terrorist exercises between Russia and Algeria are scheduled according to the military cooperation agreements, in order to reassure neighboring Morocco and “the military exercises in which Russia participates, within the framework of “Bouclier du desert 2022 " they do not target any third party.”

In fact, the cooperation between the two states is increasingly intense, already in October there had been joint naval maneuvers on the Algerian coasts and a few weeks ago Algeria took part in the great exercise Vostok 2022 in eastern Russia.

In commercial terms, Algiers plans to sign a 12 billion dollar contract for the purchase of military supplies from Moscow and this will be possible thanks to the increase in the Algerian defense budget that the government expects to approve in 2023, thus becoming the most important global importer of Russian weapons. The contract could include the acquisition by Algeria of the new Sukhoi Su-75 fighter "Checkmate" fifth generation.

The first flight of the Su-75 Checkmate is scheduled for 2023, with entry into service in 2026. The Checkmate it is intended to directly rival US F-22s and F-35s Lockheed Martin. We also recall that Algeria has acquired several drones “Aksungur” designed by Turkish Aerospace International (TAI).

“Aksungur” it is a medium-altitude, long-endurance (MALE) UAV with a high payload capacity making it an ideal platform for ISR and strike operations. The UAV Aksungur it is a variant of the UAV Anka of TAI. The fixed-wing unmanned aircraft features a twin-boom configuration and has a length of 12,5 m, a height of 3,1 m and a wingspan of 24,2 m. The payloads carried by the UAV are TEBER-81 (Laser Guided Mk-81), TEBER-82 (Laser Guided Mk-82), L-UMTAS, MAM-L, Cirit, MAM-C, HGK-3, KGK and small diameter bombs.

The close Algerian-Russian bond is certainly not born today but dates back to the times of the Soviet Union and is also solid thanks to the same vision of the world without forgetting that in the first years of the new millennium Russia canceled its debt of almost five billion dollars of Algeria.

But what are the reasons for the strengthening of Algerian-Russian relations?

One above all would concern the constant climate of tension with neighboring Morocco (see article: "Morocco vs Western Sahara, a continuous and never ending war") especially on the still unresolved issue of Western Sahara and even more since US President Trump supported Rabat on the legitimate claims to that area.

The last exercise should not be underestimated “Africa Lion” which saw the armed forces of the USA, NATO countries and Israel (historical enemy) in the field and the large hydrocarbon reserve which allows Algeria a certain position of strength.

Also to be considered is Algeria's ambition to fight the forces of the Islamic State close to and beyond its border with Mali, the latter, as we know, already a territory of Russian operations.

THE130% increase in Algeria's defense budget planned for next year, would lead to a doubling of military spending and this in order to gain greater weight in African geopolitics, not without aiming for expansion in the Sahel. Mali is nearby and the progressive French abandonment and the increase, however, of the Russian forces would facilitate a significant influence on it.

Already in September, a group of US lawmakers asked, in a letter addressed to Secretary of State Antony Blinken, for sanctions against Algerian government officials over an arms deal with Moscow last year worth more than 7 billion dollars. This would be classified as “a significant transaction” pursuant to the CAATSA (Countering America's Adversaries Through Sanctions Act) but nothing was done by the State Department. The letter also states that "The United States must send a clear message to the world that support for Vladimir Putin and his regime's barbaric war efforts will not be tolerated. Therefore, we demand that we immediately begin implementing meaningful sanctions against those in the Algerian government who have been involved in the purchase of Russian weapons. It is imperative that President Biden and his administration prepare to sanction those who try to finance the Russian government and its war machine through the purchase of military equipment.

Algeria's aspiration to join the BRICS group is well known and President Tebboune stated during the last forum of the organization “the BRICS interest us” because they represent an alternative to traditional power centers by allowing “distancing yourself from the attraction of the two poles”: on the one hand the grouping of democracies, led by the United States and on the other hand the autocracies such as Russia and China. The Algerian abstention from the resolution of the United Nations General Assembly to condemn the annexation to Russia of the four regions of Donetsk, Luhansk, Kherson and Zaporizhzhia can be seen in this light.

The feared sanctions of the CAATSA by the United States and the possible deterioration of relations with the BRICS, which would prevent it from being able to satisfy the ambition of a future membership of the organization, could be the most realistic reasons which led Algeria to cancel the big drill “Desert Shield” with Russia.

Net of this episode, coalitions are increasingly accentuated in North Africa Algeria-Russia-Turkey on one side and USA, Morocco and Israel on the other. We'll see what happens.

The death toll from yesterday's suicide attack in a "Pakistani" mosque has risen to 89 dead and 160 injured...
1996
Read

Within a month, the approximately 400 soldiers of the French forces of the "Sabre" operation will have to leave the territory of the ...
2409
Read

Al-Shabaab strikes again1. This time the balance of the attack against a Somali army base perpetrated by ...
1212
Read

In less than a year, the African continent has experienced eight coups and attempted coups. But the cravings of…
1579
Read

While in Italy there is more or less serious discussion of "mini naia" and its possible form, duration and purpose,...
1709
Read

The trial of Salih Mustafa, a former commander of the ...
2343
Read

During a recent trilateral summit with the President of Azerbaijan, Ilham Heydar oğlu Aliyev, and that of the ...
1276
Read

The High Court in London has found the British government's plan to send asylum seekers to Rwanda lawful. The...
1289
Read

Peru has declared a national state of emergency. Over the past week, since now ex-President Pedro…
1997
Read