Home geopolitics Foreign Shorts Chad, evidence for another coup in ... 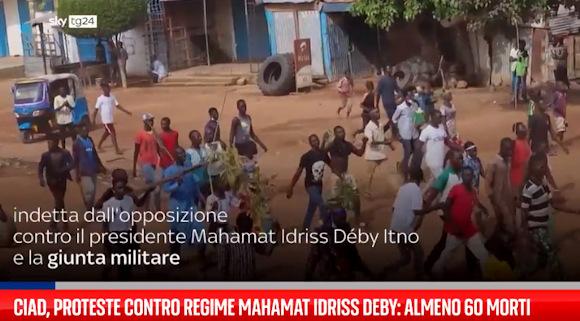 Chad, Thursday 20 October. About 30 anti-government protesters were killed in N'Djamena and another 32 in Moundou by security forces during clashes with police. People demonstrated against the leader Mahamat 'Kaka' Idriss Déby who illegally extended his mandate by two years. The police fired tear gas at the crowd but the protesters continued to advance and their numbers grew. It was then that the security forces opened fire on the crowd, leaving a trail of death.

Prime Minister Kebzado said the security forces responded "only for self-defense" since the demonstrators were armed and were trying to "take power by force". A government decree states that "this march is intended to create a popular uprising and is armed with the support of external forces to destabilize our country"1.

The government has declared a state of emergency in the capital, N'Djamena, and in the cities of Moundou and Koumra, giving a free hand to the respective regional governors of "take all necessary measures in accordance with the law"2.

The government also banned the Wakit Tama civil society coalition and announced a three-month suspension of the activities of seven parties, including the Transformers Party and the Socialist Party Without Borders.

Succes Masra, leader of the Transformers party, said on his Facebook page that more than 70 peaceful protesters were killed and 1.000 arrested across the country, adding that the "macabre count is not yet exhaustive".

What are the causes? Chad plunged into a protracted political crisis in April last year following the passing of President Idriss Deby. After 30 years of government Deby died from his injuries while he was in Mao, in the western province of Kanem, in the clashes that for several days involved the army and armed rebels of the Front pour l'Alternance et la Concorde au Tchad (FACT ).
In his place was his son Mahamat Deby, head of a transitional military council that had promised new elections after eighteen months.

On August 20, negotiations began with opposition parties and civil society groups to define a constitutional framework in order to create a new government. At the end of the talks, the dissolution of the transitional military council was announced, the calling of new elections was postponed for a further two years and Mahamat Deby was confirmed as head of the government with the possibility of running as a candidate at the end of the transition period. The rebel group Front for Change and Concord in Chad and the Wakit Tama movement did not participate in the August forum.

These operations sparked anger and frustration among members of opposition parties and civil society groups who took to the streets of several cities in Chad on Thursday to protest.

Central Africa project director at the International Crisis Group, Enrica Picco, said the protests came as no surprise. "Frustration and discontent among the opposition have grown since the start of the national dialogue as there were no signs from the junta to guarantee they will leave power at the end of the transition. Deby has been confirmed as president of a national unity government. put together in less than a week and which reproduced the same lack of representation that many civil society groups have denounced since last summer " said Picco.

The international community unanimously condemned the violence in Chad. The UN, the EU and the US have asked all parties to tone down and ease the tension, but members of the opposition have promised to continue protesting.

United Nations High Commissioner for Human Rights Volker Türk, appointed just over a month, condemned the lethal use of force against demonstrators and killings.

The United Nations also asks the "Competent state institutions to conduct impartial, timely and effective investigations into any human rights violations that may have occurred, including the apparent use of unnecessary or disproportionate force to disperse protests."

The US Embassy in Chad has posted a photo on its social media channels showing the ambassador kneeling in a street with bloody clothes beside him.3. Also the United States through the State Department declared "We also condemn the attack outside the main gate of the US embassy in which assailants in civilian clothes and private vehicles cleared police checkpoints and killed four people."

Quickly France, with a note from the Foreign Minister said that “Has no role in these events, which are strictly a matter of Chad's internal politics. The false information on an alleged involvement of France has no basis ".

Central African Republic, Mali, Burkina Faso, Chad, Sudan only since the beginning of this year have they seen protests, demonstrations, coups and sudden changes of government with consequences that directly or indirectly affect us but which do not seem to interest anyone.

Is the Sahel still, for some, a strategically irrelevant space?

The death toll from yesterday's suicide attack in a "Pakistani" mosque has risen to 89 dead and 160 injured...
2421
Read