Attack in Kabul: wounded 14 arrived at the Emergency hospital 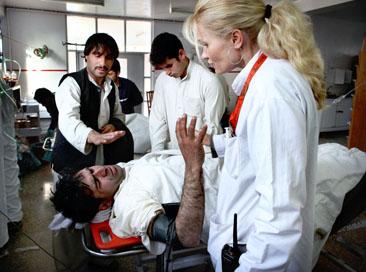 This morning, at 9 local hours, a strong explosion announced an armed attack in the main military hospital of Kabul 'Sardar Daud Khan', in the central district of Wazir Akbar Khan, causing the death of at least four people and over wounded 66.

14 are the wounded who arrived, about an hour later, at our hospital in Kabul, which offers free surgical assistance to war victims.

"We have received 14 patients. Most of them have blast injuries and gunshot wounds. The explosion, in fact, was followed by a shootout inside the wards, on the second and third floors of the hospital. Among the injured there is also a child of 7 years, injured in the side due to the explosion, currently under observation."Says Sara Cattaneo, a nurse Emergency in Kabul.

"The security conditions in Kabul are increasingly unstable”Adds Sara. "Emergency is present in the country from the 1999 and, since July 2010, to face the ever worse consequences of the war, the admission criteria in our hospital are limited to war surgery only. Every day we receive injuries from Kabul and neighboring provinces. There are frequent attacks like today, which also take place in hospitals, trampling all fundamental rights".

The war in Ukraine has multiple side effects, including the run-up of the countries most dependent on ...
2600
Read

At the height of three days of tensions, the Latvian parliament approved a bill allowing the ...
83442
Read

On 7 May, NATO Secretary General Jens Stoltenberg of Norway during an interview with the newspaper ...
3491
Read

“The Russians don't have the ability to enter the Azovstal tunnels ... That's not just a normal tunnel, that's a ...
11311
Read

The escalation of tensions between Russia and Israel continues. The statement on ...
7879
Read

This tweet you see is not the reaction of a keyboard lion, nor the post of a bored retiree passing the ...
3434
Read

Yesterday, on the sidelines of the visit of the speaker of the American lower house, Nancy Pelosi, Jim McGovern, a ...
5951
Read

"A major escalation is avoidable", so tweeted a few days ago Tor Wennesland, special coordinator of ...
957
Read

This would be an unbelievable story, if the protagonist on the Russian site hadn't told it, complete with video ...
7814
Read