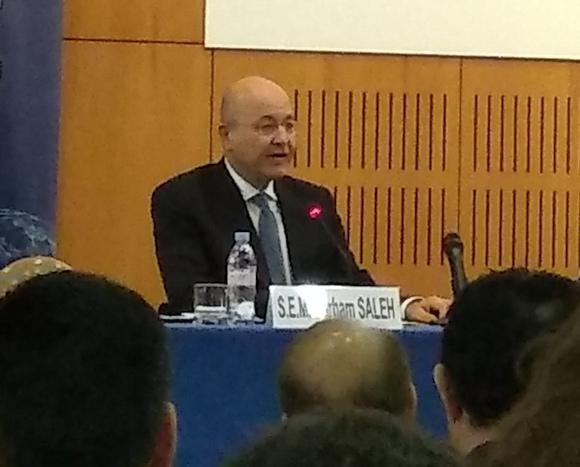 The debate is led by Thierry de Montbrial, president of the father, one of the most influential think tank in the world.

President Barham Saleh, elected last 2 October 2018, is presented as a calm person, patient, convinced of his ideas but open to discussion.

His country, he says, is a country that is coming out of the destruction of the last war, putting in front of everything the desire to create something to be left to young people, putting aside hatred and resentment. Since his election he has begun to visit his neighbors, Iran, Afghanistan, Russia ... and everyone has talked about the desire to change course, the need for Iraq to return to a stable and secure country, because from stability and security everyone can gain, not just the Iraqis but also all those who have ties to Iraq.

An example strikes our Western imagination, the destruction of the two world wars, recalled by President Barham Saleh to compare it to the destruction suffered by his people. If Europe managed to recover after such a massacre, well, then we can be optimistic and say we can also be Iraqis ...

Politics is important, he says, but also work for young people, population growth, earnings, industry, the fight against corruption, culture ... There are still many things to do, many challenges not just difficult challenges, but we all want to give a strong signal that we can return to normal.

A signal of hope from the president of a land destroyed by the war but that, at least so it is hoped, wants to move forward, overcoming the obstacles in front of him and returning to life.

These, in short, the concepts expressed in the evening and for which I feel I wish the president best wishes for the future.