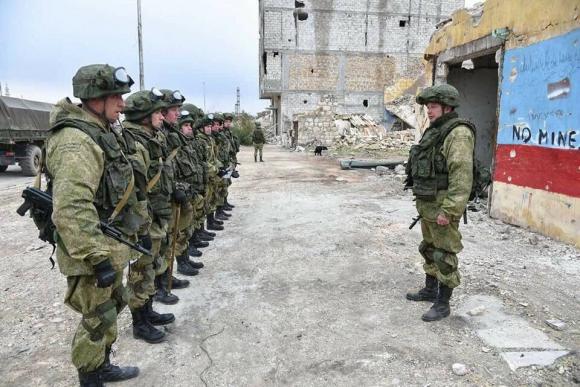 Although it is still very premature to talk about a return to normality, the situation in the metropolitan area of ​​Aleppo is improving day by day.

After the diffusion of UNICEF data in recent days on the reopening of 20 elementary schools, the return to education for 6500 children, the beginning for a pediatric psychological support and the beginning of education courses on the danger of unexploded ordnance, continues land reclamation work carried out by the Russian armed forces.

The list of priorities highlights the securing of the urban area threatened by IED and minefields.

According to Igor Mihalik, head of the Russian International Antimine Center, the Russian army would have directly provided for the reclamation of 3210 buildings, 200 social structures, 2.000 hectares of land and 709 km of roads. Instead, 30.000 would be almost the explosive devices neutralized in the areas torn from jihadists last December. In all, it would be about 10.000 Syrian citizens returned to their homes (or what remains of them) in the eastern districts of Aleppo.

After the direct reclamation, the Russian armed forces are taking steps to educate the Syrian military and police on the subject. The first group of 70 Syrian operators began training on January 31st. The trained personnel will soon be able to accelerate the complex demining work that still affects the entire area of ​​the second Syrian city occupied for years by Islamic fundamentalists.

The return to normality also passes through the restoration of basic security, in a city abandoned to war for more than four years. Great importance was given to operations on the territory given to the Russian Military Police battalion operating in Aleppo, consisting mainly of Chechen soldiers.

The approximately 400 Chechens involved, as stated by Kadyrov himself, President of the Caucasian republic and very loyal to Putin, are of Islamic religion and therefore particularly suitable for interaction with the local population, which would have already shown appreciation.

Chechen special departments had already been deployed in Syria in the past, officially for the protection of the Hemeimeem airbase in Latakia.