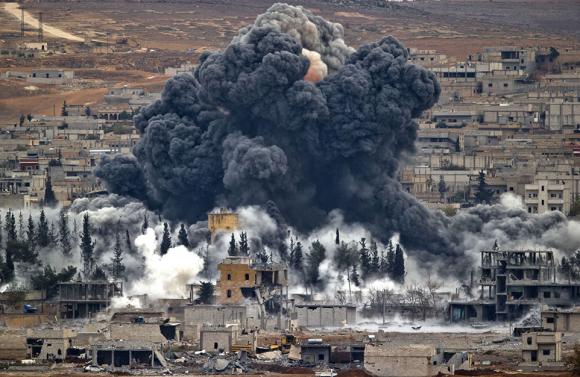 The news started from Damascus; reported by the Arab media, it is also bouncing through some Western agencies. On the afternoon of the 12 April, an attack by US-led Coalition planes against Islamic State positions would have hit a chemical weapons depot, causing a massacre between militiamen and civilians. The attack was conducted in the eastern suburbs of the city, a stronghold of the Syrian army, surrounded by 4 years from the caliphate hordes.

Local sources speak of a large fire that broke out in the evening from which a large cloud would have developed. Damascus speaks of "hundreds of dead and wounded", both among the militiamen of the Caliphate and among civilians, but the data has not been confirmed by independent sources.

Deir Ezzor, as Defense Online has repeatedly specified, is a Syrian bastion, divided into two sections: the city on the western bank of the Euphrates and the airport. Both sections are inserted in a desert area controlled by militiamen of the Islamic State, which for years in the Great War style, continue to attempt assaults. Despite the numerical superiority and repeated use of car bombs by terrorists, the Syrian garrison (among which the 104 stands outa Paratrooper Brigade of the Republican Guard) has so far resisted. Difficulties in maintaining contact and receiving supplies have often led to a collapse or evacuation of the city.

For about a month, the area has returned to the spotlight: after the second liberation of Palmyra, Syrian forces are trying to shorten the 150 km of desert that separate the lines east of Palmira from Deir Ezzor, encountering fierce resistance from the militiamen of the Caliphate (see article).

So far Deir Ezzor had only been touched by aircraft of the Western coalition. In one of the raids last September, positions of the Syrian army had been hit "by mistake", causing almost 100 deaths in the ranks of Damascus forces.

This time no error, with the exception that the affected deposit had side effects.

The attack, if confirmed, would show how ISIS (and presumably even the jihadist rebels) are in possession of unconventional weapons, clearly arriving in Syria through Iraq.

The political reflexes of the news fit together in a particularly difficult context, following the Idlib events and the consequent American attack on the Syrian base of Al Sharyat.

The entry of Sweden and Finland into the Atlantic Alliance is in serious danger of causing, if not war ...
3167
Read