Home geopolitics Analysis Much ado about nothing?

Much ado about nothing? 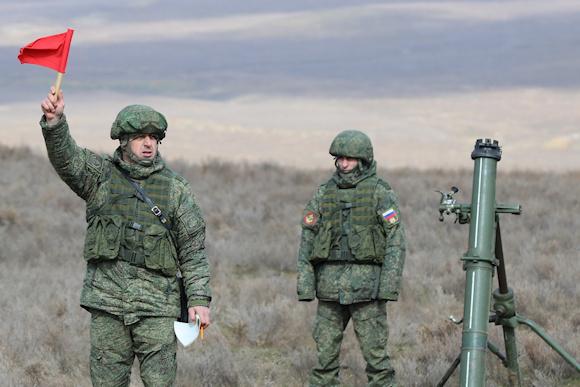 It would seem that the Ukrainian crisis (perhaps) has all fine produced effects of some importance on the global geopolitical equilibrium.

It appears, in fact, in all its evidence that Putin has brought back there Russia to tread the international stage, as a leading actor and essential for dealing with major planetary issues.

The long sequence of ministers and secretaries of state who unsuccessfully went to Kiev and Moscow also highlighted the inconclusive activism of a Western political disunity that needs more to appear than to be. The real crises, in fact, have never been resolved in front of the cameras or with text messages on the cell phone. The real crises have always been resolved through close diplomatic contacts, not overt but sincere, frank and direct. Contacts to which conversations between leaders are usually added. It is possible that, in parallel with the "journeys of peace", such contacts really took place. We will never know. However, the long sequence of trips to the two capitals affected by the crisis, widely publicized days in advance and documented by long television reports, highlighted the subjection of Western politicians to the need to appear (rather than solve the crisis), to feed a narrative which, in their respective countries, is increasingly representing the main direction of political attention.

Whatever Putin had in mind from the start, it was certainly not the vibrant protests or British military aid in Kiev or the dispatch of 3.000 US troops to Poland that prevented him from moving forward, as these are obviously not very consistent moves. in front of the more than 130.000 soldiers deployed from Moscow to the Ukrainian borders. And in fact, the line of contact between the Ukrainian forces and the independence rebels of the two self-proclaimed pro-Russian people's republics of Donetsk and Lugansk has continued to remain "hot" as in the last eight years, since Russia took over the Crimean peninsula and Sevastopol, an indispensable military port that allows Moscow to project itself into the Mediterranean.

The Ukrainian crisis has also highlighted the emptiness of promises not translated into formal documents. The numerous Western denials of the Russian call on a gentleman's agreement, with which some NATO countries would have reassured Gorbachev, eager to put an end to the Cold War, about the renunciation of the eastward expansion of the Atlantic Alliance, seems to have recently been refuted by a confidential document published on Friday 18 February by the German magazine Der Spiegel . If the authenticity of the document were confirmed, it would be one of the worst ugly figures in history, which could not fail to have an impact on the credibility of the Alliance itself, with significant overall geopolitical implications. 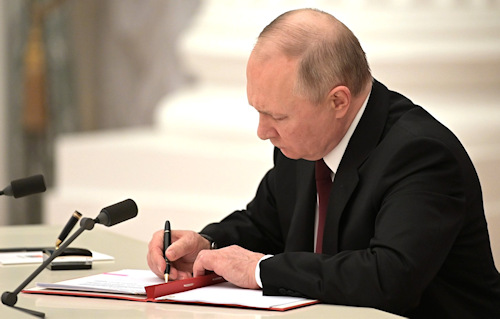 Now, after recognition (however widely predictable) of the two separatist republics, many are wondering what Putin will do.

In these hours many analyzes are intertwined and opinions are added to each other. There are those who wonder if Putin will be satisfied with having started his personal operation of peacekeeping on the territory of the self-proclaimed secessionist republics or if it will continue its advance to occupy all the areas they claim. In particular, the Donetsk oblast represents a big question mark because it could be particularly attractive for Russian interests, as the important commercial port of Mariupol is located on its coast, indispensable for Russia to guarantee the shipment of its products, especially oil products, by sea.

With reasonable certainty, Putin will not occupy all of Ukraine, as many have fancied in great detail. Simply because he does not need to send soldiers to occupy and control a very large country populated by about 43 million souls. For the Russian leader, in fact, it was enough to confront the West with its own inconsistencies.

Although it was clear enough from the start that Moscow had no real intention of going all the way to Kiev with its troops, rather than trying to immediately find a diplomatic solution to the understandable (which does not mean legitimate) perplexities of Putin, the main leaders Westerners blew the fire until a war broke out, forgetting that ... the war in that area has been going on since 2014, albeit of relatively low intensity. Was the alarmism with which they emphasized the situation the result of forgetfulness, the need to sell newspapers or the need to distract attention from other (perhaps internal) problems? As it happens, the most "convinced" supporters of the imminent planetary catastrophe were precisely the leaders who have most problems with internal consensus or imminent elections.

Biden, first of all, that he has both problems, having to deal with a dramatic loss of consensus in his homeland, for a policy that is not responding to the expectations of the voters, and with the MidTerm elections now on the horizon, which they promise to represent a débacle of the party that supports the current US president. Added to this is a galloping inflation that is scourging the country and adding the weight of apprehension on American families. A situation that up to now has led about thirty deputies to "drop" the incumbent president to his fate and not show up for next autumn's appointment. 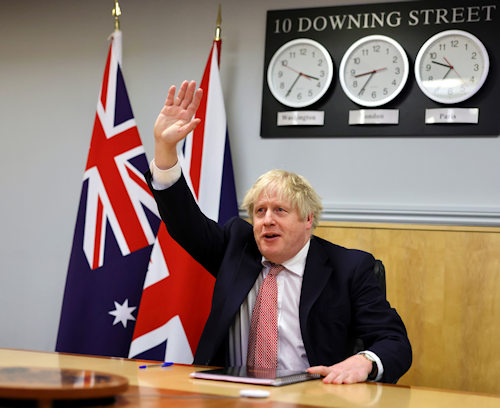 Then, there is Boris Johnson, whose intemperance as a "Marchese del Grillo" in a time of pandemic, during which he forbade others what he and his friends happily allowed themselves, have led more than one Briton to question his real ability to manage a complex country like the UK is more than a politician demanding that he resign. A request to which Johnson responded in the manner of Alberto Sordi in the aforementioned film.

Then, there is Macron, whose problems ahead of next April's presidential elections are evident to all observers, with the anti-European right and ultra-right appearing to be advancing irresistibly in the polls. To his partial help, however, the one who was indicated as the main challenger has recently arrived, the republican candidate Pécresse, who during an important rally appeared excessively awkward to be able to aspire to the second position, which guarantees access to the ballot.

It is very likely Putin will stop at the borders of the territory currently controlled by the separatist factions, in fact consolidating a situation that has already existed since 2014. As mentioned, he doesn't need to occupy all of Ukraine. He has already brought out all the Western inconsistencies and made the Ukrainians understand that the West has no intention of dying for them and the world that the West is no longer willing to bear the political, economic and human weight to protect the principles on which its civilization is based, first of all the freedom of self-determination of peoples. Nothing particularly new, given that they are the same reasons that led to the escape from Afghanistan last summer, and that led to the formulation of recent declarations, with which the threats of economic sanctions have not gone further. .

Putin will want to close the issue as soon as possible and, therefore, it will continue to exert pressure on Kiev, aiming to present itself at the next negotiating table in a position of strength, to achieve its objectives.

Although in the immediate future, the presence of Russian forces in the Donbass will probably mean a greater propensity (as some polls would seem) of Ukrainians towards NATO membership, in the medium term it could lead to a more moderate position of equidistance in Kiev and of renouncing entry into the Atlantic Alliance. A decision that would reassure Moscow in terms of security (but not only) and remove the chestnuts from the fire in Brussels, not forcing it to make difficult decisions. 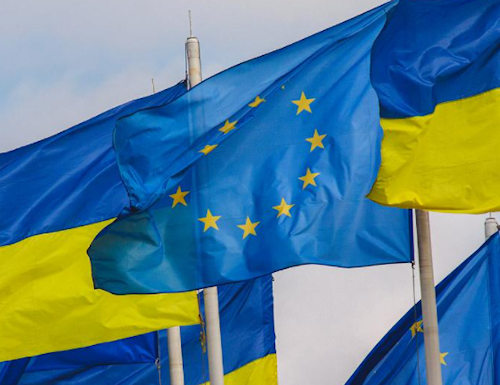 For its part, Europe, for a short period of time, will scream, tear its hair, apply sanctions, perhaps even heavy ones, but having acknowledged that these will harm Europeans more than Putin, it will resume dialogue with Moscow, as has happened. in the last eight years, after the occupation of Crimea. It is about pure and cynical real politik. Should the European peoples, who now say they are deeply indignant at Putin's moves, following the sanctions should be forced not to adequately heat their homes because the right amount of natural gas no longer arrives from Russia (we depend on Moscow for 45 % of our consumption), or reducing industrial production, or seeing bills grow further, would probably no longer be so in favor of sanctions against Russia.

It must also be said that Washington has tackled this crisis with an eye to the geopolitical implications related to the Taiwan issue (still recognized as independent by only 15 countriesi, USA excluded), thinking that the territorial integrity of a state cannot be defended with alternating current, depending on the interests of the moment. It is no coincidence that China, as reported by our media, during the meeting in Munich of the G7 foreign ministers (19 February 2022) strongly reaffirmed the concept of the inviolability of the national territory (obviously thinking precisely of Taiwan, which Beijing consider Chinese territory).

So much ado about nothing then? No, something has changed, something that leaves its mark. But not only as a result of Moscow's now nineteenth-century vision of security (the need for neutral territories of geographical separation between the contenders) but also because of a sort of delusion of omnipotence, blindness and lack of strategic vision of those who, instead, they could and should have foreseen and avoided the onset of the crisis.

However, more than a Shakespearean work, a Pirandello masterpiece seems better suited to the story: So it is, if you like.

The only hope is that from all this, those in duty have learned something.

The international situation is evolving rapidly and there is no country that does not have to adapt. In an area of ​​course ...
5267
Read

The vote in the UN Assembly of the motion condemning Russia's aggression against Ukraine has ...
3095
Read

The Ukrainian conflict does not stop international relations, which are bound to each other by a globalization ...
2315
Read

The rise of China as a global economic and geopolitical superpower has heightened tensions and concerns about ...
3251
Read

Last May 23, with a grand ceremony attended by President Recep Tayyip Erdoğan as guest of honor ...
4486
Read