Home geopolitics Analysis Taiwan and Trevi Fountain. Everything is Geopoli ... 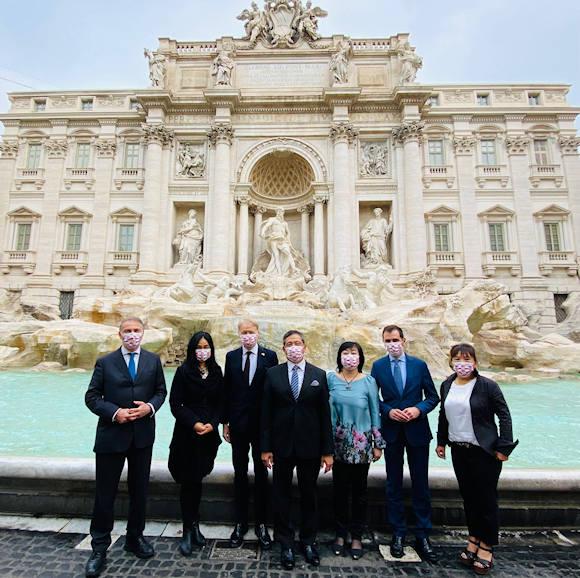 On May 4, a meeting was held at the Trevi Fountain in Rome between the ambassador of the Taipei Representative Office in Rome, Andrea Sing-Ying Lee, together with the leaders of the Taiwanese community with Italian citizenship in Rome, and the presidency of the Italy-Taiwan Interparliamentary Friendship Group - the president sen. Lucio Malan, the vice-presidents on. Marco di Maio and Hon. Alessandro Pagano. The meeting took place to urge the return of Taiwan (Republic of China) as an observer member of theWorld Health Organization (WHO).

The event, as well as the press release that followed, aimed at underlining all the advantages that this entry would have, hides deeply geopolitical issues behind an apparent neutrality.

We start from the structure in question, or theWorld Health Organization, which is the United Nations Agency responsible for coordinating the health issues of all its member countries.

Here it should be clarified that the United Nations (UN) is not the government of the world, that is, it does not have the task of impartially representing all interests, since relations between communities are always a complex web of more or less disciplined power relations. through geopolitical balances achieved from time to time. The balance of these relations, reflected in the backbone of the United Nations, is that established by the victorious powers of the Second World War. The UN is therefore certainly a forum of democratic discussion, but not of democratic decision, being the dome formed by a Security Council, whose permanent members (United States, Russia, China, France, United Kingdom) have a right of veto. , sufficient to prevent the aforementioned powers from being harmed by the interests of others, whether individual or collective. Above all, fair or unjust whether those interests are.

This structure and therefore these hierarchies necessarily have repercussions in the individual agencies, when they are forced to deal with phenomena, the scope of which is vital at a global level, as the pandemic was. Covid 19th. This virus has not created new balance of power, but has triggered national and international policies and diplomacy, which have underlined alliances and fractures between the powers. Here then is that we can go even further into the issues implicit in the Rome event.

If a country is not part of an organization, whose articulation, but ultimately its very existence, are determined by power balances (or imbalances), it means that someone, whom that organization is able to influence, has made sure that that country was not part of it. In this case, China. When we also speak not of Taiwan Embassy in Rome, But say Taipei Representative Office, it is emphasized that the vast majority of countries, including Italy, which officially recognize the People's Republic of China, are forced to accept the cardinal principle of the same, according to which there is only one China, and Taiwan is considered an integral part of its territory by Beijing, illegitimately separated.

Therefore, according to Beijing, Taiwan is not a state and cannot be part of an agency of free and sovereign states. So asking for Taiwan to join it means belonging to a geopolitical field and trajectory that want to oppose China. That the issue is tragically geopolitical can therefore be understood considering that, speaking of China and Taiwan, we are speaking of the United States.

Taiwan, an island facing mainland China, is one of the pillars of the containment that Washington implements against China, along its coasts, to prevent it from ascending to the primacy of world power.

The game is deepened even more if we consider the opposite anti-covid strategy implemented by Beijing and Taipei.

Taiwan is a democratic state and at the same time, as we said, excluded from the World Health Organization. He tried to combine these two characteristics to make it a single powerful element of success. It has never made a total and continuous lockdown, at the same time it has implemented effective information policies and parallel contrast to disinformation, has an excellent health system that covers 99% of the population and has its own production of medical devices, as well as to be able to produce, albeit with not superlative results, its own vaccine, the Medigent.

With the pandemic still underway, the Taiwanese strategy to combat the virus can be defined as a successful policy (less than a thousand deaths in total on more than 23 million inhabitants in two years).

Taiwan has tried to exploit it at this point to insert itself in the world's geopolitical dynamics, transforming itself from case to model and from model to model alternative to the Chinese one.The paradigm of Taiwanese success has been to reconcile democracy, therefore citizens' rights, and contrast to the virus, in addition to a diplomacy of medical devices made up of donations, aimed at exporting its own example and therefore its own state legitimacy, in competition with a China that kept the virus at bay through a very strong repression, which produced poorly effective vaccines and which he preferred to donate it first and mainly abroad, rather than to his own citizens, and among foreign countries to those liable to be blackmailed to officially deny Taiwan. Taiwan has thus managed to use its exclusion from the WHO, has strengthened confidence in its democratic system and in the effectiveness of institutions, and has managed to do so by reaffirming and strengthening its belonging to the American camp, precisely because this guarantees its existence. independence from China. Not only that, all this in turn contributed to consolidating the emergence of a specific identity of the island's inhabitants, so as to further legitimize in the eyes of the international community a protective umbrella in the event of a Chinese invasion, since it would be the invasion. of a community that now feels different from the Chinese one (According to the Chengchi National University Electoral Studies Center, 62% of the population currently feels only Taiwanese, although 98% are of Han Chinese descent.). It is no coincidence that the exclusion from the WHO took place precisely in correspondence with the rise to the government in 2016 of Tsai Ing-wen, of the progressive Democratic party, or of that political party favorable to the definitive independence of the island.

Everything outlined so far allows us to draw a balance, which is linked to the conflict between Kiev and Moscow. The World Health Organization and therefore the United Nations do not govern the world, they do not decide it, at most they mirror it and in moments of crisis, such as those in Ukraine, they reflect above all its limits and contradictions, vetoes and counter-vetoes. The UN is not powerless, but only because it is not a subject. For this reason it fails to act effectively in creating conditions of peace in Ukraine and for this reason it is a structure totally conditioned by the scales of current power and by world attempts to modify it. Suffice it to say that Russian missiles also fell on Kiev at the time of the visit of the UN Secretary General Guterres, who would also represent Russia.

Asking to become an observer member of the WHO is one of the many bolts that the American empire seeks directly or indirectly to tighten in view of the decisive challenge against China's rise. An ascent that is all the more or much less performing depending on the outcome of the dispute in Eastern Europe, that is, depending on whether and to what extent Russia will slip into the constraints of Chinese power.