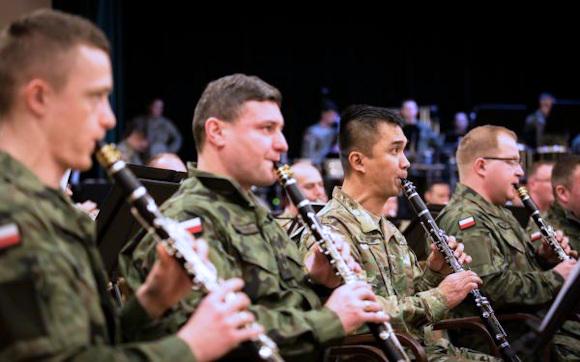 Given the landscape we will examine, like Mickey Mouse in Fantasy fabric we will be accompanied by a soundtrack to help in the feel the feelings of a world characterized by a violent and passionate history, that of Central Europe. (1. Mussorgsky Pictures at an Exhibition).

Let's start with a couple of assumptions: History is not over despite Fukuyama, and Central Europe still remains an aggregate of highly reactive political subjects: the apparent slumber resulting from the fall of the Berlin Wall has reawakened latent geopolitical processes in the Central European area and Balkan. Armed conflicts and fragmentation have in fact created from the Sea of ​​Azov to the republics of the Caucasus theArc of Crisis designed by Brzezinski1. In 1918 it is the lack of a hegemonic power that brings Pilsudski's Poland2 to hypothesize a political entity extended from the Baltic to the Black Sea, destined to contrast Greater Germany and Greater Ukraine; It is the current political evolution that induces Poland, interested in the Balkan enlargement, to present itself as a Russophobic element aimed at the west and with an extended influence between the Black Sea, the Baltic and the Adriatic in the security framework guaranteed by NATO, an antemural that intends to prevent updated reissues of Russian-German liaison dangereuse. (2. Shostakowitsch Sinf. N. 7 Leningrad). 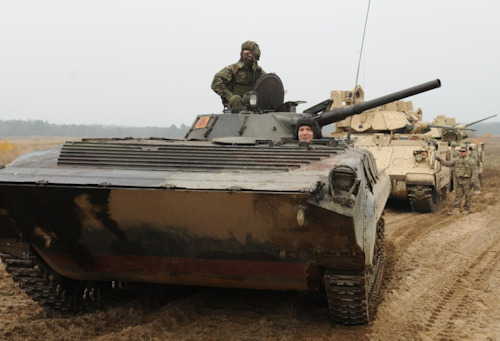 The ambivalent feeling of fear and hatred for the Russian Bear unites many countries, once in the past, now in Atlantic orbit, in the refusal to historical political rehabilitation of the Kremlin, eager for a new sphere of influence, and leads them to be inclined to a militarization of borders; in fact, the approach to the USA is the consequence of a policy that intends to hinder Russian western approaches, by setting up regional projects that strategically weaken any type of dependence on Moscow, as with the Trimarium3, created in 2016 on Polish Croatian push; expressly precluded in Berlin and to the countries that could have ballasted the common political action, the Trimarium is aimed at attracting infrastructure investments aimed at strengthening vertical geographical connections in the energy field, while suffering from congenital shortages of resources which the US has tried to remedy, interested in slowing Germany as well, with the Transatlantic Energy Cooperation Partnership, Polish - American axis aimed at hindering Nord Stream 24; in this context is added the action exercised by the Visegrad Treaty, initially ratified to facilitate European political integration but then became a symbol of intolerance towards any type of diktat, even if coming from Brussels and no longer from Moscow, a political reality that bears the signs of Budapest '56 and Prague '68 and now economically favored by the low labor costs that has facilitated the insertion in the industrial chain of the European market, also if conditioned by the use of coal for which replacement Warsaw is planning, by 2033, the construction of its first nuclear power plant. (3. Addinsell - Warsaw Concert).

Central Europe therefore remains a political-strategic node area, where the attraction of the USA will continue, engaged in the overproduction of liquefied gas for Eastern Europe, and considered the needle of the balance of controlled relaxation, also because they are prodded by projections of emerging global and regional hegemons. They are the USA, forced to rebalance in Europe by slowing down the pivot to Asia, to establish the value of the Middle-earth in function of the need to contain Moscow entrusted to the Baltic States, Romania, Ukraine and in particular to Poland, the theater of Defender Europe, exercise that had two objectives: a tactical one, consisting in testing the transfer of forces from the West in case of conflict, the other strategic, aimed at reaffirming Washington's military will, aimed at the protection of the Suwałki breach, a strip of land between Poland and Lithuania, the only access from the EU to the Baltic republics, and interested in possible Russian offensives by the Kaliningrad exclave. (4. Chopin, Heroic). 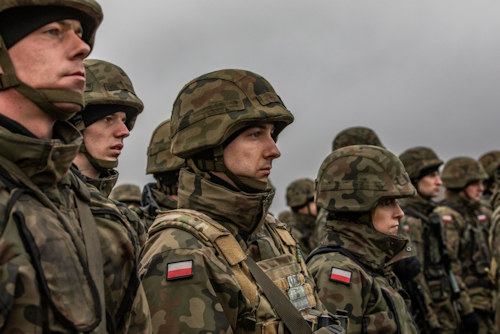 Let's stop now in the country of the White Eagle, Poland. The feeling of national identity, the millenary religious history that places it as a Catholic wedge in the Protestant and Orthodox contexts, the secular vicissitudes lived to be the most sought-after earthenware pot among iron pots in perennial strategic competition, Russia and Germany, the they conditioned with reflections that still reverberate. Poland, internally divided into more progressive areas in the west and more traditionalist ones in the east, is part of the Visegrád group and in 2019 confirmed, in European eyes, a strong spirit sovereignist. Despite the evolution following the passage of time, Poland continues to wear two robes: the uniform of Pilsudski and the cassock of Saint John Paul II. (5. Christobal De Morales - Requiem Sequentia).

National identity is based on several pillars; first of all, the role of guiding nation entrusted by Providence is still alive and which has led, politically, to take decisions assessed as conservative but seen at home as apt to preserve state sovereignty and founding historical and cultural principles, even if sometimes not very similar with the new Corso Vaticano; this is associated with the symbolism represented by the national flag, a sign of unity rediscovered and pride by those who have suffered foreign oppression, which also happens in other countries that host Russian-speaking minorities and who perceive the danger both from the East and from a West that disregards moral and cultural canons that have only recently been regained, and which they want at the basis of a national identification that the Soviets and Nazis sought to eradicate. The Bolshevik-Nazi partitions were accompanied by a ferocious ethnic cleansing: everything that was Polish was "sovietized", mass deportations followed the killings. (6. Chopin Fall of Warsaw). 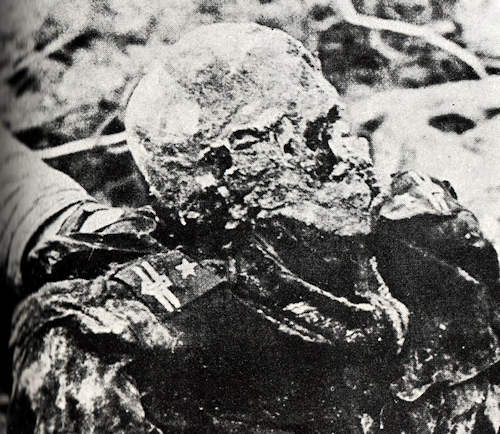 The Kremlin annihilated the upper-middle and educated classes, the elites and their families; the majority of Polish officers (about 22.000) were killed and thrown into mass graves between April and May 1940 in Katyń, a massacre recognized only in 1990. However, the western problem is always the same: the claim to read events according to rigid paradigms that do not take into account the previous history; on the other hand, the Poles should remember that hindering Russian geopolitics on the former satellites will not allow for a joint relationship with the free world, because this will however be conditioned by the geostrategic evolution of international relations. (7. Jan AP Kaczmarek, War and Peace).

The Polish move away from the influence of the Kremlin, the Warsaw co-optation in NATO where for the first time this year Poland assumed command of the joint rapid intervention task force, added to support for the Ukrainian Orange Revolution of 2004, condition relations between the two countries, further eroded by the Smolensk air tragedy of 2010 which saw the death of President Kaczynski, and by the recent false news about the ban on the overflight of a Russian plane destined to deliver medical supplies in Italy; a deimperializzazione Russian Minister Lavrov opposed a ideological disarmament bilateral hardly acceptable because reinterpreting the principle of cuius regio eius religio, would have imposed respect for the will of the Russian elites in terms of political influence. Washington's military political moves, which are supplying advanced war material, are not unrelated to this5 and that it is revealing the Polish wishes to transfer the nuclear warheads stationed in Germany in an anti-Russian key, the riotous ally to which Warsaw is asking for further compensation for war damage. So what to expect from the presidential elections in progress and already postponed on the advice of the Supreme Court? The Duda challenge6-Trzaskowski, regardless of the winner, will not fail to take into account the Polish historical roots, while Europe will have to pay attention not to stamp the results, especially if unwelcome them, from a simplistic and not very careful point of view: Poland, like the whole central European area, cannot be stigmatized with a few strokes of pen.

2 Józef Klemens Piłsudski commander of the Polish armed forces and leader of the Second Republic of Poland, is considered the architect of the regained Polish independence, 123 years after the third partition of Poland.

3 It brings together 12 countries from the Baltic to the Black Sea and which touch the Adriatic, the Three Seas with Croatia and Slovenia. Countries involved: Visegrad group, Baltic States, Bulgaria, Slovenia, Romania, Croatia, Austria

4 Nord Stream 2 together with Nord Stream 1 and Turk Stream embodies part of the Russian energy policy which intends to circumvent the Ukrainian territory, and would allow to transport another 55 billion cubic meters of natural gas to Germany per year.

6 Strongly benefited from belonging to the PiS - Law and Justice.

The images of the terrible explosion in Lebanon have drawn attention to that troubled country. Although from ...
2568
Read

The bitterness in the eyes of the Holy Father for Saint Sophia is only the last slap in the Christian world by the ...
2145
Read

An interesting aspect emerged during the border clashes between Armenia and Azerbaijan, already widely described ...
1782
Read

The Mediterranean has always represented, for Italy, the main line of political attention, even more today ...
3103
Read

Are you convinced that only foreigners bring the coronavirus to a COVID-free Italy? Well, get it out of ...
5859
Read

At least seven ships caught fire in the Iranian port of Bushehr, according to reports from the news agency yesterday ...
2620
Read