The "lemmings" - for the uninitiated - are small arctic rodents that migrate in large groups across the tundra: often the errors of orientation of those in the lead and / or the pressure of other individuals cause the entire group to fall in streams, cliffs, etc. giving the impression of a "collective suicide".

This, as we will see, is the description of what has been happening to Russia since February 24th.

The failure of the blitzkrieg

The Kremlin strategists had a very specific plan for the first 24 hours:

As you well know, apart from the de-mining of some roads along the borders, everything went wrong for the Russians: Ineffectiveness of the attacks from the air, slow ground transportation, gross errors in communications, completely wrong planning, etc. Thus, Minister Shoigu disappeared from the spotlight and became missing person Joint Chief of Staff Valery Gerasimov, while effective control passed into the hands of the Kremlin.

The failure of the barbarian war 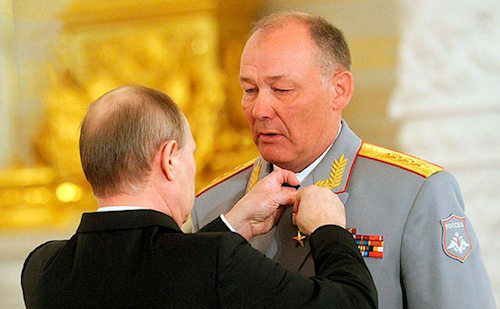 Thus began a new phase of the war, which lasted roughly from February 27, when Shoigu and Gerasimov were forced to listen with wide eyes to Putin himself threatening the use of nuclear weapons, until April 9, when Dvornikov (photo) was appointed sole coordinator of the so-called "special military operation". It was a story already seen in Grozni and Aleppo, whenever Russia's battalion tactical groups went into crisis in the face of urban warfare. We can summarize this phase by following its development on the very long front, from Odessa to Kiev, more than 2.000 kilometers against which the Kremlin has hurled about 200.000 men.

On the southern front, extended as far as the whole of Northern Italy - from Odessa to the Zaporizia oblast -, after the rapid march from the Crimea towards Kherson, Melitopol and Enerhodar in the first two weeks, the advance of the Russian forces was abruptly stopped, for a series of reasons, which can be summarized in three main ones: crisis of the supply chain and supply chain, civil and clandestine resistance of the local population and structural limits of the Russian forces deployed. Only the naval blockade was carried out successfully, without ever managing to worry the Ukrainians with the concrete danger of a landing: the attack on Berdiansk raised serious doubts about the naval warfare instrument and the Russian control of the skies. Generals have often handled their little portion in front of them like gods warlords quarrelsome and uncoordinated. The civilian population suffered kidnappings, violence and threats, but never gave up, often - as in Energodar - physically intervening between the Russian attackers and their targets.

On the Don basin front, the Russians managed to penetrate Mariupol, but never really controlled the territory around and within the city, while on the Luhans'k and Donetsk side the militias of the self-proclaimed people's republics continued to confronting the best forces in Kiev as of eight years now, without significant territorial gains. In the Mariupol area, Russia most likely had a third of the losses suffered during the entire war, with a mortality among the leaders of the armed forces unmatched in modern and contemporary history of Europe. Having gutted the city of Mary causing enormous civilian casualties did not bring victory closer, but it did demonstrate to the world the extreme brutality and contempt for human life of Russian political and military leaders.

On the north-eastern front, between Kharkiv and Sumy, the Russians only occasionally managed to penetrate the cities, always being pushed back. After less than a month of war, Moscow's troops had to withdraw from this front after useless and costly attempts to persuade the local populations - we remember: mostly Russian-speaking - to surrender and be "denazified".

On the northern front, between Chernihiv and Kiev, the Russians have gone from disaster to disaster, easily annihilating their best forces and transforming themselves from self-styled "liberators" into raiders, rapists and torturers who for decades will be hunted down by international justice to demand account of the extermination of 10, perhaps 20% of the populations residing in the inhabited centers they occupied and of the thousands of anti-personnel mines left to hit civilians in the years to come. Having abandoned excellent weapon systems on the field in addition to the evidence of the reign of terror established in centers like Bucha and Irpin seems to be caused more by sloppiness and disorder than by a specific political and communicative intent. The flight from this front and the violence exerted will remain among the greatest shame in Russian military history for centuries to come.

The (next) failure of the patched war plan

The so-called "great offensive" on the eastern and central-eastern fronts started off on the wrong foot: the sinking of the Moskva and the attack on the command center on the Kherson front are signs of a crisis in the Russian military instrument that will certainly not be repaired. from the appointment of General Dornikov as sole commander. What many commentators refer to as Aleppo's "executioner" has imposed some changes:

Well, like poorly placed pillboxes, these objectives cannot be achieved for the reasons that we explain in a nutshell:

We also add that in this phase Moscow also encounters enormous difficulties in managing the flows of local Ukrainian populations:

For this reason, we dare to predict that towards the end of May, once 10-20% of the men and means deployed for this new "great offensive" have been lost, the Kremlin will decide to move to a new phase, also because in that moment will arise the question of the accession of Sweden and Finland to NATO.

The leap of the lemming: the challenge to NATO

Let's start with a fact: until 23 February, Finnish public opinion was opposed to joining NATO, which is now viewed with extreme favor by the majority of citizens. So, now as in the past, the errors (and in the case of Mariupol, the horrors) of Moscow have determined what for the Kremlin is the attempt by Westerners to suffocate Russia: also in light of the recent threats made by Putin and from other members of the Russian establishment, it is difficult to see why Russia should not take action. Poland, the Baltics, Finland, Slovakia, Czechia and Sweden: only Turkey is missing to have the complete list of the countries of north-eastern and southern Europe with which Moscow has had unfinished business for centuries and which perceive Russia as a potential danger.

We talked about suspicions, open accounts and old grudges. Here is how long these countries have not had a warring war with Moscow:

Yes, you may have noticed that it is the list of the European countries most active in helping Ukraine. We believe it probable that the Kremlin, in order to justify a general mobilization, to hinder a new NATO enlargement and to block the influx of arms to the Ukrainian resisters will not hesitate to attack one or more of these countries, thinking that the countries most dependent on the Russian gas - Germany, Italy and Finland itself - will block the application of direct military measures by the entire organization of the Atlantic Pact against Moscow. Here, then we will see the culmination of Operation Lemming: dragged by their leaders and pushed by popular grudges, the Russians will throw themselves headlong into the Great War towards which they have projected up to now and which the Kremlin, goodness, plans to limit how extension, while not at all excluding the use of nuclear weapons.

We are frightened by the fact that to date, like any self-respecting dictator, Putin has lied about everything except threats: he has always done what he threatened to do.

The international situation is evolving rapidly and there is no country that does not have to adapt. In an area of ​​course ...
6555
Read

The visit of the Chinese foreign minister, Wang Yi, who in the second half of May touched several small states ...
1048
Read

The focus of geopolitical attention cannot be fixed; Ukrainian drama aside, Asia continues to stir up more than ...
8756
Read

The vote in the UN Assembly of the motion condemning Russia's aggression against Ukraine has ...
3115
Read

The rise of China as a global economic and geopolitical superpower has heightened tensions and concerns about ...
3271
Read

Last May 23, with a grand ceremony attended by President Recep Tayyip Erdoğan as guest of honor ...
4500
Read

The Ukrainian campaign could prove to be more costly and damaging for Russia than anticipated. Despite a ...
2626
Read