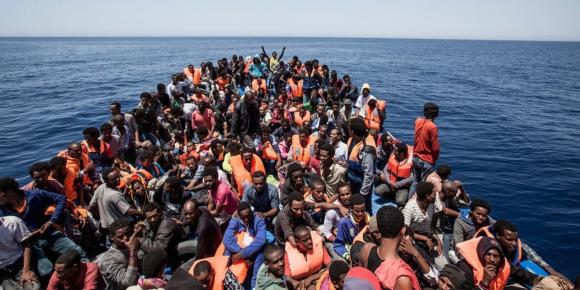 We don't even know how many there are; some say 200.000, some 400.000, others even 600.000. How many economic migrants, refugees, how many refugees. And this is also part of the problem; because some clarity would be required in those who are institutionally responsible for managing the forced migrations of recent months on the continent.

A problem that Europe, unprepared as ever, a simulacrum of an empty container, is facing without any overall vision, torn apart by the Eastern States (Hungary, Bulgaria, Slovenia, Greece) - but also Austria, Denmark, Sweden - intent on curbing, even physically, the Balkan route, and the traditional ones of the old continent, unable to choose between the terror of their own future and the generalized propensity to welcome, subtly served by a certain political culture and by the world Catholic.

The first, third world, has long since replaced the masses of the proletariat with those of the desperate on a perennial journey, with an eye to a possible enlargement of its electoral basin.

The second, more severely challenged even within it, driven by the need to find areas of dialogue and a common space with a confession destined to become, in the medium term, if not the majority, at least the most influential in a secular continent, it seems to search of a difficult balance between teaching and consent.

In this situation, even the media do not help to clarify, repeatedly bombarding public opinions with photos of overcrowded boats and lifeless children returned to our coasts, only to skilfully gloss over the preponderance, in the arriving multitudes, of males in age as a soldier (16 -40 years) - over 75% -, and how some of them can pay up to € 7.000 per trip.

Reference is also made to demographics (aging of the population) to give a positive value to new arrivals, also hinting at the need for someone willing to pay our pensions, to the point of supporting - as in Diamanti on the Republic of February 1st - that "in order not to become extinct, in order not to end up on the margins, we should really close the borders. To the north. To prevent immigrants (... ..) from going elsewhere. And to leave us at home always older. More and more alone (...). "

Legitimate points of view in an open and plural debate of an evolved society like ours.

But there is also another interpretation, which sees the migration phenomenon as something carefully induced to hit Europe within it, irrevocably undermining social cohesion.

Kelly M. Greenhill of Harvard Kennedy School called them "coercive engineered migrations, coercive designed emigrations ”ie "cross-border movements that are deliberately created or manipulated in order to extract political, military and / or economic concessions from one or more targeted states".

An unconventional weapon, instrument of a new (asymmetrical) way of waging war, like the one theorized in the 1995 by two Chinese colonels, Quiao Liang and Wang Xiangsui, in the book "Guerra senza limits" (Libreria Editrice Goriziana, 2001), with the comment of Fabio Mini.

Immigration as a war instrument, which acts in two stages: first by forcing the contender to manage the phenomenon of arrivals immediately, arranging for the relative reception; then forcing him to govern the innumerable internal problems caused by the integration (?) into the social fabric of such a foreign body. All with the ultimate aim of progressively weakening the host.

Immigration as a weapon of a "war without limits" fought with means and strategies different from those of classical conflicts (symmetrical, linear, rational, marked by a Cartesian logic); a war fought (also on European soil) without soldiers, guns and cannons, but with "non-military" tools (economic, social, political, terrorist, financial, information), in order to destabilize the ganglia of the state organization.

A war that sees refugees not as a consequence of the conflict, but the conflict itself, as recently written by an American scholar: "The nature of war has changed; refugees today is war".

Interpreting the phenomena we are experiencing in this light may not be politically correct, but it would help - I believe - to make us less vulnerable.

Mario Draghi spoke of Turkey as Italy's main trading partner in the region that includes the Middle ...
675
Read

The Mediterranean once again lends itself to being the ideal backdrop for those wishing to shift attention from Ukraine; ...
2184
Read

As was widely expected, during the Summit of NATO Heads of State and Government in Madrid, Finland and Sweden ...
4207
Read

The international situation is evolving rapidly and there is no country that does not have to adapt. In an area of ​​course ...
8432
Read