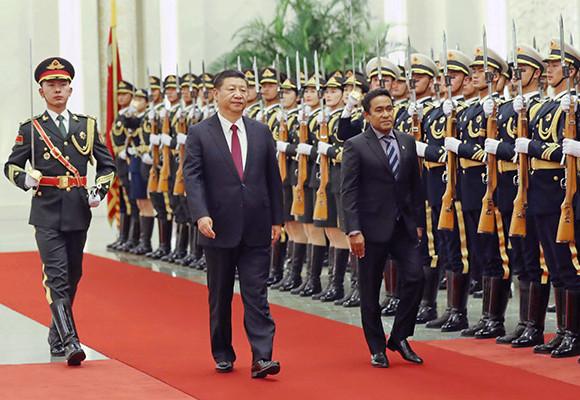 At a time when Ukrainian landscapes populate scenes that are a prelude to even more tragic and unpredictable developments, it may seem incongruous to imagine the warm Maldivian sands, however threatened by rising tides and housing needs that forced the construction of the artificial island of Hulhumalé . After all, paraphrasing an old adage, if there is no peace among the olive trees why should there be among the palm trees?

In the ocean blue of 1.190 islands, a playful prerogative for a select few, stands (big word) the smallest Asian country both by extension and by population, the latter concentrated above all in Malé, one of the most densely populated cities in the world, where stands out the China-Maldives Friendship Bridge, worth no less than 200 million dollars largely financed by Beijing, a very expensive bridge already predicted since 2008 by President Maumoon Abdul Gayoom and subsequently built by his stepbrother Abdulla Yameen, whose rise has favored both the opening of the embassy Chinese in 2014 and the visit of President Xi Jinping, testifying to the Maldivian relevance in the context of the BRI, announced by Xi Jinping in 2013 during a speech to students of Nazarbayev University in Astana, Kazakhstan.

Moreover, if after 45 theopportune necessity of a Marshall Plan with which to obtain full political and cultural control, today it is necessary to create an adequate logistic structure; if the Marshall Plan was born with the aim of creating future generations of buyers, the BRI embodies a project aimed at controlling, in a monitorable area, all the States that will have a large middle class in the near future, according to an expansion that consider the overall economies of scale. Not surprisingly, as reported by the Financial Times, the EU and India intend to give substance and continuity to a joint global investment project, conceived in antagonism with the New Silk Road. 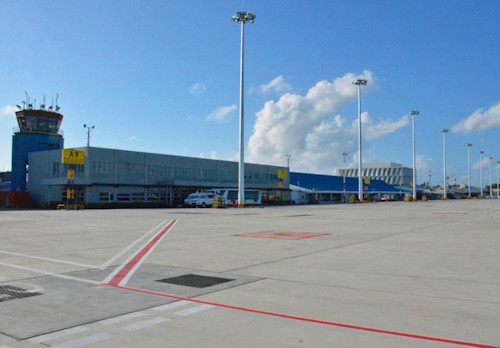 The Chinese expansion in the Maldives, which allowed the expansion of the local airport for the modest sum of 800 million USD, has shaken neighboring India which, fearing losing control of an area traditionally considered in its sphere of influence, has engaged in fierce infrastructural competition; from the Himalayan peaks only for soldiers, to the beaches only for a select few, the step of the dispute was very short.

Under the leadership of former President Abdulla Yameen, in power since 2013, and whose political departure Malè rejoined the Commonwealth, the Maldives opted for a rapprochement with Beijing which, while donating hundreds of millions of dollars for the development of he archipelago, did not consider the alternating fortunes of elective politics. What is certain is that, if on the one hand the decline of Yameen, replaced by Solih, has allowed the political rapprochement with India, on the other hand it has left a debt to Beijing oscillating between 1,5 and 3 on the table.1 billions of dollars, also consisting of the repayment of sovereign guarantees granted to private individuals; an amount, however, aleatory, given the difficulties encountered even in its quantification. However, the fact remains that, according to the Observer Research Foundation, a New Delhi think tank, the Maldives are still fundamental for India which, unlike Beijing, is however encountering difficulties in controlling the security aspects of a complex area. in which Hymala events echo.

However, the spatial and demographic dimensions of the Maldives should not be misleading, given their extension over a strategically significant portion of waters. According to some estimates, half of India's foreign trade, including 80% of its energy imports, passes along routes adjacent to the Maldives; the same Chinese imports of crude oil from MO and Africa - about 62% of total imports - exploit these routes.

Yameen's rise to power in 2013 after a controversial election saw the Maldivian move away from Delhi, opting for a courtship of the Dragon's investments in the context of the BRI, which made Male a prominent link on the Maritime Silk Road2. The political events of Yameen, the president who surrounded Parliament and the Supreme Court by the security forces, first convicted of money laundering and corruption, then finally cleared and returned to the political arena, are intertwined with the pandemic consequences that, blocking tourism, have put a strain on the Maldivian economy, with a GDP contraction of no less than 19,5%, and with an IMF estimate that the Maldives remain at high risk of debt distress, coincidentally turned on to China. 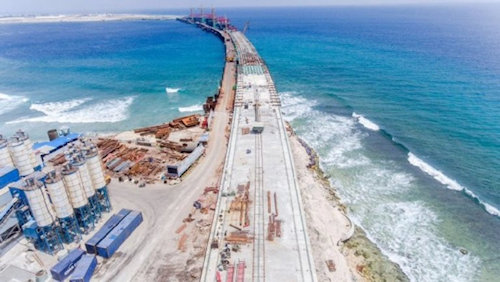 In the face of attempts to renegotiate the debt, the debts contracted by the companies under state guarantee still remain alive, which leads to fears of a possible sovereign default which, already at the level of fear, has triggered the need to resume political and financial contacts with New Delhi, which has planned financing and subsidized loans3 ad hoc to support the Greater Malé Connectivity Project4, which is associated with a new bridge connecting Malé and other islands in the area, almost 7 km long and even more expensive than the Chinese one (500 million usd).

In this context, the pandemic contraction of Indian GDP, an aspect which is of importance to Indian internal political assessment; it should also be remembered the different conceptualization of transparency in tenders, replaced by an accentuated nebulosity when instructed by China which leaves no say to the Maldivians and which certainly does not intend to give up.

In a financial sense, given the size of the debit / credit items, it can be said that the soul of the Maldives is divided in two. And even more, since Malè is approaching countries like the USA and Japan5.

Maldivian Eden is between the Indian anvil and the Chinese hammer, where the Dragon is seen by New Delhi as a systemic and existential antagonist comparable to Pakistan, and where containment plays an essential role in not being cut off from SLOC which, coming from China, they influence Indian imports thanks to strings of pearls wisely arranged. Maldives, Seychelles and Mauritius, especially in the imagination of those who can only afford an umbrella and a cabin sandwich (when it is good), are in fact in heavenly concentric skies; yet, they host as many as 32 facilities enabled for radar surveillance managed by the Indian FA.

It won't be a new one string of pearls, however it could be interpreted as a partial ocean compensation that has its relevance in function of both the border contrasts in Kashmir in the Hotan county of the Xinjiang region claimed by India, and in the Arunachal Pradesh claimed by China, and in the difficulty that New Delhi could create in the management of 5G on its territory, such as to justify economic sanctions by Beijing. 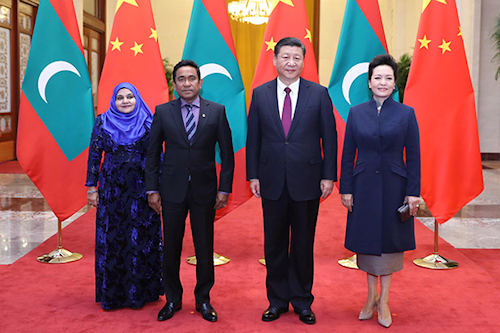 How does China stand in the dispute with India? Invoking a difficult non-interference with variable geometry that former president Nasheed has stigmatized as the antechamber of chaos, in which the USA first, and then India, with his vision of SAGAR, would enter with an ordering role6.

Washington, after an initial interest of the current administration directed towards Afghanistan, India and Pakistan, has taken care of shared interests and attention towards Malè, which continues to be perceived as a tourist paradise, a critical point of climate vulnerabilities, attraction of international terrorism, pole of clash of Sino-Indian rivalries.

Are the problems only in Male? It does not seem, given the protests staged last November in Honiara, the capital of the Solomon Islands, motivated by economic difficulties and popular conviction of the sale of the country to Chinese interests; the demonstrators, coming from the island of Malaita, the most populous, accused Prime Minister Manasseh Sogavare of having received bribes to disadvantage Taipei in favor of Beijing. In short, a film already seen, with popular anger concentrated in the Chinatown neighborhood.

Let's start from the center of the pond: Malè, more or less conscious interpreter of the desires of several powers, is a nodal point of passage, but it is above all the symbol of a clash of wills which, unfortunately Ukraine teaches, does not necessarily lead to openness. conflict.

Who can guarantee a Chinese non-intervention in the face of hypothetical Indian operations on Maldivian territory? None, given that Beijing has also shown understanding for the Ukrainian invasion which, in defiance of the law, it could justify even in Taiwan the pretentious affirmation of the search for a strategic depth capable of guaranteeing safety.

In the Maldives, currently, an escalation does not suit anyone, and this is the only valid point of a scenario that, despite golden beaches and tanned VIPs, shows a worrying cold war instability.

1 Amount estimated by former President Nasheed, leader of the Democratic Party; an amount equal to more than half of Maldivian GDP, and disputed by Chinese officials

2 In 2016, China actually acquired the port of Piraeus which 67% is owned by Cosco Shipping, directly controlled by the Chinese government. Even in Italy, where the ports are managed by non-economic public bodies, China has nonetheless invested through the companies that manage the ports.

4 New Delhi has planned the construction of a new cancer hospital, a cricket stadium, a port, also starting the training of Maldivian civil servants, and implementing the services of merchant ships.

5 To remember the Free and Open Indo-Pacific Strategy (Foip), a project curated by the USA and Japan to counter the BRI

6 Security and growth for everyone in the region

As was widely expected, during the Summit of NATO Heads of State and Government in Madrid, Finland and Sweden ...
4082
Read

The international situation is evolving rapidly and there is no country that does not have to adapt. In an area of ​​course ...
8379
Read