Home geopolitics Analysis LIBYA: Sarraj resigns? Why is it not pos ... 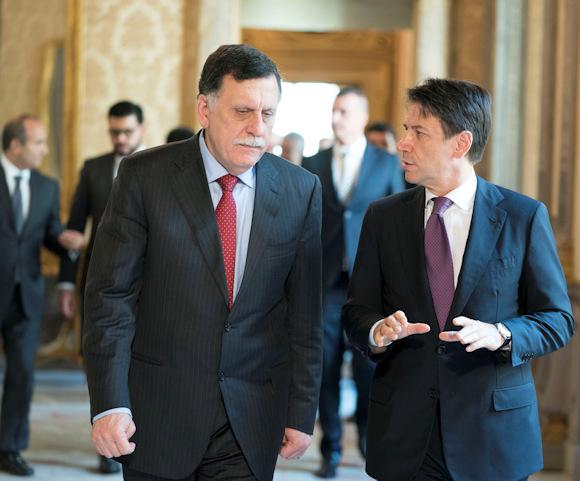 Second Bloomberg Tripoli Prime Minister Fayez al-Sarraj would be ready to resign shortly or, in any case, by October, that is, before the start of peace negotiations in Geneva. News promptly denied by the GNA Labor Minister Mahdi al-Amin on the Kremlin newspaper Sputnik. In short, there is a very close confrontation at the political-media level on the future of Libya and this time, after the resignation of the Tobruk executive, it would be up to Sarraj to leave the field to facilitate negotiations.

But Sarraj will not be able to resign "without a shot being fired" and will be forced to take advantage of these months to stabilize the situation in the capital since the success of the peace process passes from the Tripoli-Misano consensus, much more than the actions of the rebel marshal Khalifa Haftar.

First of all, because Prime Minister al-Sarraj cannot leave Tripoli a power vacuum which his many opponents could immediately take advantage of, especially now that contacts with representatives of Cyrenaica seem to lead to positive solutions to the conflict.

In Tripoli, Fayez al-Sarraj does not enjoy a calm situation, the ouster and reinstatement of Interior Minister Fathi Bashagha (v.articolo) left aftermath because the operation had a complicated game of parts, a sort of Divide and conquer in Libyan sauce carried out against the militias of Misrata and with the ambiguous conduct of important "warlords" of the capital. Over the last period, the Libyan prime minister has tried to free himself from the political-military circles of Tripoli by "internationalizing" again the list of his supporters and thus relying on the United States - which has returned forcefully to the field - and, feebly, also to Italy. Seeking the support of its historical international partners can be useful for al-Sarraj to have a wider margin of maneuver and facilitate the transition towards the birth of the new Presidential Council wanted in 2015 in Skhirat and never really entered into function for the opposition both Tripoli and Tobruk.

Entrusting executive power to a collegial body, with representatives of both sides, is the only way to favor the "political solution" of the conflict and guarantee the unity of the country. Just what the "hawks" both Tripoli and Cyrenaics would like to avoid in order to maintain their remnants of power. Absurdly it was precisely the hard line that opened the doors to negotiations as the Turkish-Tripolina offensive made it possible to militarily obtain the liberation of Tripolitania and politically the detachment of Aguila Saleh Issa (and the now former Cyrenaic government) from Khalifa Haftar. The political isolation in which Haftar struggles today - who tried to exploit the crisis caused by the resignation of Abdullah al-Thani in his favor - is determined by the success of the Bouznika talks (v.articolo). Not to mention that even important international actors in the Libyan crisis have chosen to follow a different path from that of the Cyrenaic marshal: Egypt above all looks favorably on the negotiations and this also explains why many of the tribes of Cyrenaica - closely linked with the Cairo - abandoned Haftar and ended up supporting (albeit with weapons ready) the "political solution" sponsored by Saleh. The United Arab Emirates also seem more attentive to the moves of the Cyrenaic "doves" than to those of the "hawks" since the risk of a complete "turchification" of Libya seems to have now faded in the face of the positive results of the preliminary talks.

Certainly the resignation of Sarraj, the man who "managed" the war and played - despite his government being recognized by the UN - essentially the role of the leader, would allow the parties to speed up the recomposition of Libyan unity and therefore on the start of the peace process. But it is also true that at present the prime minister cannot leave Tripoli hostage to a gang war that would inevitably spill into the streets from the palace, condemning the negotiations with Cyrenaica to failure.

Currently, Sarraj's remaining in power, at least until the start of the Geneva negotiations, is the best guarantee for the interests of Libya and also for those of the states that focus on safeguarding national unity (like Italy precisely) and not on the dismemberment of the country. There will remain the unknown as to the real possibilities of Fayez al-Sarraj to "fix" the political situation in Tripoli and weaken the militias by and no later than October so as to be able to arrive in Geneva from a position of strength.

Photo: presidency of the ministers' rabbit

As was widely expected, during the Summit of NATO Heads of State and Government in Madrid, Finland and Sweden ...
2505
Read

The rise of China as a global economic and geopolitical superpower has heightened tensions and concerns about ...
3325
Read

Last May 23, with a grand ceremony attended by President Recep Tayyip Erdoğan as guest of honor ...
4569
Read