Home geopolitics Analysis The uncertainties of an immature empire 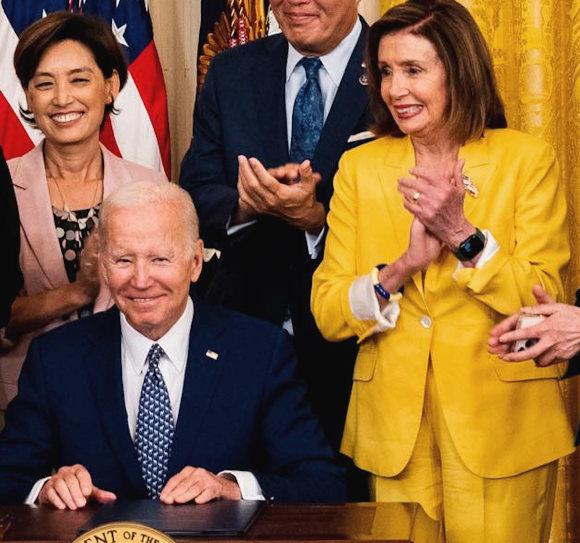 Without prejudice to the fact that international relations, by their very nature, cannot experience moments of stasis, there is no doubt that what is now manifesting highlights an exceptional dynamism. It is progress, with strengths and weaknesses; it is globalization, it is the multipolarity that has broken the never too regretted equilibrium of Le Carrè, it is a romanticismo whose fascination with the likeness of the Strangelove Peter Sellers.

While the storm continues to hit Ukraine with implications that leave us astonished and that lead us to believe that the human being has basically remained a Neanderthal to beware of fear, the East is ignited by the sparks triggered by a West that continues to not be aware of how he played his cards badly and recklessly.

The facts. The speaker of the Congress, Nancy Pelosi, has planned a trip to Asia, with dates to be confirmed, which includes a stop in Taiwan in August, already a hot month of hers. Beijing's reaction was not long in coming, and she anticipated resolute and strong measures, suggesting the imminence of a new crisis.

Zhao Lijiang, spokesman for the foreign ministry, and Tan Kefei spokesperson for the ministry of defense, for the occasion, underlined a foregone political line, noting that the diplomatic performance (?) Of Pelosi would significantly erode China's sovereignty and territorial integrity, impacting on the already shaky relationship with the United States, giving a misleading signal to the Taiwanese forces aimed at consolidating and above all at recognizing Taipei's independence.

The warning from Beijing should not be underestimated, which did not exclude further interventions in the current complicated liaison between the People's Republic and rebels of nationalist China. Moreover, it is certainly no mystery that the communist management has always considered Taiwan an integral part of mainland China, so much so that, in order to achieve reunification, considerable military pressures, evoking, as a last resort, at the time of the ascertained uselessness of diplomatic attempts , the use of force.

On the other hand, Washington, which has updated commitments and aid in support of Taipei, but which has never openly renounced its own strategic ambiguity founded on the political assumption of One China and on the clauses of the three joint China-US declarations.

If Russia represents the immediate risk, Beijing is the planetary and long-term one; the political posture towards China is informing all American foreign policy: President Biden's recent Middle Eastern trip set out, among the most important purposes, to stem Chinese expansion among the Arab countries.

How serious are the Chinese threats? Not a little, and in any case they are not underestimated. According to the Financial Times, Jake Sullivan, national security adviser, opposes Pelosi's trip due to the risk of an escalation in the Taiwan Strait; interesting in this regard the evaluation made by the International Institute for Strategic Studies, for which ..in the short and medium term, a conflict in Taiwan is much more likely to occur by chance than by will. One hypothesis to consider is that Beijing, baseless, is certain that Washington is coordinating the visit to Taiwan because Potus e Speaker they are both dem, without mentioning that Congress is independent and that Biden cannot ban travel, although the Pentagon considers the initiative counterproductive, because it is seen only as a dangerous support for independentism, and despite Biden having qualified the moment chosen for the visit as definitely wrong.

Meanwhile, Xi may be tempted by the opening of an external front to induce the Chinese not to dwell on the country's difficulties, aimed at the economic slowdown1, on the substantial failure of the Zero Covid policy, on the real estate crisis, where every point of growth less leads to a million more unemployed, on the difficulties represented by the relationship with the Kremlin.

Aware of the fragility of the health system, Xi tries to preserve hospitals from Covid hospitalization, confining millions of people for (relatively) few infections. Social stability is at risk, and public opinion is exhausted: thousands of little petty bourgeois they are boycotting the payment of mortgages on apartments not yet completed due to the lack of credit that is gripping the builders; thousands of savers reclaim their frozen money from distressed banks; in some areas i dabai2, the health workers who manage the Covid Zero policy on the street are striking for the non-payment of wages.

So why the current high voltage? Probably because Xi is preparing to reach Beidaihe, the seaside town where i red principles they hold their annual meetings, during which the work of the government, the Politburo and the Secretary General is judged. If Xi wants his five-year term to be renewed in the fall, he has to prove that he hasn't undergone the American initiative; a humiliation would weaken his position on the eve of the XNUMXth Party Congress.

Moreover, the tension is not limited only to Beijing, but involves the whole region around Taiwan where there is preparation for the conflict, while Japan is convinced that armed confrontation is only a matter of time. If until recently it was believed that China was unlikely to trigger an escalation, it is now believed that Beijing could strongly respond to what it sees as threats to its sovereignty.

Several analysts believe that, although Xi will try to avoid any pre-congressional problems, he would almost certainly respond with weapons in the event of a crisis, since he still has to guard against friendly fire.

What does justice to the seriousness of the picture is in fact the negative evaluation carried out by the Pentagon itself which foresees an aggressive response to a visit which, moreover, creates further chaos in a context made ambiguous by American foreign policy, even in this often decomposed quadrant.

Washington since 1972 recognizes the principle of the politics of one China, but without forgetting, since 1979, the simultaneous recognition of the People's Republic, however accompanied by the Taiwan Relations Act, which preserves relations with Taipei, to reach a resolution in 1982 Six Assurances, with which the US would not have recognized Chinese sovereignty over Taiwan.

In 2021, Washington claimed to have agreed with Beijing to respect the principle one China, without officially recognizing Taiwan. The modernization and expansion of the Chinese military then prompted Taipei to seek support from its American ally.

If it is true that Biden claimed that the US would defend Taiwan, it is equally true that the intent of Nancy Pelosi led to a rift between Congress and the White House on the one hand, and the Pentagon on the other, with Pelosi minimizing, he said that, as far as independence is concerned, it is up to the Taiwanese alone to decide (as if it were easy). In short, declarations and decisions lead to a hide-and-seek that varies the status quo from time to time, according to a paradigm that sees the credibility of the two contenders diminish, in particular that of Washington, still mindful of the Afghan debacle. What is certain is that former Secretary of State Mike Pompeo has stated that would be delighted to accompany the speaker, decidedly strong claims for a more than potential competitor in the next race for the White House in 2024.

Amidst (disastrous) Arab springs and political ambiguities in various capacities, America must now decide what it wants to do when I grow up nevertheless carefully calculating the consequences of his moves, remembering that being empire involves specific responsibilities.

If Biden or General Milley succeed in dissuading Pelosi from her trip, they will fuel two beliefs: political fragility ed little motivation in defending Taiwan; obviously, the opposite solution would lead to a tightening of tone, with the possible opening of a crisis parallel to the Ukrainian one.

Taking into account that the phone call of July 28 between the two heads of state did not lead to anything, one cannot fail to notice a political fracture within the US reality, and a wider fault that goes beyond national borders and that sees the US and China trapped in a game viscous, which cannot fail to take into account either the projections on the mid-term elections, or the impossibility of reaching a symbolic solution that saves the face of both actors. In short, to say that il Pentagon is against, it was an unforgivable lightness; this time the American president would have done better to keep quiet, keeping a credible poker face, and convincing the speaker not to leave.

What could happen if a Chinese reaction prevented the landing of American planes in Taiwan? Hopefully reach no more than the recall of the American ambassador and no more than a package of economic sanctions. The hypothesis of casus belli, although looming, it would transform the Indo Pacific into a bedlam, with China launched to the very rapid conquest of Taiwan.

Conclusion: considering that the common sense was there but it was concealed for fear of common sense3, the fears of the American president and the political debate in Washington testify to an identity crisis of the US empire.

Between the second half of July and the beginning of August over thirty people died (including two soldiers ...
821
Read