Home geopolitics Analysis The Morocco-Israel axis and the drone war 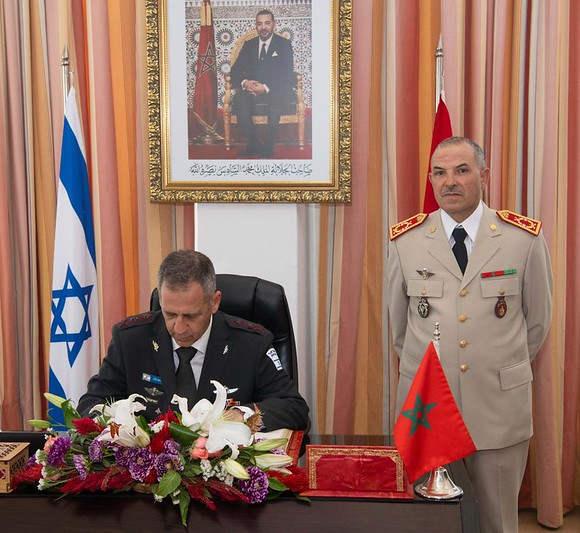 “Over the past year and a half, Moroccan-Israeli ties have broadened, encompassing strong military and security cooperation yielding promising trade opportunities. Since signing the normalization deal, brokered by the Trump administration in 2020, the two countries have it has signed over thirty agreements and memoranda concerning the sectors of defence, commerce and agriculture.Military cooperation is certainly the most intense.

The deep interactions resulting from the agreement produce mutual benefits: Morocco has direct access to Middle Eastern defense technologies and Israel is confident of a growing acceptance and presence in North Africa. The Israelis provide an important advantage to the Moroccan military, which is eager to improve its capabilities through access to the latter's technology, particularly regarding UAVs (remotely piloted aircraft, ed.). Morocco increasingly sees military cooperation with Israel as a potential deterrent to aggression by the Polisario Front (and, to a lesser extent, Algeria). However, this position and his recent arms-buying rush are exacerbating diplomatic tensions with Algiers.

In the field of defence, in the last year alone, there have been two important meetings between military representatives of the two countries. The first was in November last year when the respective defense ministers signed a memorandum of understanding which provided for the purchase of armaments, information security technologies and planning of joint military exercises. Between July and September of this year, however, there was an exchange of visits between General Belkhir el-Farouk, general inspector of the royal armed forces of Morocco (Forces Armées royals, FAR), and the Chief of Staff of the Israel Defense Forces (IDF), Aviv Kochavi. The first in July in Morocco, the second at the event, nicknamed Operational Innovation organized by the Israel Defense Forces which was held in Tel Aviv from 12 to 15 September.1

Commercial and economic collaboration is also extensive and includes investments in the field of renewable energy and in the management of Moroccan waters, while private Israeli companies are increasing their investments in Morocco. Strategically, for the North African country, this facilitates recognition by the United States of its claims to Western Sahara (see article: "Morocco vs Western Sahara, a continuous and never ending war") and a strengthening of relations also with the European Union as well as favoring an imbalance towards it of the military influence towards Algeria.

The partnership offers clear benefits to both parties. They can be summed up with easier access to Israeli military and intelligence technologies by Morocco while Israel would gain greater acceptance among Arab states and considerable influence in North Africa.

The Palestinian question remains thorny. Morocco supports an agreement between the parties but has always tried to keep its distance in the dispute while Israel with this and other partnerships, without resolving the Palestinian question, is obtaining not only "peace" with the Arab countries but also intense trade relations and security with them. The results of the last Israeli elections and the continued shift to the right could weaken this partnership but the volume of investments is such that cooperation is unlikely to be limited.

Shortly after the signing of the normalization agreement, in July 2021, Israeli airlines introduced the first direct commercial flight from Marrakech to Tel Aviv. An agreement was also reached in August this year to reopen the Israeli embassy in Rabat to enhance cooperation in the fields of trade and defense. The agreements also provide for the export of Moroccan labor to Israel, especially in the building sector2.

Since its independence (1956) Morocco has fought two historic adversaries such as the Polisario Front and Algeria. The heated rivalry with Algiers still continues and also characterizes the foreign policy of both countries. The dispute between Morocco, Algeria, Mauritania, Spain and the Polisario Front over who has the legitimate right to control the territory of Western Sahara has led to an expansion of the Moroccan army and its modernization. However, today, the greatest concern for Morocco comes from neighboring Algeria.

Press agencies report that Algiers has contacted the North Industries Group Corporation Limited (Norinco) for the purchase of the short-range ballistic missile launcher SY-400 (SRBM). This would complete the ballistic missile system Iskander E (made in Russia) and missiles YJ-12B of Chinese manufacture. This will significantly strengthen its regional position in the volatile Middle East and North Africa region. On the other hand, tensions between Algeria and Morocco have increased significantly in recent times, mainly due to the intensification of the activities of various guerrilla groups on the tripoint between Algeria, Morocco and Western Sahara. Morocco, for its part, wants to compete in security and defense by focusing on the effectiveness and sophistication of its army.

We recall that the per capita military expenditures of Morocco and Algeria are respectively the fourth and second in the world3.

Algeria is the largest buyer of Russian arms while Morocco cultivates an advanced cooperation relationship with American military institutions and has a long history of acquisition and interoperability with the US, British armed forces (see article "British drills and 'wildcat'") and French.

Although Morocco has, as just mentioned, intense collaborative military relations with the United States and the EU, Israel offers a further opportunity to improve its capabilities. Morocco's access to Israeli technology such as UAVs allows it to take a leap forward in building up its military. Rabat is expected to acquire five different types of drones: Heron, Hermes 900, WanderB, ThunderB, e Harfang. Since the normalization treaty, Morocco has bought a batch of drones Harop (known as kamikaze drones, they can fly for up to nine hours, carry 20 kg of explosives and reach a top speed of 225 knots) for $22 million in 2021. Morocco is reported to have also acquired the Wing Loong I (Chinese), the Bayraktar TB2 (Turkish), theMQ-A1 Predator andMQ-9B Sea Guardian (American).4 Experts say that the latter, when used together with TB2 acquired by Turkey, would help the Moroccan military outpace Algeria's S-300 and potentially its S-400.

Morocco bought Israel's anti-drone system last year Skylock Dome capable of identifying and neutralizing drones.5 In February, however, he agreed with theIsrael Aerospace Industries (IAI) for the air and missile defense system Barak MX for 500 million dollars. The Barak MX is a flexible and modular missile defense system that protects soldiers from enemy fighters, cruise missiles, ballistic missiles, drones and helicopters. The system offers three types of interceptors: the Barak-MRAD, which intercepts missiles up to 35 kilometers; the Barak-LRAD, which can reach targets up to 70 kilometers away; and the Barak-ER, with an extended range of 150 kilometers.6

The military cooperation agreement with Israel also includes a plan for the construction of two UAV factories in Morocco, in the Al-Aoula region, for the production of drones Harop which would be labeled as being of Moroccan manufacture.

Morocco, with increasingly growing relations with Israel, aims to strengthen its influence in the North African region, in particular with respect to that of Algeria and this intersects with Algiers' will to effectively counter Rabat's ambitions in the Western Sahara as well as that of greater political weight in Africa but not only.

This generates diplomatic tensions between two super armed states. Since August 2021, i.e. since diplomatic ties broke down, mutual hostility, popular support galvanized by a constant policy of rhetoric based on the expansion of one's armaments, the dispute in Western Sahara as well as the aspirations of continental leadership have not left bode well for the near future.

The signing of the Agreements of Abraham on the part of Morocco, has seen its initial goals broaden, namely that of guaranteeing US support on the Western Sahara issue and strong cooperation with Israel. As previously anticipated, a search for affirmation in the North African region is evident and this can pass through its alignment with the Israel-US axis against Iran.

The Algerian-Moroccan competition is increasingly expanding also in the Sahel where the United States and the EU have more or less declared interests. We'll see...

Latin America is seething. This is a dramatic fact that is there for all to see. From Mexico to...
1608
Read

The news is blood curdling for its long-term implications, however you can bet…
2834
Read

While the attention of the whole world is focused on the evolution of the Russo-Ukrainian War, in the lands of the Caucasus there is…
2154
Read

In the last weeks of 2022, the consolidation of the "stratified" Russian defensive line east of the Dnieper River and...
6551
Read

One of the most compelling Disney stories of recent years is the one entitled The world to come; read it, it's worth...
5124
Read

“The Western Balkans must decide which side to take: on the side of democracy, this is the European Union,...
7740
Read