Turkey reaffirms its hegemony in Libya and in the Mediterranean 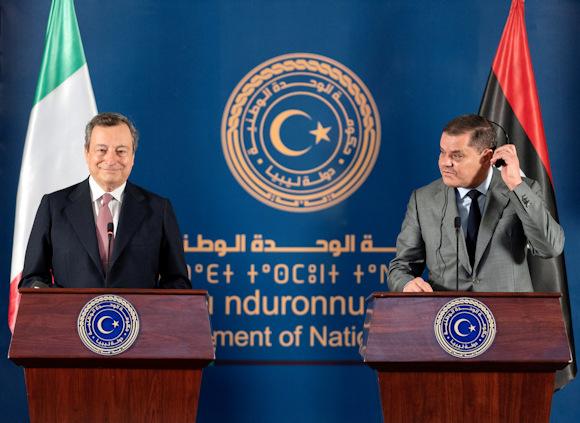 Despite President Draghi's recent trip to Libya, Turkey continues to be the main ally of Tripoli's new (provisional?) Government.

In November 2019, after signing a memorandum of understanding with the then Prime Minister al-Sarraj on the exploitation of Libyan EEZs, Turkey sent weapons, military advisers and above all "Syrian" fighters, recruited by pro-Turkish rebel groups to Tripoli who had fought in the civil war. This allowed the pro-GNA militias to take the initiative against Haftar's ANL, which had besieged the capital. The front subsequently stabilized on the al-Jufrah line.

Diplomatic negotiations - set up to prevent Ankara-backed militiamen from entering Cyrenaica and therefore getting too close to the Egyptian border - led to a ceasefire, signed in October 2020. However, the truce did not lead to the departure of the foreign fighters, as stipulated in the agreement. Then, under the aegis of the United Nations, a process of political transition was initiated in Tripolitania which allowed the formation of a single government, led by Abdelhamid Dbeibeh (the GNA and the Tobruk authorities have finally vanished).

Now it is a question of organizing elections by December 2021, but it is not taken for granted that they must happen.

Since the Dbeibeh government took office in March, several countries, such as Egypt, Malta and France, have announced plans to reopen their embassies. 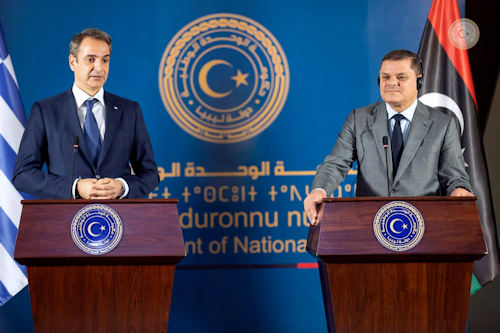 The Libyan capital, in fact, has never stopped welcoming foreign ministers and officials. On 25 March, the heads of French, German and Italian diplomacy went to Tripoli to meet the new authorities and express their support for the political process underway. The President of the European Council, Charles Michel, also made the journey to demonstrate the Union's support for the new government. Then on April 6, the Greek and Italian prime ministers, Kyriakos Mitsotakis and Mario Draghi, also went there.

For the head of the Greek executive, the issue to be addressed with the new government concerned the memorandum of understanding on maritime borders signed by Ankara and the former GNA in November 2019. "This new step in our relations will allow us to correct and erase the mistakes made during the previous phase", Prime Minister Mitsotakis said, asking "The cancellation of illegal documents presented as agreements between states when they have no legal value".

In the sea space that separates Turkey from Libya, in fact, there are the Greek and Cypriot territorial waters which would hide important natural gas fields and where the gas pipeline will be built. EastMed, which will involve Greece, the Republic of Cyprus, Israel and Italy. Hence the legal questioning of the Memorandum of Understanding in question, on which Ankara relies to justify its drilling in the Eastern Mediterranean, on the basis that it "violates the sovereign rights of third States" and that "it does not comply with the law of the sea ".

In response to Mitsotakis, Libyan Prime Minister Dbeibeh said he understood "the importance of any agreement that can bring adequate solutions while preserving the rights of Libya, Greece and Turkey". He further added: "We are ready to set up joint commissions with Greece to resume discussions on the delimitation of maritime borders and to define the exclusive economic zone for each country between Crete and Libya". 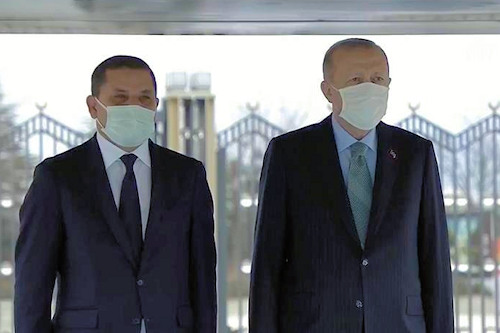 Less than a week after these statements, Dbeibeh - close to Turkish economic circles - went to Ankara, at the head of a large delegation, to meet the Turkish president.

"As regards the agreements signed between our countries, in particular the one relating to maritime boundaries, we reiterate that they are based on legally valid bases and serve the interests of our two countries", declared Libyan Prime Minister Dbeibeh, alongside President Erdoğan. "Today we have renewed our determination" on this agreement, the latter confirmed.

"We want to strengthen our solidarity and cooperation […] We will support the government of national unity in the same way we supported the previous legitimate government in Tripoli", further assured Erdogan. This means that Ankara's military support will not cease as an agreement on this issue was also signed with the GNA in November 2019. In addition, last December, the Turkish parliament extended the authorization to deploy Turkish soldiers to Libya.

Apparently, the link between Tripoli and Ankara appears increasingly solid, despite a change of prime minister. Indeed, if al-Sarraj appeared "forced" to accept Turkish aid in order to counter the aggression of Haftar's militias (also due to the absurd European and Italian inertia), the new Libyan prime minister would seem absolutely in line with Turkish politics , willing to transform the territory of Tripolitania into a colony of Ankara.

Photo: presidency of the council of ministers / GNU / Anadolu Agency

In the last weeks of 2022, the consolidation of the "stratified" Russian defensive line east of the Dnieper River and...
6517
Read