Home geopolitics Analysis The re-election of Xi Jinping and his "dream ...

The re-election of Xi Jinping and his "Chinese dream" 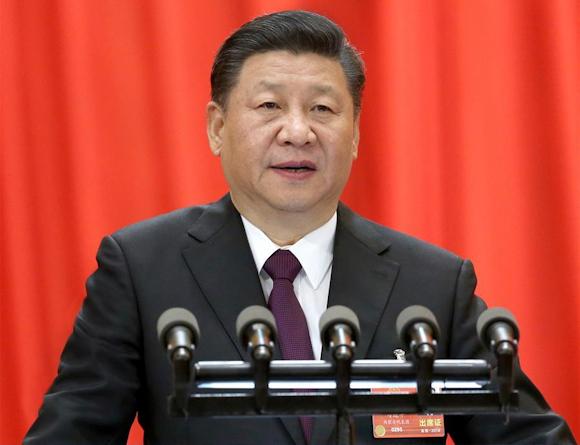 The 18 last March, at the end of the 1 session of the 13 ° National People's Congress (CNP), Xi Jinping was reconfirmed in the post of president of the People's Republic of China and head of the Central Military Commission (CMC).

The 3000 deputies of the CNP, representing the 56 ethnic groups of the country that make up the billion and 300 million citizens, have also re-elected the premier, Yu Zhigang, and appointed the deputy head of the CMC, Xu Quliang, along with the other members of the Commission.

Finally, other top positions, civil and military, have been chosen, including the vice presidents of the CNP and the general secretary.

The particular solemnity of the ceremony, rather unusual, culminated with the oath of Xi on the text of the Constitution, brought to the classroom by a picket of soldiers of the People's Liberation Army.

The figure of Xi is now further strengthened in his function as the inspirer and cornerstone of the profound transformation process under way in China, and the solemnity of his investiture ceremony is its plastic representation.

In fact, in addition to the two aforementioned offices (which has never happened before), the Chinese president is now also responsible for numerous "commissions" to which the task of piloting the transformation of the State is devolved, coherently with what Xi himself he called the "Chinese dream" the day after his first election in 2013. 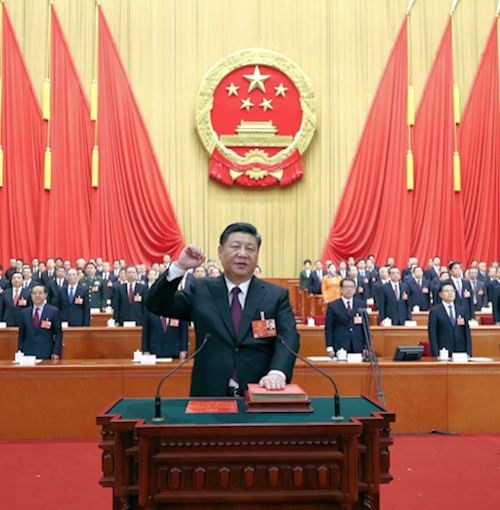 Among these: the "central commission for national security", which allows him to control the police, special departments, secret services, courts and proxies; the "central steering group for internet security and computerization", which is ultimately devolved to censorship; the "central steering group for a full deepening of reforms", which outlines the guidelines for economic, cultural, social and ethical reforms, allowing the new president to consolidate authority over the vast government apparatus.

It should be noted, among other things, that the aforementioned organisms are all Party organisms, the result of the (now consolidated) prevalence of the Chinese Communist Party (CCP) apparatus over those of the People's Republic. The Party, moreover, is considered (and narrated as) a fundamental guarantee to ensure the rebirth of the nation, and its leadership is the only one able to rewrite and realize the particular characteristics that "Chinese socialism" must possess.

It is not surprising, therefore, that the same battle against corruption has been entrusted to the "central disciplinary investigation commission", also one of the most important organ of the CCP.

The particular solemnity with which Xi has been invested intends, therefore, to communicate to the world the trust and credit received by the Chinese people for the realization of the project of change in progress, result of a vision of state (socialist) and of the future, which Xi - even this incongruous fact - obtained was ascribed in the Constitution of the CCP and in that of the Republic.

A vision, in the intentions of its inspirer, that will allow the Dragon (if he will be able to exploit the current period of "strategic opportunity"), to acquire in the short term a widespread level of economic prosperity and to rise to the global role that belongs to the population and strength of its economy.

The vision of the president-elect foresees, in fact, a moderately prosperous society within the 2020, its progressive modernization between the 2020 and the 2035, and, to follow within the 2049, the consolidation of a company "strong, prosperous, democratic, culturally advanced and democratic socialist". 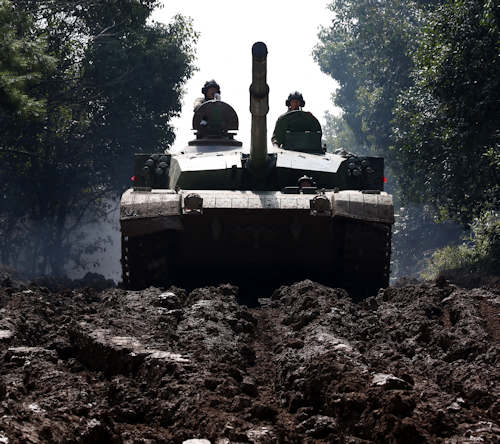 According to what was announced by Xinhuanet, the official news agency, Xi's first five years would have already produced (the conditional is a must) many fruits.

For the first time, in fact, domestic consumption would drive growth by weighing 58% of GDP, increasing by 5 percentage points compared to the previous year, while life expectancy has risen to 76,6 years, first among countries in development.

68 million would also be the Chinese who have permanently abandoned the condition of poverty, since it is added to the progress reported in the field of environmental protection and corruption, which Xi has accelerated never seen before, arresting many high poppies of nomenclature military and civil.

Perhaps even comforted by these results, Xi has repeatedly touched, during the session just ended, the chords of Chinese nationalism, referring to the millenary civilization of the Middle Empire and its "ability to continuously generate history, culture and science".

Xi Jinping is a China that poses no threat to anyone and does not seek hegemony or expansionism (even if the ongoing disputes with Japan, Vietnam and the Philippines in the East and South China Sea would seem to lead in another direction).

A China, on the contrary, all oriented towards realization "of great project, of the great cause and of the great dream ", that is, a shared development with all the regional partners, able to assign it as soon as possible the global rank it deserves, in the context of a common growth (win-win).

It is now clear that today's China thinks and acts already as a superpower and that its definitive and substantial affirmation is now only a matter of time.

(photo: Xinhua / Ministry of National Defense of the People's Republic of China)

The strategic reflection of the EU has always progressed with difficulty, due to the often different vision of ...
2672
Read

Al Qaeda loses its subtlest mind; like in a Tom Clancy novel, al Zawahiri was eliminated by the 2 missiles ...
4202
Read

In the course of the two previous analyzes we spoke first of the figure of the Prime Minister of Hungary, Viktor ...
8046
Read

India and China are the two major Asian powers and among the most important countries in the world. Their relationships are ...
1778
Read

In the spring of last year, the United States, United Kingdom and NATO announced the withdrawal of troops from the ground ...
2444
Read

It being understood that international relations, by their very nature, cannot experience moments of stasis, there is no ...
6013
Read

In the course of our previous analysis we talked about how the leader of the political party Fidesz, Viktor Mihály ...
3254
Read

In international relations it is advisable to let events settle; the risk of full bets without ...
2697
Read

Draghi and a large delegation of ministers - half a dozen - are preparing to conclude a large number of agreements ...
3382
Read

The dramatic human times - and therefore intrinsically geopolitical - that the collectivities and the powers they express are ...
3362
Read