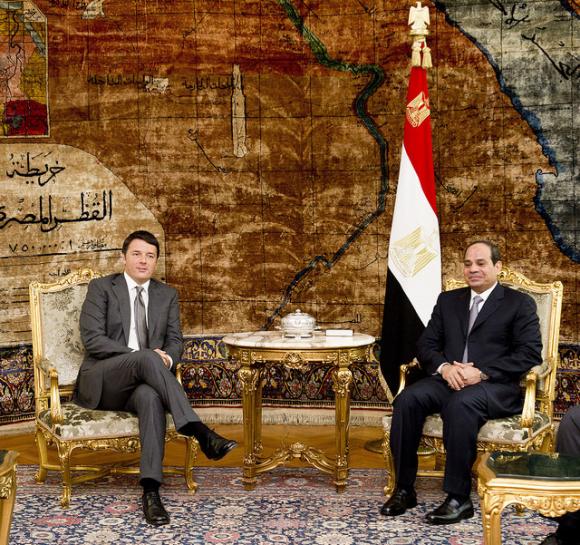 For Montesquie, the greatness of England was measured in the ability to submit political interest to the economy, highlighting how business was a "milder" affair than politics.

Looking at the Egypt of these weeks it would seem that the British teachings have made inroads into the heart and mind of the autocratic general Al Sisi, yet another uniformed president of an Egypt perpetually divided between normality and emergency.

In reality things are not as we read them superficially, in fact if we were to remain on the less profound layer of reasoning we would risk the umpteenth US-centric slide with relative erroneous interpretation of the North African issues.

Water for the Mediterranean countries and in particular for those on the southern shore is an element that has marked evolution, prosperity and conflict over the centuries, it would be useless to remember the great civilizations born along the imposing rivers of the Near East and the continent "across from" the Europe, however, would lead to other reflections than the 37 km doubling of the Suez Canal.

What we want to think about is how for the umpteenth time the management of waterways has affected the politics of an entire nation and can be a turning point in the geopolitical balance of a region.

After the Arab springs born in the political captivity of chancelleries incapable of understanding the instances of a wide area that goes from the Maghreb to central Asia, those who were the old friends of the Euro-Atlantic system were deposed by the 2.0 uprisings, however the long-awaited well-being it did not manifest itself and within a few years, in the words of Hillary Clinton, the rioters got out of hand became the first antagonists of the system that had trained and financed them.

In the incandescent situation that has arisen throughout the Euro-Mediterranean area, the country of the pyramids, which has always been a political laboratory and a fruitful underbelly of radical Islam, has decided to embark on a seemingly tactical course with purely internal political implications, but in reality of facts profoundly influential on international relations.

The doubled Suez Canal, built in a very short time (1 year nda), with completely Egyptian funds, presents itself as an unequivocal answer about the questions on the role of Egypt in the area and that is State leader and guarantor of trade in the Mediterranean, then element of geopolitical stability.

The concept expressed by Al Sisi with this move is simple: we Egyptians know the fundamentalists, we have deposed them, condemned them to death and we are so confident of our ability to be able to guarantee global maritime trade by doubling the traffic in an area that in the last decade had seen, due to Islamist piracy, an collapse in the transit of merchant ships and oil tankers.

New Nasserist policy? It would seem not, no fake pan-Arab announcement, no veiled ideological attack on Israel, only the pragmatism of a soldier lent to politics or rather imposed himself in power; to put it in the words of Davide Giacalone "It is not really the legitimate son of Voltaire" but given the current situation a mold dictator is better Baathist-like with respect to an uncontrollable and hostile Muslim brotherhood, however, the Arab socialist model over the decades has been alternately promoted, opposed and then re-proposed by the blindness of that certain blind and cynical West interested only in non-native fish species with doubling of the Suez Canal could reach the Mediterranean more easily.

As far as the diplomatic small Italy is concerned, the Suez issue was greeted with an indifference that would make one smile if it were not profoundly tragic, this new infrastructural implementation in fact places the Mediterranean once again at the center of trade routes coming from major exporters such as China and India and who better than Rome could, if only wanted, intercept the needs of logistical sorting and safety at sea for large ships in transit?

Maybe even strengthening anti-piracy activities in the Red Sea.

Perhaps too much is asked of this weak and disoriented political class, meanwhile the Mediterranean, destined to become a lake, with the Egyptian move has returned to the rank of main maritime waterway.

If we proposed an Al Sisi also at Palazzo Chigi?

As was widely expected, during the Summit of NATO Heads of State and Government in Madrid, Finland and Sweden ...
3119
Read