Home geopolitics Analysis The War of Wheat: Another Weapon for New ... 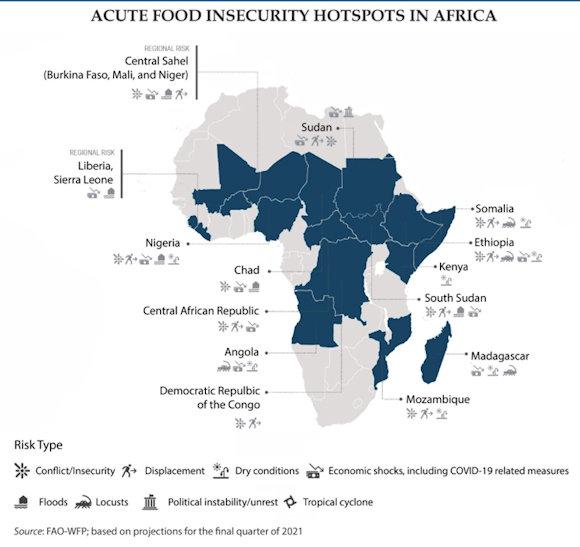 Wars are not only fought on the battlefield but also on agricultural fields. The world is witnessing an increasing number of people living in food insecurity and it seems to be a breakthrough discovery.

Food crises are largely related to wars. In Asia and the Middle East, millions of people are affected by food crises caused by conflicts, Yemen, Afghanistan and Syria are the most affected countries where political, social and economic grievances have triggered protracted violent and armed conflicts1.

We find the same conditions in sub-Saharan Africa, in Darfur, South Sudan and Tigray (see article), armed conflicts, intercommunal violence and localized tensions have contributed to food crises and hunger. In the central Sahel, the combination of jihadist expansion, state failure and crime (see article) has led to an exponential increase in conflicts, to an induced that not only leads to the collapse of agricultural production and the decay of infrastructures in the place of origin, but also interrupts and destroys local and regional supply chains and increases the prices of products food in local markets.

Food insecurity can become a "weapon of war" with the aim of depriving a particular warring party of the support of the population by cutting down on food supplies to harm hostile armed groups and the population that supports them.

The war in Ukraine, since the parties to the conflict are large exporters of cereals, is exacerbating the situation in the importing countries. 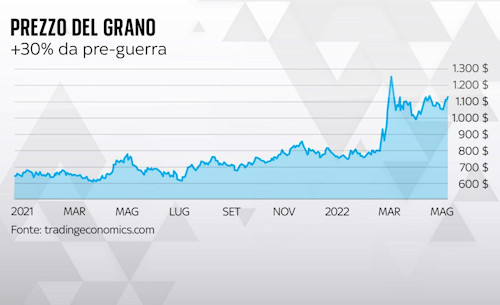 There is a lot of talk about the increase in the prices of wheat and cereals in general but in Italy and Europe prices were already rising before the start of the ISMEA conflict.

About fifty states depend on exports from Russia and Ukraine for more than 30% of their grain imports. Egypt, Turkey, Bangladesh and Iran import more than 60% of its needs by the two warring countries and the sanctions imposed could consequently have disastrous effects.

The Kiev Ministry of Agriculture has estimated that sowing in almost half of the land used for wheat cultivation could be compromised. The scarcity of cereals on the global market (due to both the conflict and the drought also in North America) has far-reaching consequences. The consequent increase in prices has led to an increase in the costs of producing poultry and eggs due both to the increase in cereals and to the increase in energy costs.

Russia and Ukraine produce about 15% of the world's soft wheat.

The European Union is the world's largest producer and Russia accounts for almost half of EU production. In light of this, Europe should not be affected by the lack of imports of soft wheat from the two countries in conflict which, instead, they are not among the first producers of durum wheat that is what we use for pasta. 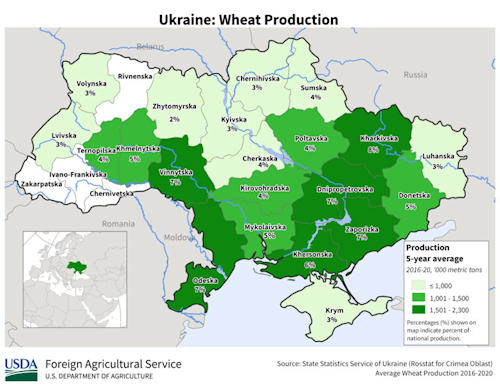 Why then, in Italy, are we witnessing an increase in prices also considering, as some suspect, an increase in cultivated fields? Probably because the two things, the Russian-Ukrainian conflict and rising prices, are not all that much connected. Perhaps this is more of an indirect effect such as the increase in energy and the drought that has hit North America.

We cannot underestimate the hypothesis of a strategy, on the part of Moscow, of using the food crisis of the African peoples, as previously mentioned, to destabilize Europe with a further massive immigration from those countries.

The aspects related to agriculture are not to be underestimated in Russia as the restrictions on the supply chain of other raw materials to and from Moscow could exacerbate the rise in prices. Analysts predict that the ruble, also due to Western sanctions, will collapse by 70% and higher prices and less supply (of raw materials in general) will bring Russian inflation to 20% with repercussions also in the West.2

The Russian president seems to have expansionist aims beyond Ukraine in order to put pressure on the countries of the Atlantic Pact to obtain other territories and trusting that the West, with the US in the lead, does not want to lead to a nuclear confrontation.

This war, on an economic level, will see as winners only the exporters of energy and raw materials such as rare earths (see article).

Between the second half of July and the beginning of August over thirty people died (including two soldiers ...
745
Read

The strategic reflection of the EU has always progressed with difficulty, due to the often different vision of ...
2706
Read

Al Qaeda loses its subtlest mind; like in a Tom Clancy novel, al Zawahiri was eliminated by the 2 missiles ...
4233
Read

In the course of the two previous analyzes we spoke first of the figure of the Prime Minister of Hungary, Viktor ...
8093
Read

India and China are the two major Asian powers and among the most important countries in the world. Their relationships are ...
1793
Read

It being understood that international relations, by their very nature, cannot experience moments of stasis, there is no ...
6031
Read