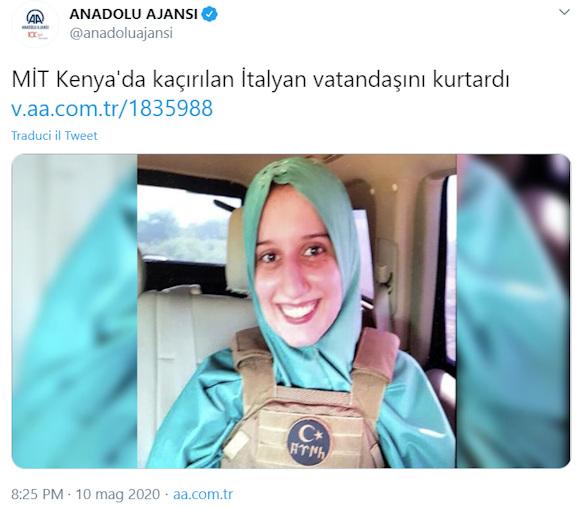 Silvia Romano had just got off the plane that had brought her back to Italy wrapped in hers jilbab - the traditional dress of Somali Muslims - that the exorbitant price will not have escaped the most discerning immediately, and here the economy has little to do with it, which Italy paid for its liberation.

If Italian hard coins to be used for the purchase of weapons ended up in the Al-Shabaab coffers, the political capital that Rome had to sell to Turkey during the negotiation phase and then for the "blitz" with which the young cooperant was released not only is it not yet quantifiable, but it is certainly substantial. Especially in this phase in which Italy and Turkey have different priorities in areas of common interest.

In Libya over the past few months Turkey has sent a serious mortgage on the influence in the former Italian colony with the sending of regular troops and militiamen in support of the government of Tripoli, so much so that the pro-Turkish party has returned to to be particularly influential in the capital and that in fact the political-military presence of our country has been eliminated. Not to mention that the mere presence of Turkish troops on the front line has allowed the Tripoli to obtain some meager success along the western coastal strip by loosening the grip of Haftar on the capital and stopping the advance of the LNA that seemed now unstoppable.

Front stabilization in Libya - which goes hand in hand with the political failure of the Berlin Conference (photo) - plays in favor of Erdogan and it will not be too long before Rome's position in its former colony is officially re-discussed with results that seem obvious today. 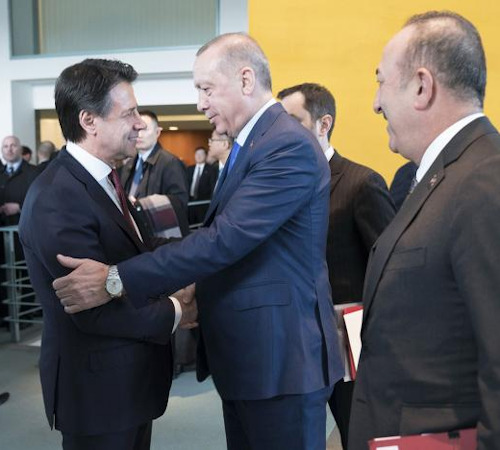 In the eastern Mediterranean, Turkey is playing a delicate game for the oil fields of Cyprus which has led to an increasing militarization of those waters to the detriment of states unable to guarantee projection capacity in the region. ENI ships in Cypriot waters for exploration and drilling have been repeatedly blocked by Turkish military vessels despite the fact that the Italian company has obtained regular licenses from the Nicosia government (v. Online Defense letter).

Ankara's stated goal is to increase gas production - as drilling in Thrace has highlighted - and to defend an area that the Turks believe is an exclusive influence as well as being at the center of an international dispute. The aggressive conduct held in Cyprus is part of the wider Turkish maritime policy which responds to strengthening needs - of hegemony certainly cannot be talked about - in the eastern Mediterranean as the unilateral expansion of its Exclusive Economic Zone (EEZ) together with that Libyan have shown. The action carried out to the detriment of Greece but, in fact, also of Italy will have to be analyzed sooner or later in Rome and the Italian government will have to take a clear position on the matter. Here too it is easy to imagine how difficult it will be to oppose Turkey.

The last element to be taken into consideration, as well as the one that reports directly to the story of Silvia Romano, is Turkey's increasingly massive political and economic penetration into Somalia. The increase in the financial resources of the "Turk Isbilrigi ve Koordinasyon Idaresi Baskanligi" (the Turkish Cooperation Agency) led to the disbursement of massive "humanitarian" funding directed to the Somali government: the construction of schools and the planning of development initiatives are on the agenda for the Turkish collaborators of Mogadishu, then Turkish companies control the Somali maritime and air trade routes.

From a military point of view, Turkish military advisers are training the Somali regular army (photo), a fundamental role in a country that does not yet have structured armed forces but which has a strong need to counter the presence of guerrilla and terrorist groups on the territory. 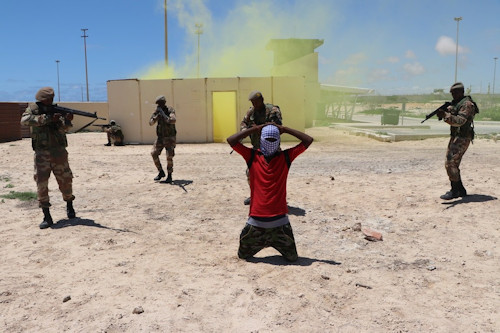 One fact that should not be underestimated is that Turkey has obtained concessions from Somalia for the exploration and research of oil fields along the coast; this is because energy policy is a fundamental component of Erdogan's neo-Ottomanism, indeed, it seems to be the very thread that links Ankara's strategy in Libya, in the eastern Mediterranean and in the Horn of Africa.

If until 1991 it was Italy that could boast massive influence on Somali politics and economics, the military anarchy following the collapse of the Siad Barre regime, the failure of the UN mission, the appearance on the scene of terrorist groups of Islamic matrix and the slow political transition have defrauded Rome of a real "exclave" leaving the field free to Turkish interventionism.

These are just three examples of how Turkish politics are in stark contrast to Italian national interests in regions of primary interest for both military and commercial security of both powers.

The release of Silvia Romano, which took place thanks to the wealth of knowledge on the local reality and theTurkish intelligence mediation actioninevitably generated a counterpart that Italy will have to give to Turkey as soon as the opportunity presents itself. Which is relative to not nocet in Libya, the downsizing of ENI's aspirations to Cyprus or a definitive abandonment of the Horn of Africa is not known.

Contrary to many other stories of freed hostages, that of Silvia Romano is an episode that will have huge geopolitical repercussions - which perhaps Italian public opinion will not immediately perceive - to the detriment of Rome.

Italy has a dangerous competitor in the "enlarged Mediterranean", this interpretation must be kept in mind in order to better redefine the priorities of our foreign and defense policy in the near future.

As we publish this article, photos of Silvia (Aisha) Romano wearing a bulletproof vest with the characters of the crescent and the star (present on the flag of Turkey) are circulating, aboard a MIT (Milli Istihbarat Teşkilati) vehicle, the Turkish Secret Services, which, according to national media, played a prominent role in the release of the young Italian co-operative.

The recent unrest in Hong Kong (as we write about 300 arrested protesters including several minors) are the ...
1741
Read

Stereotypes brand people and things, even nations. Brazil leads to Carnival, to football, to a set of ...
2177
Read

The great emphasis that the Turkish media gave to the release of Silvia (Aisha) Romano and the small train ...
1534
Read

According to Fedor Tjutchev1 “Russia cannot be understood with the mind, nor can it be measured with the common yardstick: Russia is made ...
2509
Read

A report by United Nations observers, who monitor (without much success) the arms embargo imposed ...
2163
Read

Let's play with logic and find a geopolitical point that unites classical Greece and Chaos Theory1: Taiwan. The pax ...
1871
Read

November is approaching, and Uncle Sam is preparing for the call of the American people that some want as a decision maker, ...
665
Read

The government of Giuseppe Conte has announced the details of the long-awaited "Phase 2" which presents "loose links" in ...
1666
Read

Interpreting Iran cannot be separated from the understanding of realities which, transversally, go through a religiosity ...
2059
Read