Home geopolitics Analysis It's coming Rome. The delta variant is for ...

It's coming Rome. The delta variant is going to make us like in the UK 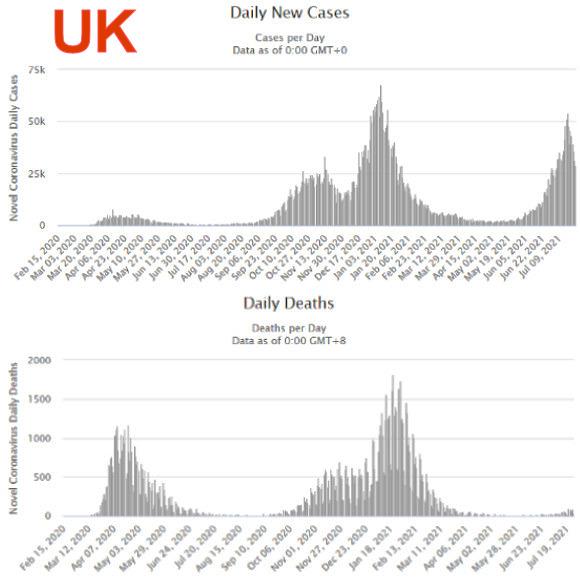 The delta variant crisis of Sars-Cov-2 in Italy began about 10 days ago: until the end of the first decade of September we will not see a visible and continuous decline in the number of new cases. Between here and then it will strike between one million and one million and three hundred thousand people in our country and will cause the deaths of one thousand or two thousand, mostly immunosuppressed.

It will also require more than five thousand hospital beds and will put less than a thousand patients in a position to require assisted ventilation.

No prophecy: it's just a comparison with what's happening in the UK.

It is hard to see why the same should not happen to us, given that in the last two years Rome and London have witnessed the same tragedies, in numerical terms.

Thus, we can say that it will also be due to this new wave, which has already crossed the peak beyond the Channel and is about to run out in a month or so.

But let's leave the numbers talking, taking as a comparison of the 50-day periods (30 for the calculation of deaths) in which in Great Britain they have seen three peaks of Covid-19 rise and begin to decline in the last twelve months: 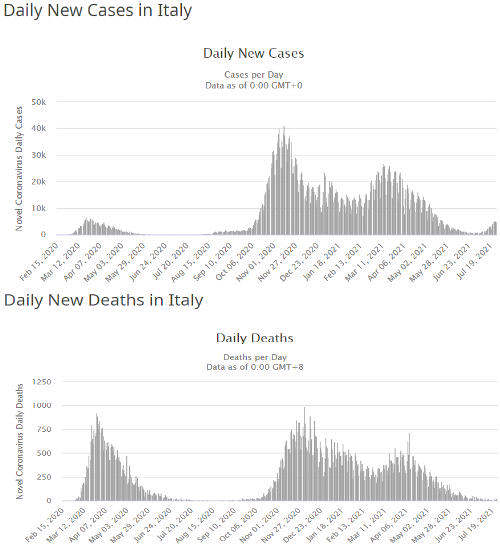 The effect of the vaccination campaign is more noticeable in the comparison with the second wave (the smaller one in autumn) than with the third one (that of the holiday season), because the number of cases is closer and the starting scenario is always that of an almost “COVID-free” period (last year the summer, this year the spring), before the return of the virus in style. Therefore, the deaths reduced to about a tenth, the almost 10.000 hospital beds not occupied by the most unfortunate "positives" and above all the need for ventilation reduced by four fifths, count a lot. And this, it should be noted, although the cases are now a third more than in the autumn.

The delta variant in India last spring, in a scenario characterized by the absence of vaccinations, followed a cycle of about twelve weeks, with a "slow" start during the month of March, an exponential growth between April and the first week of May and a massive fall in the number of cases between the second weekend of May and mid-June.

The trend of the curve is comparable to what is happening in Great Britain: it is probably the same that will happen in Italy. We keep in mind that anti-COVID vaccines, such as anti-flu vaccines, do not prevent the virus from infecting but clearly reduce its ability to seriously harm.

That said, hold on tight because the new wave won't run out until mid-October with us. Also continue to vaccinate and have your children over 12 vaccinated, because in the countries where the Euro-American vaccines approved by the EMA, FDA and MHRA (the European, American and British drug agencies) have been administered, the damage done by the fourth wave to people, to their health but above all to their freedom seem very contained.

Follow the cases of the United Kingdom, France and Israel and compare them seriously to those of the Arab Emirates, Chile and other countries where they have chosen the ineffective Chinese vaccines, or to the Russian case, where the population has refused any vaccination en masse. . You will notice how lethality, in Chile as in Russia, is nothing short of frightening compared to countries that have immunized such as Italy. In the Russian case, news reaches us of an actual number of deaths well above the 800 reported cases per day: for Moscow, it is the greatest mortality since the Second World War!

In conclusion, a final note: do not expect the pandemic to end before 2023 or 2024: it is likely to do as the only major pandemic caused by a coronavirus, the one that began in 1889 and lasted, with several waves, until beginning of 1895. Fasten your seat belts, dear readers ...

Mario Draghi spoke of Turkey as Italy's main trading partner in the region that includes the Middle ...
304
Read

The Mediterranean once again lends itself to being the ideal backdrop for those wishing to shift attention from Ukraine; ...
1614
Read

As was widely expected, during the Summit of NATO Heads of State and Government in Madrid, Finland and Sweden ...
4179
Read

The international situation is evolving rapidly and there is no country that does not have to adapt. In an area of ​​course ...
8418
Read

The focus of geopolitical attention cannot be fixed; Ukrainian drama aside, Asia continues to stir up more than ...
8907
Read