Home geopolitics Analysis Black Friday of the Omicron variant: this ...

Black Friday of the Omicron variant: something that no one has yet written in Italy 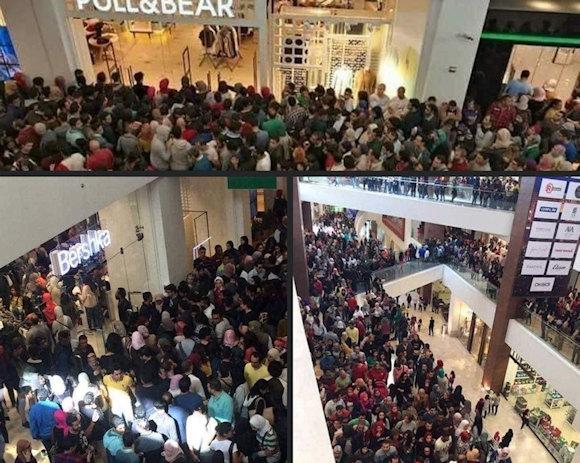 The new South African variant B.1.1.5291 crucified the world stock exchanges on the day of Black Friday, making Friday 26 November 2021 very “black”. But ultimately, it is a wave of collective hysteria, if - as stated by the microbiologist of the San Raffaele Clementi2 - “We have no data to say anything. All the information we have is based on indications of sequence and not of prevalence in an area where there are very few vaccinated. In theory it could be problematic, as rightly pointed out by Imperial College London, but it is too early to say, we must definitely follow it ".

Instead, we have data that no media has reported in Italy in recent days, indeed we could say that a strategy of silence has fallen on what we are about to expose you, almost in advance.

You know the headlines about the (really) tragic situation in Eastern Europe? We report some of them:

Collapsing morgues and corpses piled in the corridors. Covid overwhelms Romania and Bulgaria4

Apart from the fact that in Rome, morgues and burials are collapsing regardless of the pandemic, headlines and articles on the "catastrophe in Eastern Europe" are now a week old. In the last 5-10 days, things have taken a different turn and, needless to say, they have forgotten to inform us.

See below how Ukraine, Romania and Bulgaria peaked and see a notable drop in the number of cases:

Now look at how the number of the dead also tends downwards:

The situation in Austria, Slovakia and Germany, in the news until Thursday 25 November, does not yet show signs of decline, but it is a matter of days, at most weeks:

It is useless to hide behind a finger: in all three countries, where there were fewer vaccinates than in Italy, France and Spain, but still many more than in Ukraine, Romania and Bulgaria, the number of deaths is decidedly lower: 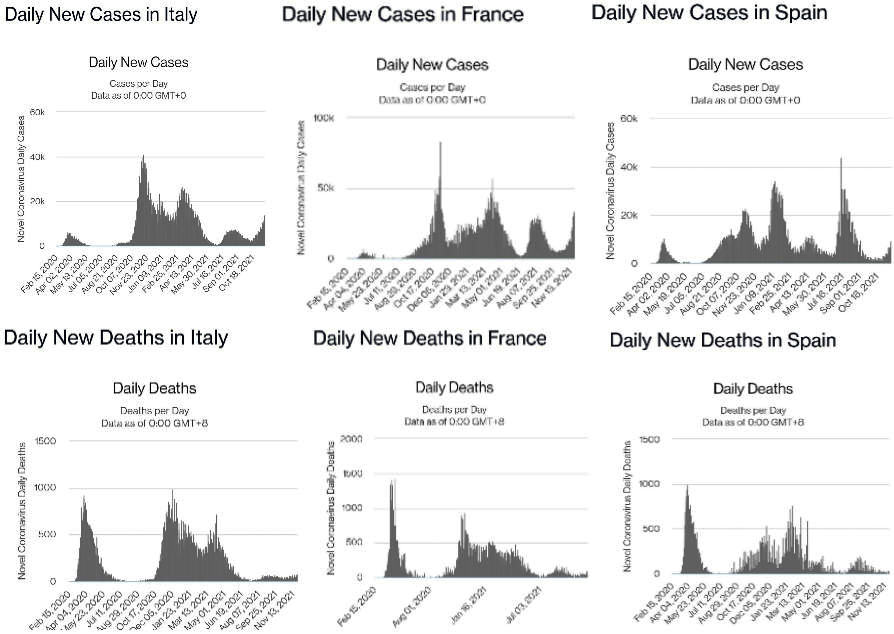 The special cases of Russia and the United Kingdom

Russia makes history in itself, where the trend of the infected seems to turn downward but where the statistics on the deaths are as credible as a three-euro banknote: 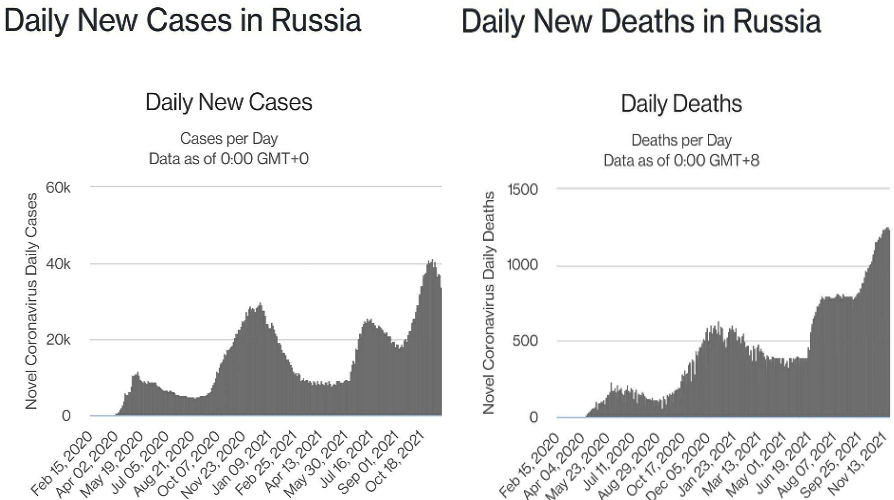 Equally, the United Kingdom also makes history in itself, where masks and distances have been abandoned, the cases detected remain many, the third doses advance but above all the lethality of Sars-Cov-2 does not worry too much: 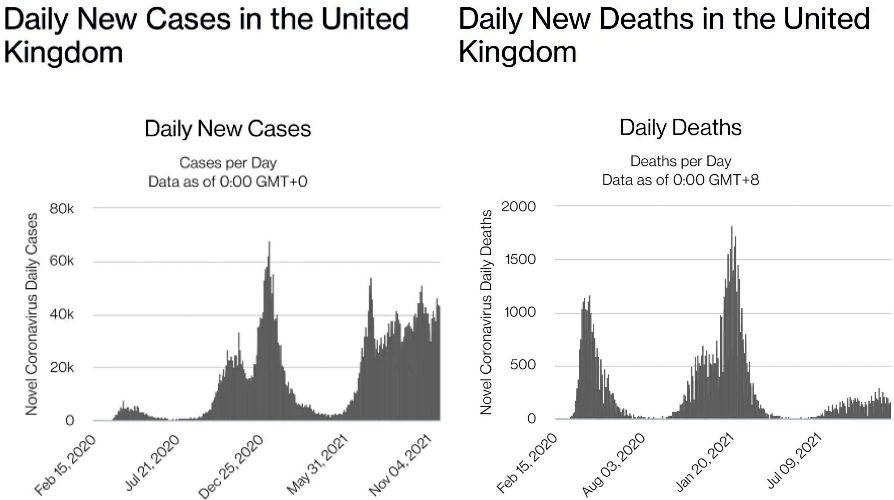 What is the point of getting vaccinated if you then get infected, as has happened in all the countries mentioned above, but also in Italy? If the point of reference is measles vaccination or smallpox vaccination, then there is no story: there, the serum works throughout life and contributes or has contributed to eradicating two of the three deadliest diseases in human history ( the third is the Yersina Pestis bacterium). But if we limit, as is right, the comparison to the flu vaccination, it is clear that we are faced with comparable, if not similar, data: flu vaccines are 70-80% effective in preventing the most serious forms of disease in patients most at risk and 80-90% in preventing infection outright in healthy patients. 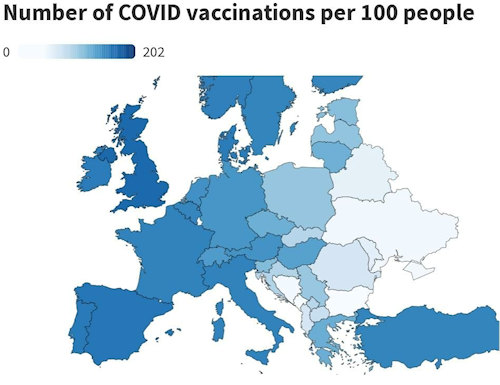 On closer inspection, the vaccines in use in Italy against Covid-19 work even better. And if the new variant "pierces" the vaccine shield, it will not be a tragedy: vaccine updates are already being studied that will enhance its protective capacity. Isn't that the case every year with influenza virus vaccines? Or did you think that for 10-20 years they have always played the same?

In short, the numbers speak for themselves:

PS If any pharmaceutical company has put microchips and 5G in vaccines, I personally welcome it: where I live, the Internet connection is so slow ... Maybe with the third dose I will be able to watch movies on the computer! It's a joke, but there are those who really believe it… Mala tempora currunt!

1 Which perhaps the WHO will call the Omicron Variant by the time you read this.

The strategic reflection of the EU has always progressed with difficulty, due to the often different vision of ...
2093
Read

Al Qaeda loses its subtlest mind; like in a Tom Clancy novel, al Zawahiri was eliminated by the 2 missiles ...
3845
Read

In the course of the two previous analyzes we spoke first of the figure of the Prime Minister of Hungary, Viktor ...
7622
Read

India and China are the two major Asian powers and among the most important countries in the world. Their relationships are ...
1668
Read

In the spring of last year, the United States, United Kingdom and NATO announced the withdrawal of troops from the ground ...
2356
Read

It being understood that international relations, by their very nature, cannot experience moments of stasis, there is no ...
5846
Read

In the course of our previous analysis we talked about how the leader of the political party Fidesz, Viktor Mihály ...
3145
Read

In international relations it is advisable to let events settle; the risk of full bets without ...
2635
Read

Draghi and a large delegation of ministers - half a dozen - are preparing to conclude a large number of agreements ...
3344
Read

The dramatic human times - and therefore intrinsically geopolitical - that the collectivities and the powers they express are ...
3300
Read