Home geopolitics Analyses We have tried the Plan B of Savona ...

We have tried the Plan B of Savona to put it into practice. Here's what happens ... 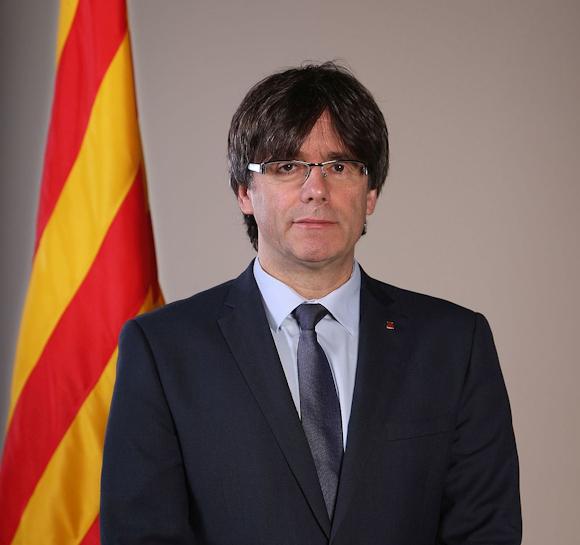 Look for the keywords: "Piano B Savona" on Google and you realize that five million results emerge. To understand, more or less as "Palio di Siena" and "Alfa Romeo Alfetta": enough to say that a media phenomenon has been born and that people continue to discuss even if the president Sergio Mattarella has moved Professor Paolo Savona from the potential role of super minister of the economy to the effective role of responsible for relations with Europe. Yeah, a bit like moving from a human resources manager to a company where your former treacherous employee works at the emptying of baskets in his office. We do not imagine enthusiastic former government minister led by Carlo Azeglio Ciampi ...

The reader will forgive the whim of the writer. The fact is that we the notorious Plan B we read it all right. It seemed serious, but it did not fascinate us: it was not born as a political manifesto, but it was written in a very articulate and rich way to answer in advance to many technical-economic objections. For this reason, in the end it ends up looking a bit "indigestible" for those who face it with the aim of imagining it in motion, not just static on paper. We do not intend to do an in-depth analysis, which we may reserve for the month of August, in order to offer "beach" readers something (perhaps) appreciated. We like, as mentioned, try to turn the key, to start the Plan B. With amazement, we realize - and in a few lines we will explain why - that does not start, does not start: not even burst. Precisely, it makes a silent scene, like the first car produced in Turkey many decades ago, which at the time of the inauguration did not want to ignite. There is the doubt that it is a bit like certain inventions of Leonardo da Vinci: maybe Paolo Savona - as often did the Renaissance genius - has rigged the project not to copy it to the "rivals" and has not made any major mistake. The writer leaves the conclusion to the reader, while trying to find the trick or the error that blocks the machine of Plan B.

We think we find it in the 31 slide (iimage below) since other similar slides are actually pure theory and attempt to justify the action: the slide 31 provides the first real steps, to be done, starting from the first, to say the least naive: "forewarn other governments ... with minimum advance "of the intention to" remain within the EU ... by breaking the treaties "and then" to leave the euro zone quickly "by making" friendly statements ". Here is the busillis: the minimum notice. Please forgive the highly esteemed professor, but find it difficult to find a politician in the entire national history (let alone in the present picture) assume the burden (or honor, if sovereign) to make this series of useless and bizarre communications. But let us also make a politician available - or be convinced - and that he is the ambassador of these Fantozzian communications ("we will honor the commitments as much as possible ..."). Well, it's ten o'clock in the evening on a Friday and the bags are closed: we inform Europe and the world that we are leaving the Euro, with all the verbal "guarantees" mentioned above and making loyalties to the European Union . What reaction is to be expected? Does anyone seriously believe that on Monday morning the president of the Italian council can sit - more or less serenely - at the table together with one or all the leaders of the Union as if nothing has happened? If someone thinks it, the facts will fall on him like boulders: as we prepare to make friendly statements, what will happen to us will be subjected to the harshest ostracism and isolation seen in Europe since the Second World War: in short, we will find ourselves surrounded by a sanitary - political, economic and diplomatic cordon - as happened during and after the War of Abyssinia. Yes, because we will be, willing or not, in fact and in law outside the European Union and to play the role of the Gano, the traitor of the Empire: there is no clause for the exit from the Eurozone, we will automatically slip out of all treaties constitutive of the European structure, apart perhaps (and to no avail1) Schengen, NATO and the OSCE. In short, no more free circulation of goods, services, capital and people. And all this not as a product of negotiations, more or less harsh, with Brussels and other capitals, but from evening to morning, the result of a unilateral decision "in a hurry" followed by "friendly statements". 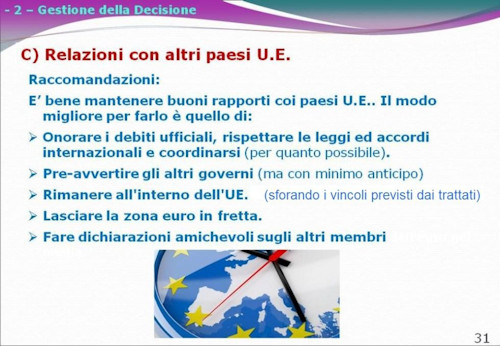 Once this piece has been removed, the Piano B machine actually starts working. The writer wants to show you his first steps, asking the reader to try to immergercisi for what it is: entrepreneur, student, career military, unemployed.

We stop here. The Catalan case descends on Plan B as a warning: some dreams sometimes turn into nightmares. And some awakenings are very bad.

1 Because we will most likely be suspended by everyone at the request of European partners.

2 Faced with a massive issue of over one trillion, one could easily pay debts in footballer's cards or in Monopoly banknotes: the value of the currency issued and offered to the poor Italian creditors would be more or less the same as the paper used to print it.

Turkey is increasingly determined to impose its role as a bridge state between Europe and the Middle East. In the region is ...
1758
Read

After the rapid victories of the Tripoline forces against Haftar's troops in Tripolitania the attention of opinion ...
4104
Read

We followed, like many others, the latest US events and their vast echo in the world, and we preferred ...
1947
Read