Home geopolitics Analysis Evolution or devolution of the situation ... 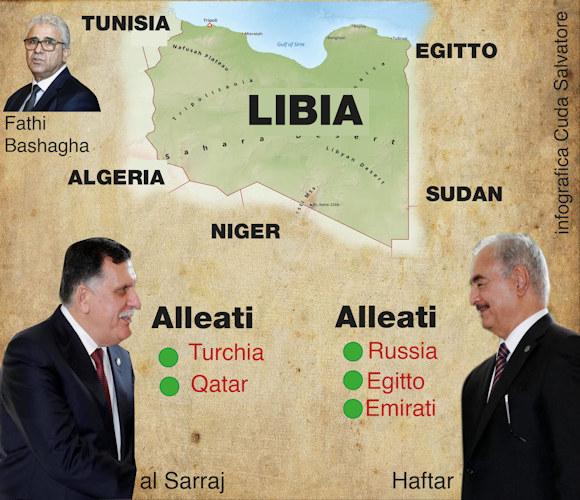 Once upon a time, but perhaps now there is no more, a dream of peace on the other side of the Mediterranean, in a Libyan land linked for over a hundred years for good and bad with Italy. This dream no longer exists and the huge investments of billions of euros in recent years, burned by a too short and provincial vision, have been worth nothing. Italy is out of the game despite recent visits intended to save what can be saved. The big business that could unite Italy to Libya is faded by the international initiative that aims at splitting up the rich country

In the mess in front of the house, everything could change quickly. In Libya, President Erdogan signed a protection pact with his allies to ensure continuity for al-Sarraj's GNA, extending its capillary network of control, but something is moving in the Libyan swamp. We talked about it in a previous article and we are continuing to follow because there is no limit to the worst, and it could happen near our home.

Evolution or internal devolution for the Libyan people?

In fact, the situation shows the opposition of the two main camps, the Tripoli Government of National Accord (GNA) of Serraj, which seems to survive only thanks to the military support given by Turks and Qatarinis, and the Libyan National Army (LNA) of General Haftar supported by Russians, Egyptians and Emiratis in Cyrenaica.

They are not the only ones to fight each other in this mess on our doorstep and their presence on Libyan soil is destined to last for a long time ... just think of the concessions to use the bases in Cyrenaica and al-Watiya for 99 years behind. a political fee but also of many dollars. For Turkey it means re-establishing itself in an area of ​​great economic interest where, since the days of Gaddafi, it had invested almost 30 billion dollars.

But there are also historical reasons. Taiyyp Erdogan does not forget that, following the Italo-Turkish war, Libya was annexed by the Kingdom of Italy after more than three centuries of domination, and today he can return with his troops in the form of an "unofficial protectorate". This is another point acquired by the Turkish president in front of his electorate to crown an aggressive and intelligent foreign policy, even if at the expense of our country as well.

Obviously the advantages of Ankara are not only in the prestige and the internal consensus, but also in the profits of the oil market in which Turkish investors could invest billions of dollars, snatching their market shares from foreign companies.

In Tripoli, popular protests intensified in August due to the worsening of living conditions with continuous interruptions of the most important services, and government corruption. Firearms were recently used to disperse protesters and al-Sarraj imposed a 24-hour curfew for four days under the pretext of wanting to "fight the new coronavirus," a move seen as a tactic to curb the protests. Meanwhile, the bowls have not stopped spinning.

It is fought in the Sirte

According to the satellite broadcaster al ArabiyaNaval units of the GNA militia have begun patrolling the coast line with the support of Turkish forces off the towns of Sirte, Ras Lanuf and Brega. It is not the first joint movement of forces since the signing of the agreement between Tripoli and Ankara but it could be seen by Haftar and his allies as a provocation. Over two hundred armored vehicles have perched on the coastal strip and this is also not a good sign. The reasons, obviously denied by the other side, are the response to alleged bombing of the sites controlled by the GNA forces west of Sirte by the LNA army (Haftar), through belonging to Karama with the support of Russian contractor Wagner , which would have launched more than 12 missiles City against the regular forces in a blatant violation of the ceasefire agreement. Al-Sarraj, on the strength of Turkish support, stressed that "The operation of Sirte and Jufra will not hesitate to respond to these actions, as approved by the field operations". Therefore, there continues to be no peace among the sands of Libya, but perhaps not even in the buildings of Tripoli.

In the meantime, the violation of the UN arms embargo in Libya continues. The head of the United Nations Mission in Libya, Stephanie Williams, revealed that several foreign powers continue to supply arms and ammunition to both the forces of General Khalifa Haftar and the government led by Fayez al Sarraj.

But if these can be seen as skirmishes between the two factions, reinforced by the powerful allies, there is a new possible source on the horizon. Between Serraj and Haftar a third character also begins to emerge, Fathi Bashaga, the strong man of Misrata, well regarded by Turks and Qatarinis but, perhaps, also by Washington.

Fathi Bishaga is a former military pilot who over the years has shown himself to be a skilled and astute politician; a rising star in Tripolitania capable of coordinating the efforts of military commanders with Tripoli's new heterogeneous allies. In fact, Fathi Bashaga has always appeared close to Turkey and the Islamist movement of the gods Muslim Brotherhood. His proximity to Turkey, however, is not accidental: he comes from a family of Ottoman origins and, as in other countries where there are Turkmen minorities, this lineage has proved useful for the affirmation of Turkish influence. This is of particular importance in Libya where the role of this minority seems to have become important with Ankara's growing political, economic and military involvement in the country.

Bashaga held the role of Interior Minister until recently but, following the protests in Tripolitania, he was suspended by Sarraj and was put under investigation for failing to act with due firmness to prevent some militias from shooting at protesters in the capital.

It would seem that there has been no good blood between Prime Minister Sarraj and his Minister Bashaga for a long time. Unconfirmed rumors report that in Tripoli, where the Special Deterrence Forces (Rada), a radical Islamist military police unit for special operations formed in 2011 in Tripoli to fight crime after the fall of Gaddafi's dictatorship, close to Bashaga are very strong, the demonstrators had chanted slogans against Sarraj. Perhaps a useful opportunity to exacerbate the situation by countering the demonstrators not with fire hydrants or batons but with the use of firearms. Strangely, this did not happen in other cities where Bashaga has greater support.

Sarraj did not waste time and, before the situation degenerated, he used the event to suspend this possible uncomfortable competitor. His duties would now be taken over by the deputy minister, Khalid Ahmad Mazen. An official statement states that: "An investigation has been opened against the Interior Minister (Fathi Bashaga) regarding his statements, actions and guarantee of the necessary protection of protesters in Tripoli and some other cities". At the same time, in a separate decree, Osama Jweili, the commander of Zintan, a militarily powerful city, was assigned the task of ensuring security in Tripoli.

For his part, Bashaga said he was willing to investigate his public work to ensure transparency. The rumors of his reintegration (confirmed in the last hours) are running in the corridors and the conflict between Serraj and Bashaga promises to be interesting, even if in fact the clash between them will only weaken the government of Tripoli, slowing down the possibilities of pacifying Libya .

The international situation is evolving rapidly and there is no country that does not have to adapt. In an area of ​​course ...
7156
Read

The visit of the Chinese foreign minister, Wang Yi, who in the second half of May touched several small states ...
1055
Read

The focus of geopolitical attention cannot be fixed; Ukrainian drama aside, Asia continues to stir up more than ...
8766
Read

The vote in the UN Assembly of the motion condemning Russia's aggression against Ukraine has ...
3124
Read

The rise of China as a global economic and geopolitical superpower has heightened tensions and concerns about ...
3281
Read

Last May 23, with a grand ceremony attended by President Recep Tayyip Erdoğan as guest of honor ...
4509
Read

The Ukrainian campaign could prove to be more costly and damaging for Russia than anticipated. Despite a ...
2629
Read