Home geopolitics Analysis Dragons in Algeria: a lesson in geopolitics 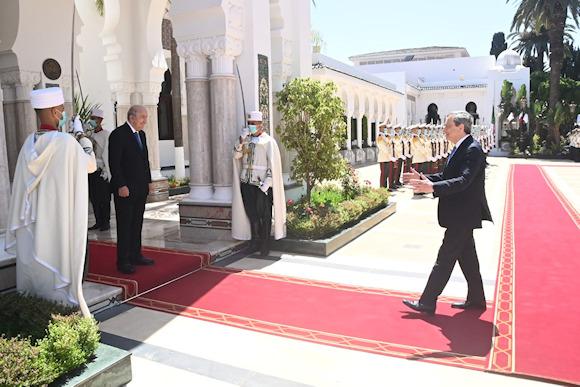 Draghi and a large delegation of ministers - half a dozen - are preparing to conclude a large number of agreements - of enormous geopolitical importance - between the Italian Republic and the People's Democratic Republic of Algeria.

The relationship between Rome and Algiers is a history of important relations that began even before the end of the war of liberation. Already since 1955 in the pages of many newspapers (including "Il Popolo" of the Christian Democrats) the Algerian "rioters" were defined as "patriots": on the other hand, in 1957 Fehrat Abbas, who would soon become Algerian prime minister, in an interview with “Il Tempo” stated that the nationalists of his country were inspired by the Italian Risorgimento.

It is no coincidence that, once the case of the arbitrary expansion of the Exclusive Economic Zone by the authorities of the Maghreb nation exploded in 2018, the local government responded to the Italian (and Spanish) protests by ensuring, at least on paper, "complete willingness to participate joint efforts to find, through dialogue, a fair and mutually acceptable solution regarding the external limits of the exclusive economic zone of Algeria and the maritime space of Italy, in accordance with Article 74 of the Convention of Nations United on the law of the sea ". But it is useless to hide it: at this moment in Algeria we are not interested in friendship, but in gas. Algiers, in fact, has one of the largest natural gas reserves in the world at Hassi R'Mel: discovered in 1955 and having reserves of approximately 2.000 billion cubic meters of recoverable natural gas, it is connected to Italy by a 2.220-meter gas pipeline. km, of which 370 km in Tunisia, 380 km are on the seabed and 1.470 km in Italy.

A new line, from the early 1983s, runs largely parallel to the original pipeline completed in XNUMX. The pipeline's arrival point in Italy Transmed, also named after the former (very late) president of ENI Enrico Mattei, is in Minerbio, near Bologna, in the Po Valley, where gas enters the national gas distribution system.

By now, Algeria is our first supplier, waiting for the installation of regasification plants, before this emergency opposed by Cinque Stelle and Verdi, to allow us to further diversify our supplies.

Let's face it: we don't feel safe, because geopolitics reminds us of the civil war in Algeria in the XNUMXs, of the repressions of what is in fact a secular military dictatorship and of the fact that many crises are burning around Algeria, including war civil society, the tensions between Algiers and Rabat and the perennial instability of Tunisia. Not to mention sub-Saharan Africa ... However, we can't be too picky: for decades we have left in the ground the methane present in the waters and in the subsoil of the Peninsula. And we have not even drawn energy from the main product of Italian families and businesses: waste. In order not to go looking in Austria or Northern Europe, suffice it to say that the Brescia plant is capable of treating more than 500.000 tons of waste, on three independent incineration lines, from which enough heat is obtained to heat over 30.000 connected homes. to the district heating network. The electricity produced by the plant, up to 85 MW, can cope with the annual energy consumption of approximately 130.000 households.

Ask the Italians of the Central South where they are with the "waste-to-energy" ... Evidently, it sucks us to live better. And the Algerians also disgust us. But when will we ever be able to do our interest instead of going after, like weathervanes, to those who always and only say no? We waited for Russian tanks to hit the streets of Ukraine to understand that depending on a single supplier - which also imposes political prices on you - and on a single hydrocarbon is suicide. Geopolitics should teach us that there are national interests and not just small private selfishness, but so be it ...

"Do we want peace or the air conditioner on?" Words of Draghi in April. To hear the same people who make and have waged the war against waste-to-energy plants and the diversification of suppliers for decades, we want air conditioners, electric scooters, cars “on tap” and so on. As long as we don't want the interests of our country ...

Between the second half of July and the beginning of August over thirty people died (including two soldiers ...
829
Read

In the course of the two previous analyzes we spoke first of the figure of the Prime Minister of Hungary, Viktor ...
8098
Read

India and China are the two major Asian powers and among the most important countries in the world. Their relationships are ...
1795
Read