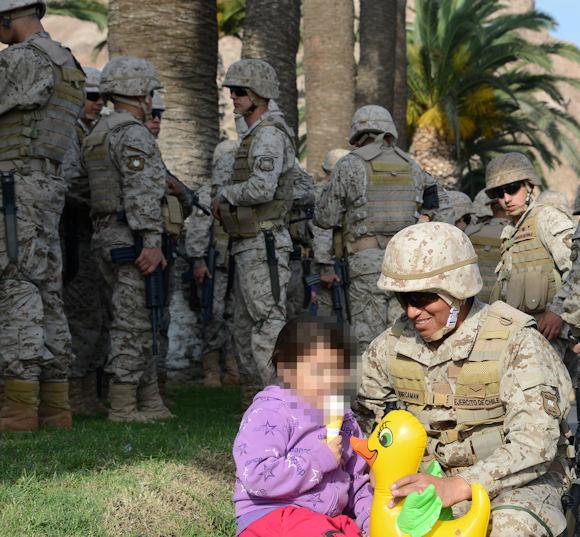 A constituent process is underway in Chile, decided by the pressure of the socio-economic protests of 2019-2020. To change the constitution and with it the skin, perhaps the soul, of the country; to conquer a more complete democracy, or to better "mask" the current one "as far as possible", as the former first post-dictatorship president (1990 - 1973), Aylwin, baptized it in 1990, after having inherited it from the military dictatorship of Pinochet.

The protests are only the last part of a river, made up of historical contradictions, which Chile, and the whole continent to which it belongs, continues to struggle to resolve and which was born well before the dictatorship itself. Among these, the relationship with the military.

To embody the nation or to serve it? And embody it how? How to serve it? What sense do these concepts have and have they had in the self-awareness of the Chilean armed forces? To think about yourself correctly, you must first be thought of by someone else, confront and clash with the project of others, in this case the civil power, only afterwards you can be part of the system in equilibrium.

As with any Latin American country, Chile has seen countless civil wars, military coups, fragile democratic institutions lived in the shadow of either the memory or the presence of the military threat.

Understanding why strength has been chronically more critical than a power multiplier in Chile requires a backward and extended look at the continent to which it belongs. Backwards, that is, to the history of the identity of the Chilean armed forces, which is deeper than Chile itself. Because in Chile strength arises before law, that is, the army before the nation. Rise first, that is, rise without the nation. But, without a nation, force does not create the nation, but the right of force itself, that is the absolute right of the armies to become a nation, regardless of any actual existence of a national project, which supports its dynamics. 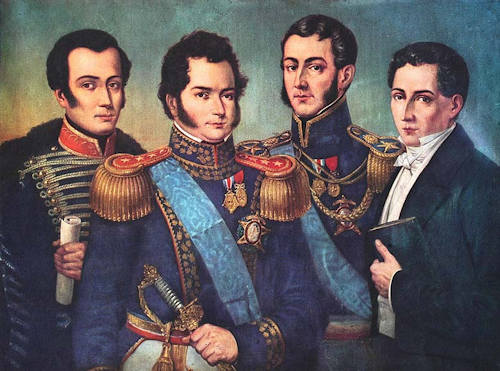 The independence of the early nineteenth century against Spain is nothing more than a first civil war between Spaniards, not even immediately against the peninsular ones (of Spain), but between groups of Creoles (Spaniards born in Chile) more or less adhering to the maintenance of the imperial project -Spanish absolutist, until both factions understand that for absolutism colonies are colonies, they exist in the form of resources, of banquet at the Spanish table. By now, the Chilean elites, emancipating themselves from it, do nothing but reproduce the colonial pact, this time, however, with them at the head of the table. For the classes that were instead excluded and submissive (indigenous Amerindians, imported slaves, mestizos) nothing changes, they remain below and outside.

It is the armies that created the state, they embody every value. The civil political class speaks the language of the model imprinted by this origin. They are a ruling class, not a ruling class, because there is no society, but elites and submissives to exploit. It is the era of caudillism, of military leadership, of military values ​​as a paradigm of whatever it means to be a nation. It is a process similar to the other countries, which emancipate themselves from Spain by following a myriad of states built on the administrative borders of the Spanish empire. Or conventional.

Such independence does not extinguish contradictions, but rather distributes them horizontally. In fact, the South American states want to expand those borders or at least consolidate them. Rewrite them with blood. The armed forces of the respective countries, and of Chile itself, have the opportunity, with the border wars, to mobilize the population, force it into unity to face the danger. Thus they build an embryo of national conscience, but precisely through war, which reproduces the idea that the homeland is such only thanks to the military factor and its values, strength, hierarchy, compactness. They create frontier identities, but still not the intrinsic national planning unity. 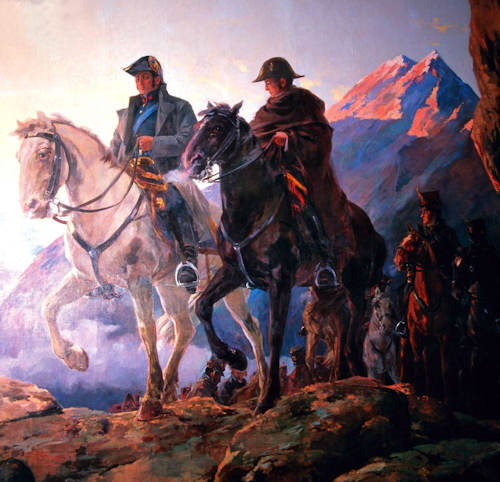 They are actually limited wars, because the nature to cross in which they are fought is giant. The Andes, the deserts, the Amazon etc ...

For this reason the wars in Latin America are more civil wars than conventional ones, because, either they are in fact between "Spaniards" of other countries, or they are internal civil wars, in the impossibility, due to nature, to unload the aforementioned contradictions externally, how dynamic would impose.

The civil war is itself part of the Iberian-American national paradigm. Forge societies ... but dividing them. Because the model remains tax-colonial. Some above, some below, both always the same.

Military leaders, formerly emancipators, are now also creators of the new borders. They liberated, defended and, defending it, built the homeland. They are the homeland. Any civil power arises by concession, because it has no conscience of its own, not being the depositary of any national value.

In Chile, civil power will always be at risk of inconclusion due to intrinsic weakness and as such exposed to failures that lead it to see the military patron's intervention as legitimate. If, on the other hand, he tries to free himself from the military project and to change that whole social model, including the submissives, limiting the power of industrial landowners, he does so with the fragility of those who, nation, cannot quite believe that they can be. Then the military intervenes. They suffocate. The nation is still them. Any phenomenon outside this grammar is disorder, betrayal.

Towards the end of the 800th century, the armed forces undergo a process of institutionalization and professionalization. Defending the country means protecting it, guaranteeing peace, to defend a well-being that, the brighter it is, the more it covers inequalities. Don't get confused with this process: the armed forces still believe that the country is "their", but economic growth has generated a stability that appears to be solidity. It is not inherently. 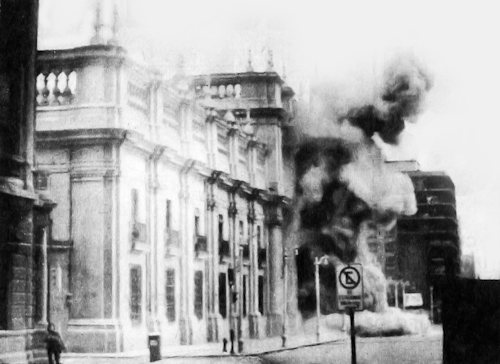 As soon as the faults of society re-emerge, as soon as a certain Allende (previous attempts fail) in the second 900 tries to give a radical socialist response to the crisis, that is, an alternative national project to the original, and tries to do it during a historical phase , the cold war, where every change is synonymous, for the US referent, with communism, here the military breaks in, convinced that they are fighting in defense of the nation, where the enemy is internal, is extended to civilians, is a communist.

The doctrine of national security is nothing more than the military practice of an idea of ​​Franco-American origin of counter-insurgency against the communist danger, translated into Chile with a ruthless dictatorship.

The armed forces believe they embody the nation. To take power is to save, to redeem. It was the military themselves who wrote the Chilean constitution of 1980, a "protected" democracy with which to hand over power to civilians with a mortgage, following the decline of US support and the Cold War.

In Chile, current democracy was born in the darkness of this dictatorial thought. Since 1990 it has eliminated many authoritarian filters of that constitution, but the underlying grammar remains. A democracy as far as possible. With the implicit formally removed, that what is possible is a concept in the hands of the military imagination.

Changing the constitution means dealing with the symbolic cancellation of this origin and, ipso facto, strengthening the integration of the military factor in a web of participatory and therefore democratic powers. 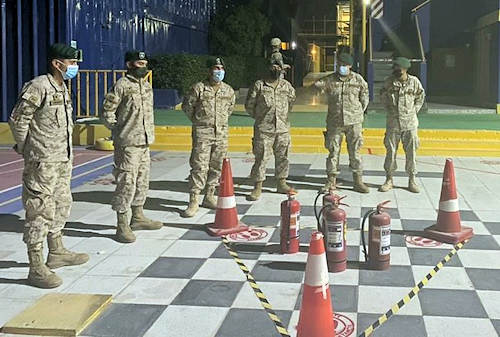 But are the military ready for the passing of a bicentennial culture? Today Chile is a solid democracy, but in fieri. The very reaction of the government class to the protests, imagining them as war, and the response of the armed forces, instinctively called to defend the country from the internal enemy (the people), with the relative number of deaths to certify the mentality, must not, however, lead to believe that the pendulum swing back to that culture.

Writing the new constitution is a solving step of socio-economic problems, which cannot truly be solved without understanding what the nation and its military arm are.

Of course, strengthening civil society, making it more and more itself state and nation will also balance its armed force more effectively, so that it defends and projects democracy instead of threatening it. It is a dialogue between national projects that will have to transform legal integration into a substantial intertwining.

After two centuries, the new constitution may be the occasion for the right to decline in force. To achieve democracy ... and above all nation.

As was widely expected, during the Summit of NATO Heads of State and Government in Madrid, Finland and Sweden ...
3035
Read

The international situation is evolving rapidly and there is no country that does not have to adapt. In an area of ​​course ...
8236
Read

The focus of geopolitical attention cannot be fixed; Ukrainian drama aside, Asia continues to stir up more than ...
8840
Read

The vote in the UN Assembly of the motion condemning Russia's aggression against Ukraine has ...
3192
Read

Wars are not only fought on the battlefield but also on agricultural fields. The world is witnessing a ...
1514
Read

The Ukrainian conflict does not stop international relations, which are bound to each other by a globalization ...
2362
Read

The rise of China as a global economic and geopolitical superpower has heightened tensions and concerns about ...
3334
Read

Last May 23, with a grand ceremony attended by President Recep Tayyip Erdoğan as guest of honor ...
4587
Read

While a part of the world watches with concern the evolution of the situation in Ukraine, in other regions of ...
8050
Read