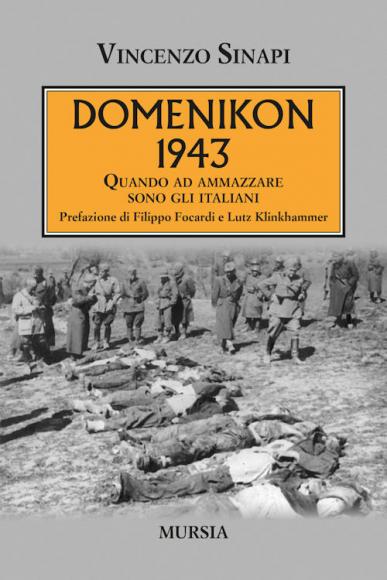 “I had to witness scenes capable of making you lose your mind. Sure they were young soldiers, 18-20 years old, but in the end they were able to put you on the wall. What could we do, this was the situation ".

The Domenikon massacre, in Greece, was carried out on February 16, 1943 by the soldiers of the Italian occupation forces: at least 140 civilians were killed as a reaction1 to a partisan ambush in which nine Black Shirts died. All the "good men" of this small Thessalian village (that is, any male between the ages of 14 and 80) were exterminated. It was one of the worst massacres carried out by the Italian military in the Balkans. The first of a series of massacres that characterized the spring of '43. Well, for all the massacres committed by the Italians - and for the Domenikon dead - no one has ever paid. It is a sensational case of denied justice that has dragged on up to the present day and which, as reconstructed in the book "Domenikon 1943. When Italians are Killing" by the journalist Vincenzo Sinapi, is unmentionably linked to that of impunity assured to criminals of war Nazis responsible for the massacres committed in Italy. The failure to celebrate the trials of the latter, with the related files covered up in the Cabinet of Shame, was the price paid to spare the Italian war criminals, safeguard the honor of the Army and the myth of the "good soldier" at the Captain Corelli.

The "papers" concerning the crimes committed by the Italian military in Greece and in the former Yugoslavia were not inside a wardrobe with the doors facing the wall, but in various archives. Those acts would have made it possible to carry out judicial investigations profitably, and perhaps someone could have ended up in the bar. But this did not happen. It took journalistic inquiries and even a complaint from within the military judiciary itself to open a proceeding, but by now time was up: no surviving potential defendants were found and the proceeding was for the first time closed. Despite this, a military magistrate, urged by the nephew of one of the victims, exhumed the file some time after, carrying out new and more limited investigations, this time aimed exclusively at shedding light on the Domenikon massacre. The tests took years - and every development is accounted for in the book - but the result was no different. No culprits for Domenikon.

The judicial matter was definitively closed in 2018. The military investigating judge accepted the prosecutor's request for dismissal because those responsible are all dead, now, or remained 'unknown'. An acquittal of which the military prosecutor Marco De Paolis has irritably apologized to the families of the victims, with a letter reported in the book. "We have traveled all possible roads, the investigative effort has been great, every clue has been exploited. But we have run into insuperable obstacles due to the long time that has elapsed. Too long a time", wrote De Paolis. "I feel bitterness for not having been able to give you, your community, the positive answer of justice that is due to you. And for this I apologize".

As the historians Filippo Focardi and Lutz Klinkhammer write in the preface of the book, unlike what happened in Germany, and also in France, in Italy "A public examination of conscience on one's responsibility for the crimes committed in the colonies and in the European territories occupied during the Second World War has so far been held back by various factors, including (...) political and institutional interests reluctant to recognize the country's misdeeds, not least to avoid any requests for compensation from family members of the victims of Italian crimes ". But if from a historical point of view “It's too late now - wrote Focardi and Klinkhammer - to bring the perpetrators of war crimes to court, however, it is not too late to make this removed page of the history of our country known to the general public, a page with which public opinion should finally confront ".