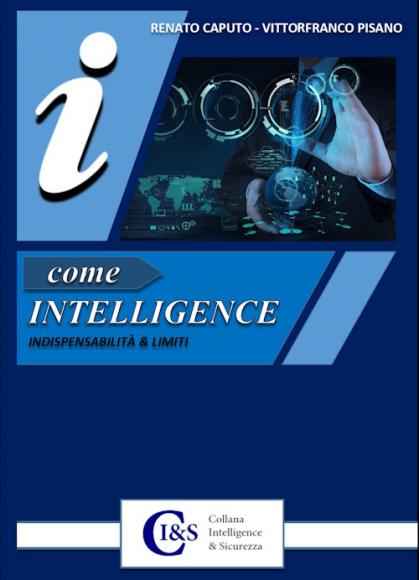 Follow-up of The information system for the security of the Republic (you see), the new book by Renato Caputo, co-written with Vittorfranco Pisano, deals in an organic way with the problem of Intelligence, understood as a structured analysis of the information collected and their functional use for the security of the State. Some procedures are not exclusive, being also used by industrial groups and private research centers, but here we focus solely on the activities carried out by state bodies responsible for collective security. Which no longer concerns only the strictly military sphere or internal security, but also strategic sectors related to information technology, energy resources, communications, patents and now also to the pharmaceutical sector, as is evident in times of Covid-19. In this study, therefore, the problems, procedures and limits of intelligence are addressed, and it is perhaps the first time that the subject has been addressed in its complexity in Italy.

The first function of intelligence (§ 2) is to seek and analyze information functional to one's strategy. An easier undertaking today, given the enormous quantity and quality of data freely accessible on the net and beyond; but also more complex, both due to the amount of data itself and because it is in the environment all-source data belonging to different classes must be compared and structured, as in the case of Big Data. And here the reader must familiarize himself with an arc of acronyms: an arc that starts from Open Source Intelligence (OSINT), passes through the human one (HUMINT) and expands into the technical one (TECHINT) with its specific sectors: SIGINT, COMINT , ELINT, TELINT, IMINT, MASINT, ACINT, RADINT (§2.3.2). All so that the data collected is then structured and analyzed correctly, what the British call finished intelligence.

The second function is Counter-intelligence (§3), in its two aspects: defensive and offensive. The first is part of the culture of safety /security (it would be ideal to include it in civil education) and includes the protection of data, places and people according to specific protocols, starting with the NOS (security clearance) and the classification of documents. The offensive function, on the other hand, has not only a preventive character, but can even exploit and overturn the dynamics used by the enemy.

The third function of intelligence includes the covered operations (§4), and it was time to clarify: the common people are aware of this from spy novels and films, where there are few reliable authors (Frederick Forsyth is cited, I would add John le Carré). In reality, the operations covered represent only a part of the institutional tasks of the Services, and certain unscrupulous initiatives to influence politics, public opinion or the market are also practiced by industrial or commercial lobbies. The only difference is legitimacy: if they do not fall within the Reason of State, disinformation and / or dissemination of false documents are crimes; least of all sabotage, the clandestine capture of people or their physical elimination1. Nor are secret negotiations (officially) allowed with criminals or terrorists to obtain armed truces or exchange of prisoners. These operations are widely discussed (§4.2 et seq.) And we also find some surprises2. The only observation: broadcast radio transmissions (§4.2.2) can be considered clandestine broadcast during the Cold War? It is clear that they came from state or parastatal broadcasters. But propaganda is not always so brazen and now the well-orchestrated shows it fake news Network. But on the counter-information we now also have a freshly printed book: Operation Dragon: Inside the Kremlin 'Secret War in America / R. James Woolsey, Jon Mihai Pacepa. New York, Encounter Books, 2021. Those who still had doubts, better read it: the counter-information activity has never stopped, indeed after the Cold War it has even increased, given the new strategic horizons and the entry of China in the agone.

Technology at the service of intelligence (§5). What is at stake is the superiority of information, therefore the assigned resources and the degree of specialization of the personnel weigh heavily, as they must intercept a huge amount of signals of all kinds, penetrate the communication networks of others and defend their own, which literally involves investments. stratospheric. Communications Intelligence (COMINT, §5.1.1.) Intercepts and analyzes the electromagnetic communication signals, while the signals that do not contain communications (e.g. radar emissions) are dealt with by ELINT, Electronic Intelligence (§5.1.2 ). The acquired data are then transmitted and subsequently forwarded to the recipient; only afterwards it is possible to pass to dissemination (already seen in §2.3.5). IMINT, the Imaging Intelligence (§5.2) deserves a separate line. The analysis of the images is not only used for military purposes, but also for industrial purposes: it identifies structures, forces, operating environment, movements, but the images do not all have the same resolution and / or come from different sources, so they must be reworked electronically and above all interpret, Here too, technology now expands the limits of the old subjective examination. Finally, GEOINT, Geospatial Intelligence, integrates IMINT and geospatial information (§5.3). But for those who want to improve there is still the MASINT (§ 5.4), Measurement and Signature Intelligence3, which detects locates, monitors, identifies and describes the unique characteristics of dynamic target sources. We use radar, laser, optical, infrared, nuclear radiation, radio frequency, seismic detection systems. MASINT is reliable because it derives data from the emissions and performance provided by the lens itself at the precise moment of detection.

The financing of terrorism (§ 6) starts from the assumption that international terrorism has a constant need for money and that the fight against this financial flow must intercept its movements. International cooperation is expressed through the Egmont Group of Financial Intelligence Units and the JIT (Joint Investigation Teams), investigative teams with targeted missions. But the enemy also uses elusive systems: thehawala (hence the Italian: endorsement) (§ 6.1) and cryptocurrencies (§ 6.6). L'hawala - also used by immigrants - makes use of informal intermediaries and allows you to transfer money even where there are no banks, so it escapes financial controls and tracking. Cryptocurrencies, on the other hand, are the new frontier of money laundering and are not the monopoly of terrorists. The documented case history is interesting, never seen before (pp. 81-86).

In §7, Intelligence services: structure and human resources, we speak of the binary subdivision of services (internal and foreign), of the various national branches (complex that of the USA, with 16 agencies), of the relationship between center and Antenna o residentura. The difference between organic personnel and external collaborators is also clarified (§ 7.2-3), the variety of which goes beyond the stereotypes of spy novels. Recruiting and managing outsiders is a delicate operation and requires great caution (§ 7.2).

With the'Honey trap and the sexpionage instead we have fun (§8). The seduction and blackmail of the official or businessman is a classic, now updated to the digital age. But STASI even ran specific schools to seduce the "chickens" and secretaries who worked in key posts, a practice favored by the German shortage of men (who died in the war). Agent Romeo (§ 8.1) is an icon of the Cold War, but still too many entrepreneurs and officials let themselves be framed by the beautiful Tatiana, the Chinese girl or the courteous oriental who gives you the data-sucking pen-drive at the fair.

§9: Identity of coverage and operational dynamics. Some coverages are classic, institutional: diplomatic offices, cultural institutions and offices of international organizations. Unofficial coverages (§ 9.2), inserted in existing or created commercial firms, are less visible ad hoc. Even more elusive are the fictitious identities, such as that of KGB agent Rudolf Abel4.

in relations between intelligence services (§ 10) there is much insistence on the need for collaboration between services, law enforcement agencies and allied counterparts. Reality, on the other hand, is often conditioned by mistrust, hierarchies and whatever else slows down theinformation sharing (§ 10.2), even in the presence of specific agreements (UKUSA, NATO)5. In reality, there are peer services and hegemonized services (§ 10.3). Hegemonized were certainly those of the Warsaw Pact, but it is not certain that, for example, the exchange of information between US and Italian services was equal. In fact, nothing is more delicate than conflict between secrecy and transparency (§ 11), both in relations between services and towards one's own public opinion, given that now the specter of espionage understood as the disclosure of confidential information also extends to the economy. Another is the so-called news leak (§ 11.2), which is actually piloted. The Wikileaks affair (since 2006) remains ambiguous: journalism or espionage? Is endangering the lives of officials and soldiers mentioned by name and surname really investigative journalism? The question remains open.

§ 12. Challenges, conditioning and limits of intelligence. Nowadays we talk more and more about security and less about defense. A strictly military vision of the concept of national power / power, now extended to economic, ecological and domestic aspects, has been overcome. Security means protection of related national and social interests; however, too many factors make the concept relative. And if politics fails to identify national priorities and interests, adequate resources will not be assigned to security. Other limits are technical (§12.4): the size of the OSINT, the long HUMINT training, the limitations of SIGINT, IMINT and MASINT linked to their own technology. Last limit, the human one: often clear signs were not understood in time. And in fact the last chapter (§ 13) is an a posteriori analysis of the "11 September case" and the importance of synergy between institutions. Taken individually, the elements of that incredible attack were nothing new; all together they became a Happening unique and unrepeatable. What went wrong? Above all the coordination between different bodies, which have now underestimated the signals, now have not transmitted them in time to those who could analyze them better, apart from the very fragmentation of the security agencies (at the time 14) and above all the excessive trust in ELINT at the expense of HUMINT. Hence the need for synergy between different and international institutions, overcoming mutual distrust and directing resources into strategic sectors. In the appendix, an updated bibliography.

1 The Israeli Supreme Court in 2005 ruled that "it cannot be established a priori that any execution is prohibited by international law". But it is a one-sided interpretation.

2 Between 2004 and 2015, the Italian government spent more than 37 million dollars for the release of 11 fellow countrymen taken hostage. But officially we never paid any ransom.

3 In the opinion of the authors (§ 5.4.1) our official definition meets the requirements for a thorough understanding of this branch of intelligence: "Research and elaboration of technical-scientific elements (...) of events and objectives of informative interest in order to locate them and identify their salient characteristics". Glossary Intelligence: the language of information organizations / Presidency of the Council of Ministers, Information Security Department, 2019.

4 KGB Colonel Rudolf Abel, who entered the US in 1948, was in charge of the spy network until 1957. Discovered and arrested, he was released in 1962 in exchange for Francis Gary Power, the pilot of the U2 plane shot down in 1960. In 1990 the USSR dedicated a stamp to Abel and the character was played in 2016 in the film The bridge of spies.

5 UKUSA is the initials of the SIGINT sharing agreement signed in 1946 between the UK, USA, Canada, Australia and New Zealand.

Angelo Acampora Ed. Odoya, Bologna 2017 pp. 222 The author, historical researcher and author of other essays on spies and ...
983
Read

Vincenzo Sinapi Ed. Mursia p. 250 “I had to witness scenes capable of making you lose your mind. Sure they were ...
1896
Read