Home Recommended Reviews Nicola Cristadoro: The move of the Dragon 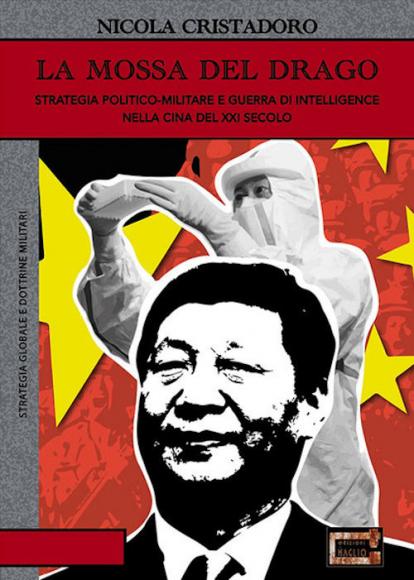 Security and espionage services, but also national interests and the ways in which Beijing pursues them around the world.

We talk about this and much more in the "The move of the Dragon", The new book (Ed. Il Maglio), by Nicola Cristadoro, who after having dedicated himself to the Russian military doctrine1, now returns to the bookstore with a work entirely aimed at China.

It is a precious work, the result of a long and detailed scientific research, made possible by the particular speculative ability of the scientist and the intellectual passion of the specialist.

With the "The move of the Dragon”, The author gives us a text destined to remain for a long time, at least in the context of national scientific production, as a fundamental work.

In fact, no one had ever attempted with such a level of detail, in a subject so broad and by its nature vague, both for the intrinsic difficulty of finding reliable sources and for having to choose, among the many, the less permeable ones. to underlying prejudices.

Cristadoro's book, on the other hand, provides us with a point of view on what is currently the Chinese strategy of the XNUMXst century, accompanying us along a path that originates from the cultural roots of Middle-earth, illustrated in detail and compared with those of the West.

The result is a comparative analysis, both on the anthropological level between the Chinese and Greek civilizations, and on the more purely philosophical one among the main thinkers: Confucius and the Buddhist and Taoist precepts on the one hand, Aristotle's philosophy on the other.

A comparative approach, we said, which highlights the differences between our civilization and that of China, partly summarized in the dichotomies: "individual - mass", "intellectual curiosity - unconditional acceptance of what is imposed from above", "openness to others - Han ethnocentrism ".

Western logic, on the other hand, is essentially linear, rational, deterministic, all centered on the balance of forces as a necessary condition for prevailing.

It contemplates the physical destruction of the enemy, its annihilation, as the end of every war militarily, unlike the Chinese one which prefers long times to immediacy, the low profile to demonstrations of strength, and prefers situations that may be favorable even in the distant future.

Cristadoro, in fact, clearly describes how China prefers to achieve the "Shi ", which we could translate as the preventive acquisition of a strategic advantage, to be patiently conquered in all domains of the confrontation with the adversary (and not exclusively the military one).

It follows - continues the author - that in Chinese thought the strategic environment has "an all-encompassing dimension since it includes political, economic, military, scientific, technological aspects”, To dominate which it is preferable to start well in advance, trying to create the right conditions, thanks also to the use of stratagems, to induce the opponent to make decisions favorable to our success.

Starting from these premises, the scholar dedicates space to the national interests of the Dragon, classified and illustrated in depth, and to the way in which Beijing adapts its posture on the basis of their pursuit.

The main scenarios, internal and external, are then analyzed, which today see China active more than ever: in the South and East China Sea, on the border with India in the areas of Tibet and Kashmir, in the northwestern region of Xinjiang, without to overlook the persecution of the Falungong spiritual discipline.

The discussion is completed by a detailed description of the Chinese intelligence apparatus, from how it is organized to how it operates at home and in the world, up to the operational procedures that envisage, among other things, the continuous involvement of the diaspora.

Whose components act always like deep water fish, real sensors under the orders of the central government, providing Beijing analysts with material that may not be excellent in quality, but in such quantity that, passed through the scrutiny of the bodies in charge, it still manages to allow information at all levels.

Finally, there is also room for an overview of Sino-Russian relations, which sifts through the main fields of collaboration, giving the reader the opportunity to evaluate future scenarios and possible developments in the field of relations between the two countries.

For these and many other reasons, the reading of "La mossa del Drago" is confirmed, like the other works by Nicola Cristadoro, absolutely recommended not only for professionals, who will find food for thought for future research thanks also to the extensive bibliography of reference and the amount of sources cited.

But also for those who intend to deepen their knowledge of a subject, apparently of a niche, but which instead confirms itself more and more central to understanding the current posture of the Asian giant and its possible (or probable) future choices, even in fields - not least that economic - which we Westerners are mistakenly led to place outside the perimeter of a state's security strategy.

Calogero Vinciguerra Published by the author pages 188 The world is evolving faster and faster, thanks to the immense possibilities ...
528
Read

Jacopo Gualario Ed. Youcanprint, 2022 pp. 118 From the covid-19 pandemic crisis to the most recent armed conflict between ...
349
Read

Marco Rottigni, Andrea Danesi Visconti Published by the authors pages 224 The decadent world of the near future, a famous ...
545
Read